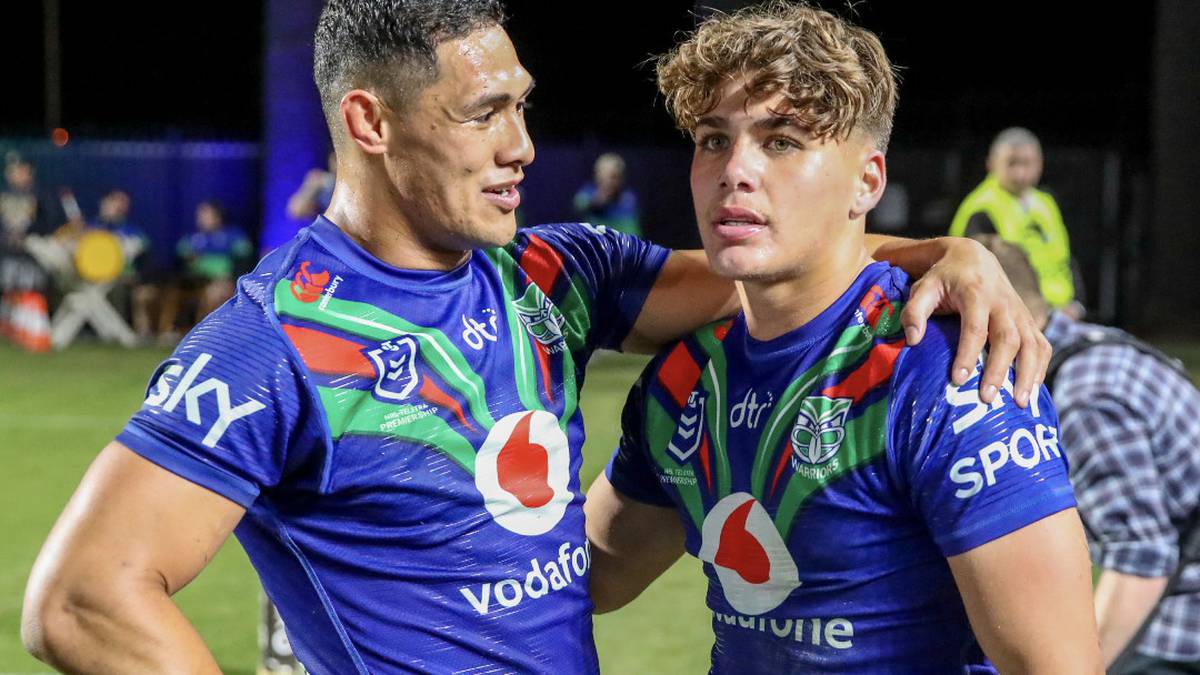 Direct intervention from two of the Warriors’ senior players allowed Reece Walsh to steal the show on Friday night against the Tigers.

The 18-year-old was outstanding in the 30-26 victory, setting up three tries and scoring one of his own in a virtuoso performance.

But coach Nathan Brown revealed that Walsh had been set to start from the bench, until he was convinced otherwise by Roger Tuivasa-Sheck and Addin Fonua-Blake.

“It doesn’t happen too often does it,” said Brown, when asked if he had seen many teenagers play like that. “The credit needs to go to Roger Tuivasa-Sheck for coming and seeing me, with Addin Fonua-Blake, and saying we want to put the kid in the team and I’ll happily go to the wing.”

Walsh started against the Storm (fullback) and Cowboys (five-eighth), before being used as an interchange option in the last two games.

“I’ve been quite protective of the young bloke and if it wasn’t for Roger he would have come off the bench,” said Brown. “They were pretty clear they wanted him out there and he did well.”

One of the most impressive aspect of Walsh’s performance was his confidence and mental strength.

He was partly at fault for the Tigers’ first try – allowing Luke Garner to reach a grubber that should have been cleared – but didn’t let that affect him.

Later in the first half Walsh almost had a long pass intercepted but wasn’t afraid to try again in the next set, which led to the Warriors’ third try.

It won’t always be easy from here, as his game will be analysed rigorously by opposition coaches, who would have noted the danger he poses.

But he has rare vision, able to see passes that others can’t, and the knack of making difficult plays look easy. And blinding pace.

Brown emphasised that Walsh has a lot to learn, especially on the defensive side of his game.

He stopped short of saying that Walsh would be a fixture at fullback for the rest of 2021, as the club will assess how he is handling the physical load during the bye week which follows the Cowboys’ game next Friday.

Walsh will steal the headlines this weekend, but it wasn’t a one man show.

As Brown pointed out, Tohu Harris was the Warriors’ best player, with a staggering workload. He played 80 minutes in the middle, with 18 tough runs for 160 metres as well as 45 tackles.

Wayde Egan (55 tackles) and Jazz Tevaga were able lieutenants, in a strong effort by the pack, while Eliesa Katoa made a welcome return with some powerful charges.

Tuivasa-Sheck put in his usual tireless effort, especially during a period of Tigers dominance in the first half and ran for a game-high 272 metres, while Kodi Nikorima laid on two tries in a return to form.

It was a crucial win, but once the dust settles, the Warriors will be disappointed that the Tigers came so close, with a chance to snatch victory in the final seconds.

While the Warriors’ comeback was impressive – especially as they were down to 12 men for 20 minutes of the second half – they again made things hard for themselves.

Two of the Tigers’ four tries came from fairly innocuous kicks, while errors put the team under pressure for long periods.

That allowed the Tigers to stay in the contest and a better team may have punished the Warriors for their profligacy.

“A lot of stuff they got, we gave,” lamented Brown. “We just give too much cheap possession at the wrong times; we give up a cheap try from a kick which we should clean up, we make a line break and we kick it as opposed to pass to someone. We do things where we make the game too easy for the opposition.”

It was speculated that wing Ken Maumalo had been dropped due to form, however Brown said a slight calf injury had played a part in the decision.