The Warriors have held a series of “frank and open” club-wide discussions to ensure what is now a two-year stay in Australia does not derail their 2022 campaign before returning home to New Zealand.

Warriors chief executive Cameron George has bullishly dismissed suggestions their extended stint away from home played any part in embarrassing recent losses to Melbourne and Cronulla, delivering the same message to Nathan Brown, his players and staff this week.

The club’s looming permanent return across the Tasman for a July 3 homecoming could also significantly reshape the Warriors’ roster as marquee prop Matt Lodge continues to weigh up his future beyond 2022.

Brown conceded on Wednesday that Lodge “was looking more likely [to be] staying Sydney” for family reasons, following the lead of Kodi Nikorima and Euan Aitken.

However, George insists homesickness is not a valid justification for a 60-point thrashing from the Storm and being comfortably beaten by a Sharks outfit reduced to 11 players in the past three weeks.

“No excuse, no excuse whatsoever,” George told the Herald. “It’s got nothing to do with not being at home, it’s just performance-based.

“We’ve just got to get off our arse and get it right. I’m not going to dance around it. Staff know that, players know that and that’s the expectation. Get it right.

“In the last three weeks we’ve seen an absolute towelling up, then a fantastic fightback against the Raiders and then we lost our way [against Cronulla]. There were certainly some frank and open discussions about that and that’s the mood going forward.

“We had reviews across the board, staff and players. We all know what the expectation is for the coming weeks, and that’s to perform and stop leaving ourselves open to more criticism and more challenges for our results and our season.” 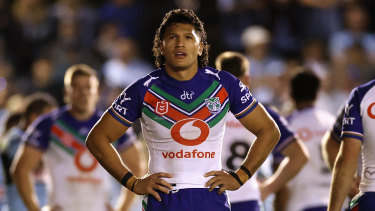 Dallin Watene-Zelezniak wonders where it all went wrong against an 11-man Sharks side.Credit:Getty

George dismissed suggestions of trying to organise an earlier return than the scheduled round 16 clash with Wests Tigers at Mt Smart Stadium as “a stupid idea” that “doesn’t understand the commitments we have as a club”.

He plans to again raise the prospect of rival clubs taking 2023 home games to various New Zealand venues, to reward league-starved Kiwi fans, at a CEOs meeting on Thursday.

The Warriors face South Sydney and Nikorima on Saturday afternoon at Magic Round after both he and Aitken told the club late last year they did not want to cross the Tasman permanently next season. Both have since been touted as options for the Dolphins given the Rabbitohs signed Nikorima for only the rest of 2022.

Lodge, meanwhile, knocked back a three-year extension offer during the pre-season and hasn’t taken up a 2023 option in his favour as it stands.

He has strong links to the Dolphins, whose recruitment manager Peter O’Sullivan is his father-in-law; while coach Wayne Bennett signed him at Brisbane after a three-year exile from the game.

Asked if he thought Lodge would be at the club next season, Brown said: “I couldn’t answer that one honestly. If I answered one way or the other I’d be throwing a dart, so I couldn’t give you a true indication.

“His football will provide opportunities for not only us but other clubs to be looking at him. I thought he was our best player last week and he’s certainly starting to get some real consistency about what he’s doing.

“If Lodgey keeps playing as is, he’ll sell himself somewhere.” 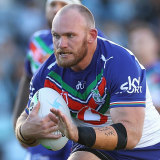 Matt Lodge has been one of the Warriors best in 2022.Credit:Getty

While the Warriors have long preferred to keep Lodge in an impressive front-row pairing alongside Addin Fonua-Blake, his potential exit at the end of the season would mean the club would need to hit the market once more.

George says no other players had expressed a desire to stay in Australia when the Warriors return home, declaring: “Everyone’s going back to New Zealand. You don’t sign with a New Zealand club thinking you’ll be playing in Australia. We don’t sign players that way.”

Chanel Harris-Tavita’s management meanwhile is due to meet with Warriors officials at Magic Round as he weighs up a two-year extension amid rival interest.

As it stands the injured playmaker is considered more likely to re-sign than leave. Harris-Tavita is sidelined for another two weeks after successful surgery on a ruptured testicle he played on with against Melbourne, and may return to the paddock wearing a cricket protector.

Stream the NRL Premiership 2022 live and free on 9Now.