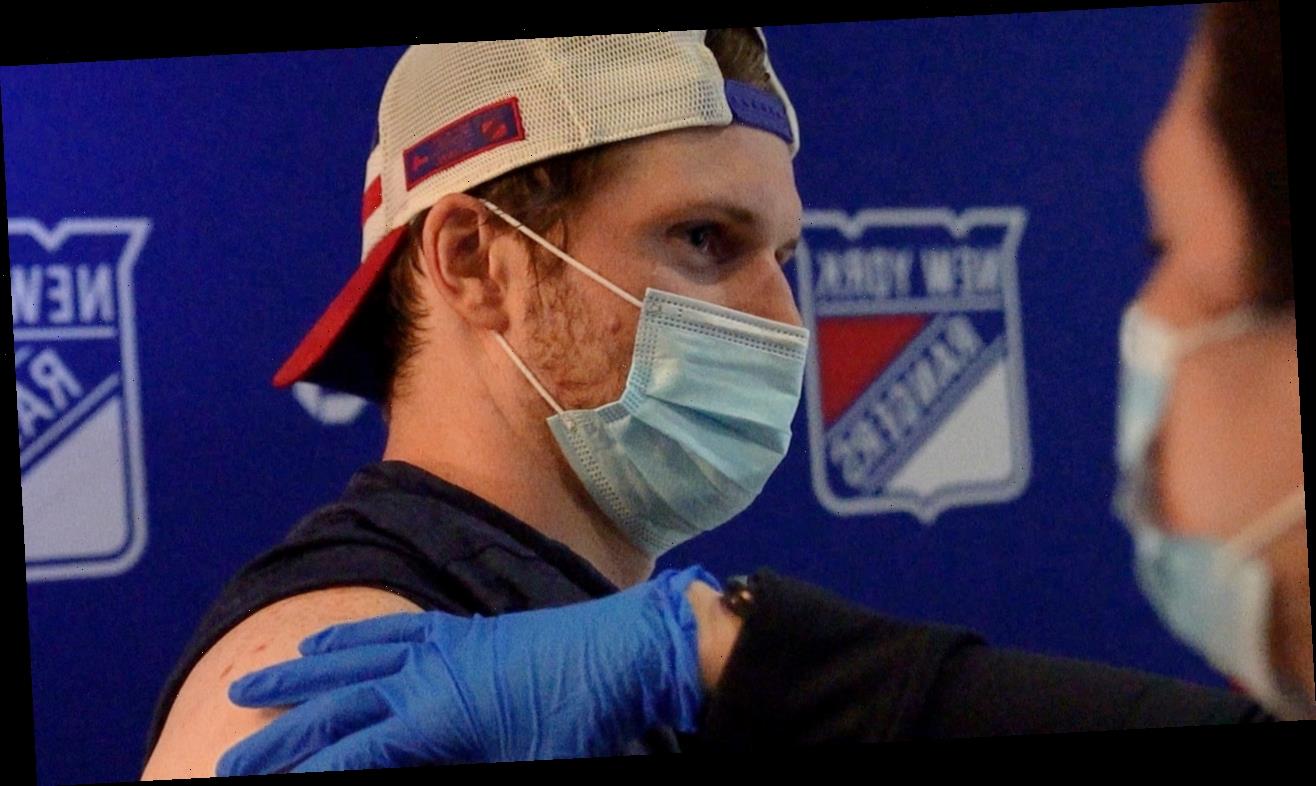 His smile covered by a light blue surgical mask, Jacob Trouba’s eyes shined as the needle went into his left arm.

The New York Rangers gave players, coaches and staff a day off this week so they could get vaccinated against COVID-19.

“We’re very fortunate to be able to get that vaccine,” Trouba said.

As vaccinations ramp up past a pace of 3 million a day in the U.S, the NHL is in a tougher spot than the other three major North American professional sports leagues because seven of its 31 teams are based on Canada. While the NFL, NBA and Major League Baseball are relaxing virus protocols when a certain percentage of each team is fully vaccinated, the top hockey league in the world is facing a severe outbreak with the Vancouver Canucks and grappling with vaccine inequity on opposite sides of the border.

“It all comes down to the government guidelines, and it’s out of our control,” U.S.-born Winnipeg Jets goaltender Connor Hellebuyck said. “You definitely see the States getting out the vaccinations well and it’s very good, very nice, and it’d be nice to see that in Canada, but I don’t know the logistics of it all.”

Canada has lagged in vaccinations because, like many other countries, it lacks the ability to manufacture vaccines and has had to rely on the global supply chain. While hope is on the way with 45 million doses expected to be available by July for the nation of 38 million people, cases in Canada are surging, and the NHL is not immune.

The Canucks reported 21 players and four staff members tested positive for the virus and another is considered a close contact. Team physician Jim Bovard called the outbreak “a stark reminder of how quickly the virus can spread and its serious impact, even among healthy, young athletes.”

The NHL got around the U.S.-Canada border being closed to nonessential travel by making this 56-game season divisional play only, with the seven Canadian teams only facing each other.

And because of that split, hockey has mirrored the evolving virus situations in the U.S. and Canada. From Jan. 13-March 31, players on Canadian teams accounted for just 103 of the 1,361 appearances on the NHL COVID protocol list — with just one of a season-high 59 players Feb. 12.

Since April 1, players on Canadian teams have accounted for 115 of 135 instances, including 23 of 25 Wednesday.

As of Thursday, roughly a third of the U.S. general population received at least one dose and 19.4% is fully vaccinated, compared to 11.91% with one shot and 1.76% fully vaccinated in Canada.

“There’s two different countries, different roles, different situations,” Sweden-born Calgary Flames forward Mikael Backlund said. “Nothing we can do about it, really. So, we just have to wait for our turn.”

The Associated Press asked all 31 NHL teams how many players, coaches and staff had been partially or fully vaccinated and if any had refused a vaccine, and none would provide specific details. Among the responses, the Tampa Bay Lightning said some players and staff had been vaccinated, the Rangers said many were getting a shot, the Detroit Red Wings said a majority and the Columbus Blue Jackets a vast majority of players and coaches had received at least one dose.

NHL deputy commissioner Bill Daly said the league is “monitoring, but (the) vaccination process is very much team by team and market by market.” Along with the league, the Players’ Association sent a memo to members and is working to educate them and answer questions about vaccination, which is being handled by individual teams.

With U.S. President Joe Biden setting an April 19 deadline for all 50 states and the District of Columbia to open up vaccine eligibility to everyone age 16 and up, the NFL, NBA and MLB — with all teams currently playing in the U.S. — instituted incentives that relax masking and other protocols based on a certain level of personnel being fully vaccinated. Memos were sent to players and teams last week reminding them to adhere to protocols — even if fully vaccinated.

“It’s an equity issue because some people don’t have access to vaccine, like all of Canada, so that becomes a problem,” Rutherford said.

Edmonton coach Dave Tippett, who has not yet been vaccinated, said the team doctor this week reiterated the importance of adhering to protocols, especially because of Vancouver’s outbreak.

“We’ve been concerned since the start of the year,” Tippett said. “We want to try to keep the virus out if we can if all possible, so you recognize when other teams are going through it, you want to try and do whatever you can to stay away from it.”

Not that there isn’t concern among the 24 U.S. teams, such as in Detroit where cases are surging, but high levels of vaccination among players and staff provide some comfort. While Red Wings forward Darren Helm was still on the fence, citing recent recovery from COVID-19, coach Jeff Blashill got his shot and is a vaccination advocate, along with many around the league who have spoken out to encourage it.

“The more people that can get vaccinated, the better chance we can get to all living as closer to normal,” Blashill said.

Carolina coach Rod Brind’Amour drives past a mass vaccination site outside the arena each day on the way to work and called it a sign of progress. Grateful to get his shot, the Canada-born Brind’Amour knows the situation isn’t the same back home and is hoping for the best.

“It’s a little slower up there,” he said. “You’re just hopeful that we can get it into everybody as quickly as possible.”