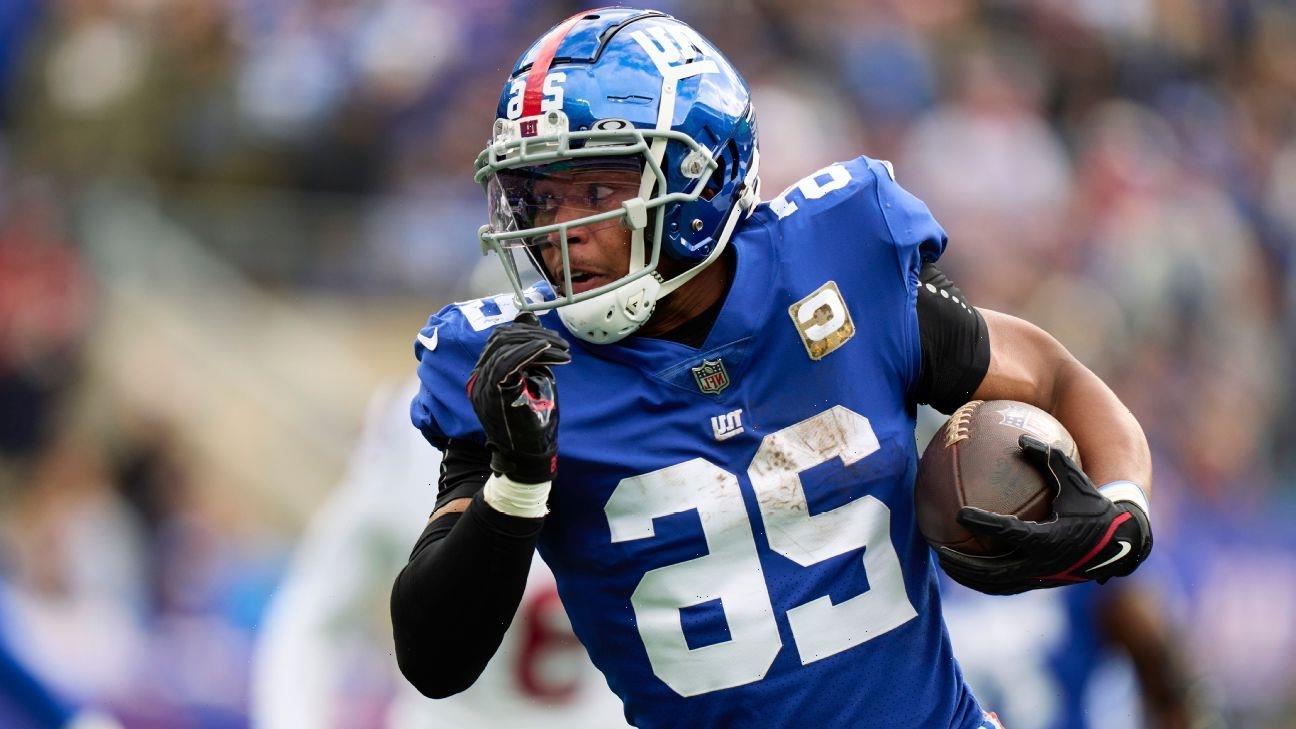 The G-Men fell to the Vikings, but Minnesota’s defense remained generous to New York’s skill position group, allowing Daniel Jones and Darius Slayton to hit their respective overs. New England tried to keep Ja’Marr Chase in check, but the former LSU standout still managed 79 receiving yards, which was 7.5 yards more than the line proposed by Caesars. An unexpected game script and a leg injury both worked against Jamaal Williams in Week 16.

Ultimately, three of my five picks hit. I’m motivated to improve on those results this go-around. Utilizing ESPN’s metrics database and some assistance from stats ace Kyle Soppe, I’m here to help you secure the bag in fantasy and at the books.

Miscommunications. Dropped passes. Injuries. It’s been months of inefficiency from Rodgers and the Packers offense. Green Bay, however, is still in playoff contention and hosting an uber-generous Vikings offense in the fantasy finals. That put Rodgers in a top-10 hero spot, which feels particularly on brand this year.

Rodgers is outside of the top 12 QBs in terms of passing yards per game (222 yards). At home, however, he’s managing 10% more yards per pass. With Aaron Jones battling knee and ankle ailments, it’s likely Rodgers shoulders the load Sunday, tossing the ball at least 35 times over the game’s 60 minutes. If he’s throwing the ball more frequently and further down the field then at least 250 passing yards is achievable.

That modest goal becomes even more attainable when considering the matchup. Minnesota has allowed the most passing yards to QBs on the season (4,441) and the second-most passing yards over the last four weeks (1,215). Christian Waston’s hip injury is certainly concerning, but Rodgers doesn’t need an elite arsenal to take advantage of Minny’s secondary. The Vikings have given up over 300 passing yards in four of the team’s last five outings. Mac Jones, Mike White, Jared Goff and Daniel Jones were the opposing headliners in those matchups. Hardly a murderer’s row.

Cousins has been a steady producer for fantasy managers throughout 2022, averaging 18 fantasy points per game. Attached to one of the fastest offenses in the league (2.24 pace of play, QB4), Cousins is averaging 39.5 pass attempts (QB3) and 6.7 red zone attempts (QB2) per contest. That sort of volume in combination with an elite pass-catching group translates into top-eight overall fantasy numbers.

While Justin Jefferson has saved Cousins plenty of times, throwing the ball 40 times a game can inevitably lead to mistakes, particularly in a matchup like this one.

While this game isn’t in prime time, it’s still a spotlight matchup with massive postseason implications. I don’t think that sets Kirk up for a clean outing, particularly when noting that Green Bay owns the second-highest turnover rate on the season. Furthermore, Vegas has the Vikings listed as 3-point underdogs. Pressing can get any QB in trouble, but Cousins has proven more susceptible to errant decisions when chasing The Pack. In fact, Captain Kirk has thrown a pick in every loss to Green Bay. His INT rate is also significantly higher outdoors (3.4%) than indoors (1%).

As a Bears fan, I’m screaming SKOL. But as an analyst, I’m betting on messy.

Goff, league winner? It sounds crazy, but he’s currently fantasy’s QB10 overall. He has also passed for over 300 yards and recorded multiple TD efforts in three of his last four games. As 6-point favorites versus a banged-up Bears squad, there’s trepidation that he won’t have to air it out. Yet, Goff has cleared 330 passing yards in all four games as a favorite this season (and he’s been a top-four FF QB in each of those outings).

Whether it’s the grit my colleague Daniel Dopp (and ESPN Fantasy’s resident Lions fan) refers to or the matchups or something more, Goff has been on a tear since Turkey Day. The former Ram has posted a pass rate of nearly 63% (11th highest) from Weeks 13-16. Even better, more than 75% of the team’s yards have come via that air over that window of time. Noting that this game is at Ford Field, only betters Goff’s chances of staying on track, as he’s managed 10 more fantasy points per game and an aDOT of 7.16 when at home.

The matchup is plumb, as well. Rolling out a decimated defense, Chicago ranks 30th in yards per pass and yards per catch while coming in 31st in pressure rate and sack rate. Given the ease with which opposing offenses have thrown against the Bears, Goff may not even need to put the ball in the air 30 times to clear the above line.

Despite a slow start to 2022, Godwin has ROI’d for PPR enthusiasts down the stretch, averaging 8.2 catches and 18 fantasy points per contest since the Bucs5′ Week 11 bye. While Tom Brady has struggled to connect with Mike Evans (45% target conversion rate), his chemistry with Godwin has flourished. In fact, Godwin has maintained a catch rate of nearly 89% over the past two weeks (63% catch rate for all other Bucs).

The last time these two teams met, Godwin drew 13 looks. That’s a lot of bites at the apple! And those nibbles could turn into chomps when facing a Panthers defense that has allowed the third-most yards per pass to opposing slot receivers over the past month. Godwin has owned the slot in 2022, leading the league with 6.7 slot targets per game.

The key to hitting the over on yardage is either big plays or lots of volume, and Godwin certainly sets up to crush the latter half of the equation. He figures to flirt with seven grabs, 70 yards and top-12 WR numbers on Sunday.

A vintage looking Saquon dominated for much of 2022, averaging over 18.4 fantasy points per game (RB5) and clearing 20 fantasy points in back-to-back outings. Rostered on 40.2% of championship contending teams, Barkley has thrived as the engine of virtual teams as well as the Giants’ offense (82.2% opportunity share, RB3). He figures to go off again as the 5.5-point favorite in an all-important outing versus Indy on Sunday.

The Colts’ run defense was stout to begin the season. Since mid-November, however, Indy’s run-stopping unit has slipped, giving up the 10th-most yards to RBs before contact from Weeks 10-16. Additionally, Indianapolis has struggled to tackle opposing rushers, allowing 1.88 yards per carry from Weeks 14-16 (up 11.2% from Weeks 1-13). Resolutions are typical on New Year’s Day, but I wouldn’t expect a turnaround from an embattled Colts club on the road and facing an RB with 17 breakaway runs (RB2) and 86 evaded tackles (RB4) on the season.

Given Barkley’s volume (18.9 carries per game, RB3) in tandem with the fact that he’s posted at least 80 rushing yards (and drawn at least eight receiving looks) in consecutive efforts, the above line feels attainable. Heck, with multiple runs of 15-plus yards in five games this year, he may not even need 18 carries to post 80 rushing yards. In the final year of his deal and with the Giants still in playoff contention, Barkley figures to run hard and far. He’s a top-three play this weekend.

Campbell is my favorite WR sleeper for Week 17. His 4.3 speed and big-play ability have regularly shown up after the catch this season (3.3 yards per target). He also ranks ninth in routes run (520) while recording nearly 77% of his snaps in the slot. That sets up nicely when facing a Giants secondary that has allowed the eight-most yards per slot completion. Additionally noting Nick Foles’ affection for the slot — he’s averaged more yards per attempt to the slot than all other passes over the course of his career — Campbell figures to kick off 2023 both busy and productive.