Atlanta: The NFL will consider rule changes aimed at avoiding the type of officiating gaffe that likely cost the New Orleans Saints a spot in the Super Bowl, but commissioner Roger Goodell warned on Wednesday there are no easy fixes.

Speaking at his annual state of the league address ahead of Sunday's Super Bowl in Atlanta (Monday AEDT) between the New England Patriots and Los Angeles Rams, Goodell said he understood the frustration felt by the Saints and that the league wants to address their concerns. 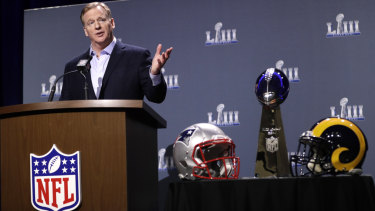 NFL commissioner Roger Goodell tackles the angst over the Saints, at a pre-Super Bowl press conference.Credit:AP

NFL coaches are currently allowed to challenge a referee's decision but they cannot query judgment calls on either penalties or uncalled penalties.

Goodell said the league had worked hard for years to bring technology in to help with officiating but stressed that while technology is not going to solve all those issues, it has to continue down that path.

"The other complication is that it was a no-call and there has not been support to date about having a replay official or somebody in New York throw a [penalty] flag when there is no flag.

"They have not voted for that in the past. It doesn't mean that we won't, it's something that we are going to put to the competition committee and see if there is an answer to that."

Goodell also down played the idea of adding more officials, noting that might only add problems, not reduce them.

"I don't think adding an official is an answer to all the issues, particularly this issue," he said.