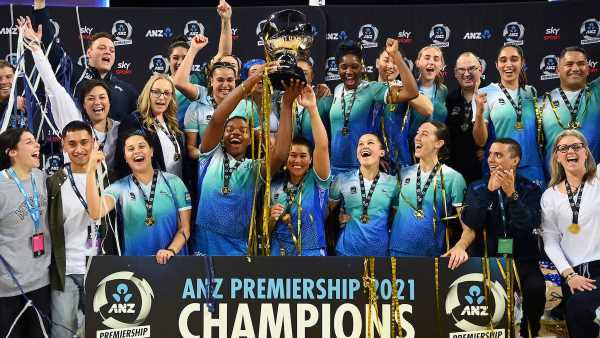 The Northern Mystics have claimed their first ANZ Premiership title with a 61-59 win over the Mainland Tactix in the grand final on Sunday night.

It was a fitting end to what has been one of the most closely matched and highly competitive seasons in ANZ Premiership history.

Victorious captain Sulu Fitzpatrick called it a “painful 60 minutes” as each team came out firing but ultimately it was the Mystics who continued their dominance from the regular season to take the title.

It was the largest crowd in ANZ Premiership history that packed into Auckland’s Spark Arena and managed to help their home side take a 17-14 lead into the first quarter after going goal-for-goal for the first few minutes.

Mystics coach Helene Wilson opted to start Filda Vui in the goal attack position instead of the veteran Bailey Mes and it paid off for her side, confusing the Tactix defenders who were clearly expecting Mes from the beginning – however she would make her appearance at the end of the second quarter.

The Mystics carried that form into the second quarter and forced errors from the Tactix to reach for a handy 33-28 lead going into the halftime break.

However, a third quarter Tactix charge saw the Canterbury side win the quarter 18-15 and set up a nail-biting final fifteen minutes as the Mystics held on to only a two-goal lead.

Ultimately it was 19-year-old Grace Nweke, playing in her first major final and netting 58 of her team’s 61 goals, that helped her side claim the two-goal victory.

She was helped by yet another MVP performance by Elisapeta Toeava who capped off an absolutely stunning season and the to-be-expected clinical and vocal showing by her captain Fitzpatrick.

The Tactix played a compelling second half but were unable to close the gap against a Mystics side who only missed five shots all game, compared to 15 from the Tactix.

Tactix defender Karin Burger showed why she was voted player of the season, picking up four intercepts and 11 centre pass receives – the second most of her teammates.

After an extremely physical season, the final was a surprisingly clean affair with only one caution handed out by the umpires – far less than perhaps had been predicted based on the trajectory of the last 15 rounds.

But it was an appropriate way for the Mystics to take their first ANZ Premiership title after many years of disappointments and near-misses.

“We’ve always had the flair and the ability but we’ve never had the discipline and that’s been the change this year,” affirmed Wilson.

Fitzpatrick promised that this was to be the first of many for the Mystics and that the time and energy spent building a premiership-winning team will be worth it for years to come.

“This is the beginning”, she said after their win. “We want to build on this, these are the foundations we’ve laid.”

After losing in the final to the Central Pulse last year as well, Tactix captain Jane Watson had every right to be emotional, but she still had time to joke to the Mystics team.

“We need to come up with a solution on how to stop that ball into Grace [Nweke] next year,” acknowledged a wry Watson.

Despite another loss in the final, the Tactix have built a highly competitive team in 2021 and no doubt will be competitive again next year, as will a Mystics side who will be riding the high of this finals win all the way into 2022.

Here’s how the action unfolded: