Winnipeg Jets right wing Patrik Laine honed his powerful right-handed shot as a youngster in his backyard in Tampere, Finland, where he would fire pucks at soda cans after watching YouTube clips of his childhood idol, the Washington Capitals’ Alex Ovechkin.

And like Ovechkin, Laine has found offensive potency on the power play. Since the start of last season, Laine, 20, leads the N.H.L. in man-advantage goals — even if his powerful shot has become detrimental to special-teams practice in morning skates.

“It’s why we rarely work on our power play in practice, because we have three guys run away from the net, and rightfully so,” Jets Coach Paul Maurice said. “The goalie sometimes, too.”

Aggregate power-play success rates in the N.H.L. have been on the rise over the last five seasons, peaking at 20.2 percent a year ago. That number and this season’s 20 percent mark so far are the highest since the 1989-90 season. With more than half of this season completed, four teams are on pace to rank among the top-50 single-season power-play rates in league history: the Tampa Bay Lightning (29.5 percent, sixth), the Boston Bruins (27.2 percent, tied for 25th), the Florida Panthers (26.8 percent, 34th), and the Jets (26.0 percent, 46th).

From the 20 coaches and players interviewed for this article, the most commonly cited reason for improved power-play effectiveness was the higher skill level across the N.H.L. The refrain was recited so universally that one wonders if the league handed out talking points.

“It used to be the young guys would come in, and they’d play on your fourth line,” Capitals Coach Todd Reirden said. “Now these guys are running the power play, playing on the half-wall, and have huge responsibilities on teams. And the skill level they have is so much different than it was 10 years ago.”

Laine embodies the prevailing explanations for a leaguewide rise in power-play success: highly skilled young players armed with more sophisticated video scouting and stacked in an aggressive four-forward, one-defenseman lineup in a 1-3-1 formation liberally borrowed from the Capitals.

Blake Wheeler quarterbacks Winnipeg’s power play from the right boards while Laine looks to find open shooting space on the other side. Washington’s Nicklas Backstrom does the same for Ovechkin.

“It’s nice when Washington plays a team before us, because how they handle Ovechkin usually is starting the trend of how they’re going to handle Patty,” the Jets assistant Jamie Kompon said, referring to Laine.

An increasingly popular power-play formation, the 1-3-1, is giving N.H.L. scorers many more options — and goaltenders many more headaches.

When Adam Oates became Washington’s coach in 2012, he introduced the 1-3-1 formation that the Devils had used when he was an assistant there. Oates was dismissed after two seasons, but his system stayed under the direction of the assistant Blaine Forsythe.

Since the start of the 2012-13 season, the Capitals have led the N.H.L. in total power-play goals (371) and efficiency (23.5 percent), with the Pittsburgh Penguins just behind in both categories (367, 22.7 percent). Ovechkin’s 128 power-play goals in the past seven seasons are nearly 50 more than any other player has scored; Backstrom’s 169 power-play assists in that time also lead the league.

The 1-3-1 is dependent on a marksman on one side (Ovechkin) and a playmaker (Backstrom) on the other, with one defenseman playing center-ice point (John Carlson), a slot player who can take quick shots and create space (T. J. Oshie) and a net player who assists puck movement down low and pursues rebounds (Evgeny Kuznetsov).

Ovechkin at times has been so tethered to the left face-off circle that the area has been called his office.

“For us, it doesn’t matter how they play,” Ovechkin said. “We all know they’re going to play different ways, and we know exactly what we have to do.”

Power plays today have fewer blueline players and slap shots from a distance, with action more side to side. The 1-3-1 creates triangular action in which attacking players typically have two good options to direct short passes.

Devils goaltender Cory Schneider said the unifying thread of the N.H.L.’s best power plays was a strong one-timer shot from the back side of the play.

“The hardest thing, I think, for a goalie to stop is the lateral play,” he added. “The shot from the top is still effective, but I think it’s option B or C now.”

Devils Coach John Hynes said the power play was less about point shots and perimeter play than crowding around the net.

“The puck, almost all the time, is in dangerous, dangerous areas, which is right around the blue paint, high tips, second chance, rebounds,” he added, “and it’s difficult to defend.” 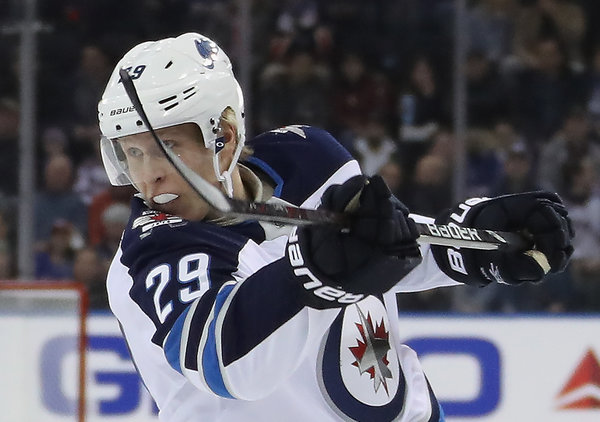 Tyler Dellow, a former analytics consultant for the Edmonton Oilers who now writes for The Athletic, noted in an article early in the season that the incidence of four-forward, one-defenseman power play formations has risen to 75 percent this season from 55 percent in 2016-17.

The trade-off of the four-forward lineup is that power-play teams are more susceptible to short-handed goals, but that corresponding increase is less than the uptick in man-advantage scores.

There also are not as many power plays as there used to be. Power-play opportunities are being granted at lower rates in each of the past 10 seasons than in any other on record. That fact, and the increase in high-end offensive skill players, has affected personnel decisions, de-emphasizing good penalty killers.

“I think teams are more committed to having four lines that can score now, and maybe there’s not as much emphasis on having two or three extra guys who can kill,” said Penguins center Sidney Crosby, whose 187 power-play points since the 2012-13 season rank him behind only Backstrom, Philadelphia’s Claude Giroux and Ovechkin.

Penguins Coach Mike Sullivan said there were not as many checking lines in the league or as many roster spots reserved for players who excelled in that aspect of the game. And the proliferation of video scouting and analytics means there are fewer defensive surprises for power-play units.

“It’s more than just passing and shooting,” Carlson said. “It’s how you set it up and certain plays that we do over and over that we know what we’re going to do, but we’re disguising what we do.”

He added, “We just make sure we’re ahead of the curve and think about things that, maybe on their first and second adjustment, we already know that that’s probably their Plan B or C.”

The evolution of Winnipeg’s power-play unit is emblematic of the league as a whole. When Kompon began leading the power play in the 2016-17 season, he said, the individual skill level was not right for a 1-3-1 formation. As players matured, the Jets’ coaches introduced it.

“All the big guns in the same power play, I kind of knew right away that it was going to work,” Laine said. “Good players can always play with each other.”

The 1-3-1 is just the starting point, after all. Lightning right wing Nikita Kucherov, whose 28 power-play points this season are tied for most in the N.H.L., said that “being unpredictable and not being stubborn” were important, too.

The scheme is a good idea, Maurice said, “but the execution finishes.”

He added, “It’s all skill level. It’s all players.”