The need for a national approach to racing was only heightened by the announcement of cuts to South Australian racing this week and it should be a major driver towards a national tote pool.

While Racing NSW leads Australia with innovation and new races and is chased by Victoria's million-dollar events the smaller states fall behind as revenue drops from governments that are simply not racing friendly. 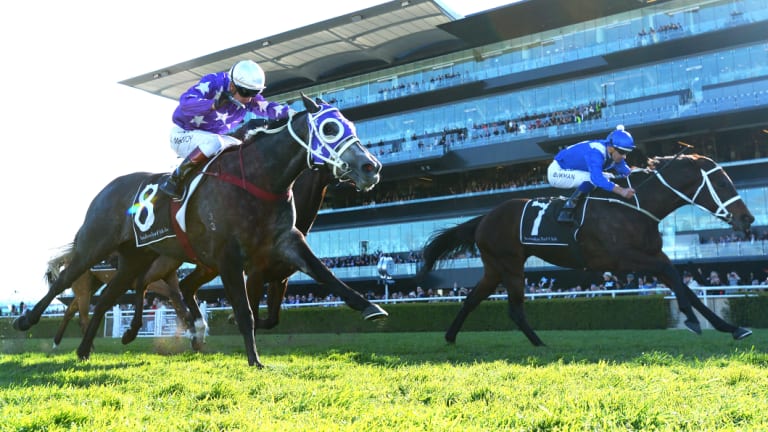 Sharing the spoils: NSW and Victoria may dominate Australian racing but a national tote is needed to help the smaller states.Credit:AAP

Queensland had to go on strike to its fair share of the point of consumption tax that has a direct effect on the sport. South Australia are far worse off and a strike there can't be far off.

The race fields fees, which continue to grow, return punters' dollars back to the state of origin, which leads to competition between the states and makes the major players bigger and stronger.

Western Australia, the only state which still owns its TAB, may hold the key to a national tote. That licence will go to tender this year and mostly likely end in the hands of Tabcorp.

That would open the path for one tote pool to be created that would work for the good of racing in Australia. It would mean larger pools and encourage bigger players back to tote, which gives the biggest return to the industry in percentage terms.

It would also be available to all, with punters that have been restricted by corporate bookmakers able to bet into a tote pool freely. The bigger the pool the more confidence.

The co-mingling of pools from around the world means each state could keep its tax regimes in place and the smaller states could get a bigger share. The competition would become how to attract punters to use your tote market to bet.

There would have to an agreement on how product fees are shared, but a national tote pool would strengthen racing.

There was a strong Christmas crowd at Warwick Farm and the Liverpool track deserve more chances to shine on Saturdays.

The area is one of the fastest growing in the Sydney basin but doesn’t get the opportunity to race on weekends too often.

There were Christmas crackers on the track for punters with Monsieur Sisu and Heart Conquered smart winners as favourites that destined for bigger things in 2019.

Racing Australia will take owners' paperwork into the digital age with the myhorseracing.horse website from January.

RA chair Frances Nelson believes it will take away the red tape, which has along been a problem with horse ownership.

“myhorseracing.horse provides racehorse owners with a safe, convenient and unique ID to enable them to conduct their transactions online to save time and avoid the need to re-enter information provided previously,” Nelson said.

“From late January active racehorse owners across Australia will over a four-to-six week period be asked to validate their myhorseracing.horse accounts.

“As soon as their account is validated owners will be able to see their horse’s details online, including nominations, acceptances, scratchings and results.

“Until now, even something as straightforward as naming a horse involved paperwork which could require contacting up to 20 owners, a process that could be lengthy and confusing.

“When myhorseracing.horse is fully operational owners will be able to provide the information needed, submit applications with a single mouse click, and instantly receive confirmation the application has been lodged.”

The paper-based system will still be available to owners as well.

One swallow doesn’t make a make summer but the reports coming out of Brisbane about the first day back at Eagle Farm are certainly encouraging.

After 18 months without a meeting, Mick Goodie, the former Flemington track manager charged with getting it back to past glories, said “as long as no one takes their eyes off the ball, this is going to be a great track for a long, long time.”

The fact a storm hit Brisbane the night before the meeting showed Eagle Farm was in great condition with Awesome Pluck running a 1000m record.

In real terms Queensland has been without Eagle Farm, its premier track, for four years when the failed rebuild started. It is a start but like the Kensington track at Randwick it has to earn everyone's trust back with sustained performance.

NSW became the final state to offer dual jockey-trainer licence this week but the restrictions are among the toughest in the country.

In the end NSW couldn’t be the only state that doesn’t offer the transitional licence. It means Melbourne Cup winner Michelle Payne can once again ride in NSW

Racing NSW's sectional times app has had a name change because of a trademark dispute with a big computing company.

Punters Intel has become Punters Intelligence but still offers punters the ability to watch a recreation of races from around the state with several features including how far each horse covered in a race and its sectional splits.