Osaka, who had emerged as the sport’s best front-runner, had won 63 straight matches when winning the first set, dating to 2016. Osaka also led early in the third set, 2-0, before Hsieh leveled and then took the lead for good, 4-3. Hsieh, a crafty 33-year-old veteran, closed out the victory on her first match point, hitting an overhead smash that Osaka blocked back, and then finishing off the point with an unreturnable slice volley.

Osaka had beaten Hsieh earlier this year in the third round of the Australian Open, 5-7, 6-4, 6-1. Hsieh has used her unorthodox game of jabs and feints to establish a reputation as a giant killer; she knocked then-No. 1 Simona Halep out of the third round of Wimbledon last year.

”It’s always great to pick up a better level during the match,” Hsieh said in her on-court interview. “Every time you’ve made it and you beat a good player, you feel: ‘Wow, this is everything. This is so amazing, and I’ve made it.’”

The loss will jeopardize Osaka’s No. 1 world ranking; it could be claimed by one of the three women ranked right below her if one advances deeply enough into the draw. 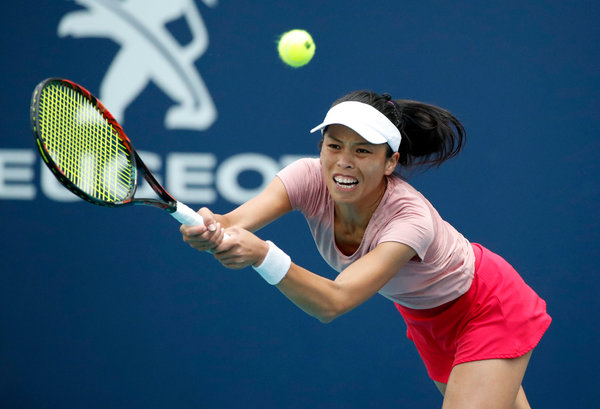 The 10th-seeded Williams, who last won here in 2015, was to face 18th-seeded Wang Qiang in a third-round match Sunday. Wang receives a walkover into the fourth round, where she will await the winner between Wang Yafan and 25th-seeded Danielle Collins.

It was the third consecutive tournament in which Williams’s body let her down before her racket did. Williams, 37, was forced to retire midway through her second match in Indian Wells, Calif., earlier this month because of a viral illness. At the Australian Open in January, Williams was leading Karolina Pliskova, 5-1, in the third set of the quarterfinal round when she twisted her ankle on match point. Though she had more match point opportunities, the injury particularly encumbered Williams’s serve, causing her to lose all 10 subsequent points in her service games.

After receiving a bye in the first round of the Miami Open, Williams survived an up-and-down second-round match against 63rd-ranked Rebecca Peterson on Friday afternoon. She had not appeared encumbered by her knee, though did struggle with blinding glare that shone on her side of the court for part of the match, through gaps at Hard Rock Stadium which is hosting tennis for the first time. Williams survived with a 6-3, 1-6, 6-1 victory but was not happy with her performance.

“I need to just move on and really focus on playing better — or not be in the tournament much longer,” Williams said in her postmatch news conference.

Where Williams will play next is unclear. The next mandatory WTA event is the Madrid Open in May, though Williams has not played there since 2015. Williams did not play any clay court tournaments before the French Open last year, as she focused on improving her conditioning and losing the weight she had gained during and after her pregnancy.

That sort of selectivity in scheduling, long a staple of Williams’s career, has increased in recent years, when she has focused more and more on the major events.