It should have been one of the happiest times of Yu Te Tseng’s life. But Tseng, the father of the world’s best male junior tennis player, lowered his head and put his right hand to his eyes, trying to stem the flow of tears.

He was sitting in a garden at the United States Open in September after his son, Chun Hsin, had won another big match. But while a friend patted him on the back, Tseng needed more than a minute to compose himself and explain his sadness.

For years, Tseng has coached his son, 17, who plans to turn professional at a tournament in Hong Kong at the end of the month. For years, father and son have traveled the globe while Chun Hsin, also known as Jason, soared from a working class background in Taipei, Taiwan, to the top of the junior tennis rankings.

He tore through the competition in 2018, reaching the final of the Australian Open junior singles tournament in January and winning the French Open junior title in June and Wimbledon’s in July. He was also a semifinalist in the U.S. Open boys event, and finished the year as the No. 1 junior.

But while he was achieving all that with his father by his side, Tseng’s mother remained in Taipei, running the family’s small food stand and looking after his 15-year-old brother, Yun Di Tseng.

For his mother, Chung Han Tsai, the heavy workload has taken a toll. 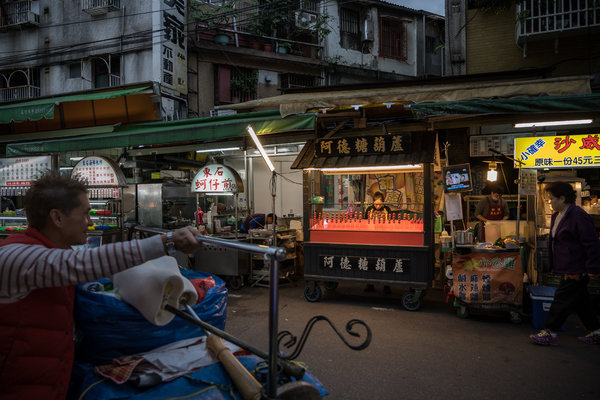 The family owns a stall at the Lehua night market in Taipei, where they sell tanghulu, a treat made of glazed fruit and tomatoes on a stick. They stay on their feet from 4 p.m. until 1 a.m., with hardly a moment to spare for a break.

When Yu Te Tseng cannot be there because of Jason’s travel schedule, his wife is left to do it alone. But she suffers from myotenositis, a severe inflammation of her limbs, likely caused by repetitive stress from doing the job since they opened the stand in 1999.

“My wife this year has developed health problems from working so hard,” Tseng said through an interpreter after his tears finally subsided. “The current situation, with us traveling and she stays at home, she is starting to feel that the body cannot hold up. I don’t want my wife to go through this. One day recently, she said, ‘I cannot do this much longer.’

“Of course, when Jason gets very successful, we won’t have to worry about the financial situation so much.”

Jason Tseng’s parents have tried to shield him from the burden of feeling like the family bread winner, and during an interview in September he said, “I never think about that.”

But they all know the stakes.

As he enters the professional ranks, Tseng is ranked No. 441. Studies have shown that only the top 100 players or so earn enough money to make a living, after subtracting travel and coaching expenses. For now, financial support from Formosa Plastics Group, China Airlines and Taiwan’s tennis federation help Tseng pay for his training and travel.

Tseng is the first boy to win two Grand Slam junior singles titles in the same year since Filip Peliwo of Canada did it in 2012. That does not always translate into success on the professional tour, though. Peliwo is currently ranked 259th, and his best career ranking was No. 161, in May. In the five years since he turned pro, Peliwo, 24, has earned $274,386, or about $54,000 a year.

Tseng, who shares a birthday with Federer (Aug. 8), certainly has the shots, tenacity and baseline power to make a living on tour. But at 5-foot-8 and 136 pounds, he will be challenged to reach the elite level in a sport that seems to be trending in favor of tall players with huge serves.

“He’s tiny for the moment,” said Patrick Mouratoglou, the coach and head of the Mouratoglou Tennis Academy in France, where Tseng has trained since he was 13. “But he’s going to be strong because he is an incredibly hard worker. You don’t need to be big to be successful. Look at Novak Djokovic, he’s the best mover on tour and he’s very light.”

From the moment Tseng arrived in France, his unrelenting work rate astounded Mouratoglou.

“He’s an incredible worker,” Mouratoglou said of Tseng. “Like, incredible. The quality, the intensity and the amount of work he is able to achieve every day is very, very rare.”

Tseng first played tennis at age 5 with his father, who likes to be called Ed. Within a few years, Jason had demonstrated unusual talent, and his father discovered that his night job was suddenly an advantage. It enabled him to train his son during the day.

On a typical day, Ed Tseng would work at the night market and get to sleep around 2 a.m. He would wake up three and a half hours later for early-morning practices, after which he and his son would return home, shower and prepare for school. The father would then sleep a bit more before rejoining his son for afternoon practice. Then it was back to work with his wife.

But once Jason began traveling for tournaments, his father made most of those trips, while his mother stayed behind to work.

“He was always with me and supported me,” Jason said, “And she worked very hard at the business. It was very good for me.”

On some nights, Jason and his brother would make the five-minute walk from their home to join their parents at the market, doing their homework there or pitching in by peeling tomatoes. But Jason’s focus and dreams were always on tennis.

“In that moment, I don’t have a lot of time to go out with friends and do relaxing things,” he said. “I was always working, working. That is how the professional player has to do it.”

Jason Tseng said he does not really like the treats his parents sell. He prefers ice cream, although he eliminated it from his training diet. He indulged in his favorite treat twice recently, though: to celebrate winning the French Open and Wimbledon junior titles.

Tsai could not make those trips. She remained in Taipei, selling tanghulu. But when Jason plays, Ed sends her updates. In a recent email, he said his wife told him that Jason’s victories buoyed her spirit, making her stand stronger in the moment.

But the arrangement is no longer tenable with her physical condition. Tsai needs rest to recover, and Ed said this week that in the spring, the family plans to shutter the business. Legally, it cannot be sold, just closed. But now that Jason will be earning some money on tour, the investment in his future may pay off and the financial burden eased.

“I don’t know how far he can go,” Ed Tseng said. “But we are doing everything we can to maximize his talent.”

An earlier version of this article misspelled the name of Chun Hsin Tseng's father. He is Yu Te Tseng, not Yu Tu.