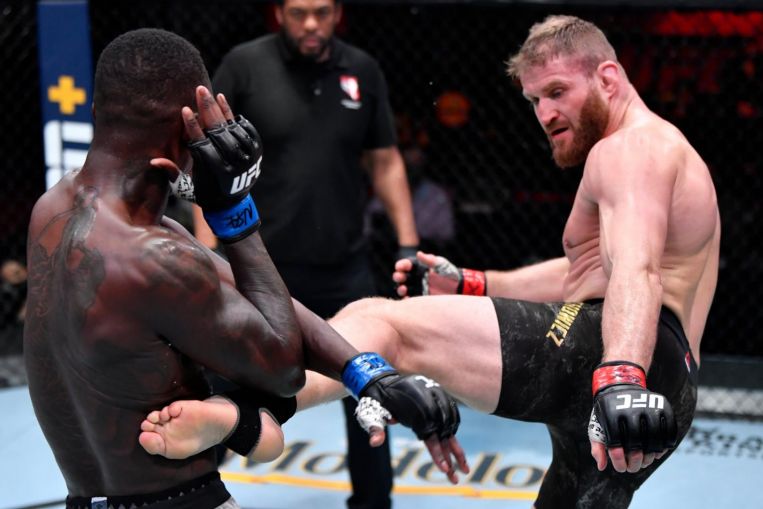 LOS ANGELES (REUTERS) – Jan Blachowicz bounced back from a slow start to outpoint Israel Adesanya and retain his light-heavyweight title after an enthralling tactical battle at UFC 259 in Las Vegas on Saturday (March 6).

In the co-main event, Amanda Nunes blasted Megan Anderson en route to an easy first-round submission win to defend her featherweight title, and Petr Yan lost his bantamweight belt to Aljamain Sterling when he was disqualified for an illegal knee.

Despite holding the belt, Poland’s Blachowicz came into the fight as the underdog, and Adesanya’s slick movement and striking had him in control for much of the first three rounds.

However, Blachowicz turned the tide in the final two frames, taking the previously undefeated Nigerian, who was seeking to add the light-heavyweight belt to his middleweight title, to the mat and controlling him with ease.

“Now I think I deserve some respect. I’m the true champion right now,” a triumphant Blachowicz said after the fight.

In the co-main event, Brazil’s Nunes needed just over two minutes to dismiss her opponent, rocking Anderson early with some powerful right hands before taking the fight to the ground and securing the win with an armbar.

The win was the 12th in a row for the 32-year-old, who also holds the UFC’s bantamweight title, and her ninth straight victory in a title fight, with her last loss coming to Cat Zingano in September 2014.

In the bantamweight title bout, Aljamain Sterling became the first UFC fighter to be crowned champion via disqualification when Yan struck him with an illegal knee to the head in the fourth round.

Ahead on two of the three judges’ scorecards in the five-round fight, Russian Yan appeared to ask his corner before kneeing the downed Sterling. Sterling was unable to continue and Yan was disqualified, losing his title.