Queensland Firebirds coach Roselee Jencke has maintained that optimal team performance justified the decision not to play Super Netball's only Indigenous athlete, Jemma Mi Mi, at all during last week's Indigenous round.

Jencke's comments came during the Firebirds' 65-63 win over Collingwood on Saturday, capping off a dismal one-win season for the young Magpies side.

Mi Mi played a crucial role in the victory over the Magpies and was in tears after the game, registering 22 feeds and 10 goal assists in close to three-quarters of game time. 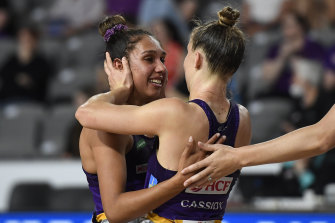 The Firebirds faced more questions about Jemma Mi Mi’s omission from last week’s Indigenous round during their win over the Magpies on Saturday. Credit:Getty Images

The Firebirds were criticised last week for keeping Mi Mi on the bench during the round she helped promote, and responded by issuing a statement on Monday. It read: "The decision not to put Jemma on the court was the right one from a game strategy perspective, however we misread community expectations and the significance of Jemma's court time in the game in this round."

Firebirds coach Roselee Jencke added to that answer in an interview during the clash with the Magpies. Asked whether she would handle last week's game differently in hindsight, Jencke said "possibly".

"That is a really interesting question," Jenecke said during the Channel Nine broadcast. "My position is around winning, that's my job description, and we had a great game against the Vixens, and I put the team on that's going to win.

"Possibly [I would handle it differently] … it's been a really sad week and we all need to do a hell of a lot better."

Jenecke said the team had worked to "get around Mi Mi" during the week and that the player was doing "really good" amid the controversy. In tears post-game, she was in the middle of a group hug while they celebrated.

"This week for all of us has been incredibly emotional. No more so than for Jemma," Simpson said. "I think the strength she's shown across the week and bravery to come out and play like that, we all want to wrap our arms around her. She was incredible."

The Magpies led for most of the game but surrendered the lead in the final term.

That lead changed hands numerous times, but when Shimona Nelson missed her first of 43 shots late in the term, it allowed Queensland to win possession and kick ahead again.

Geva Mentor, as she has often been this season, was best on court for the Magpies in defence.