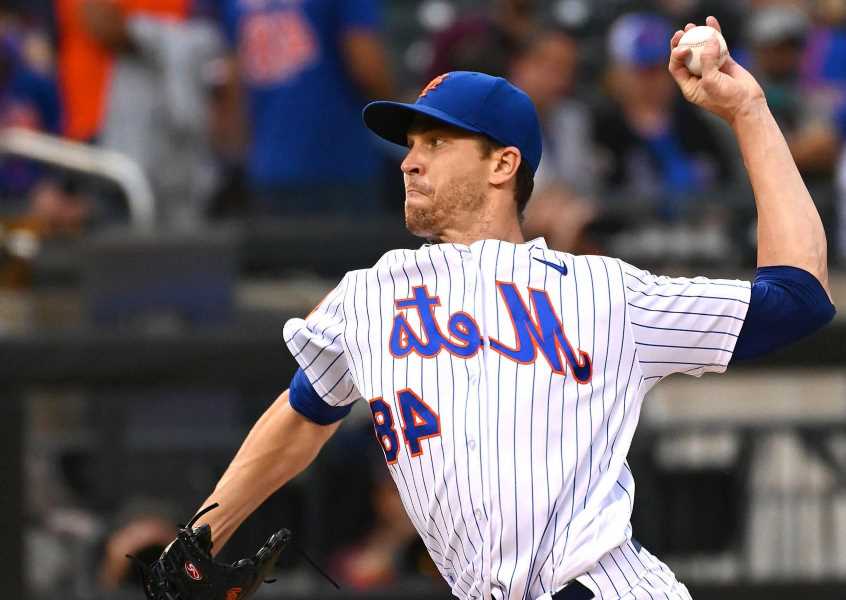 Saquon Barkley taking his ACL rehab 'one day at a time'

Giants have no excuse not to win NFC East

Luis Rojas' role in Mets' success should not be underestimated

That is why it was virtually impossible not to hear a Cy of relief from Mets owner Steve Cohen on down to the fan base that worships deGrom when a precautionary Saturday morning MRI exam confirmed the optimistic diagnosis on the right-hander’s flexor tendinitis.

Because for the Mets, 2021 is about deGrom’s wing, and the prayers of a championship-starved franchise and its fans.

There used to be a time, a more innocent time, a more united time in this country, when a news bulletin would interrupt regular television programming if the president, whomever he was at the time, had a cold.

We were reminded on Friday night, when the euphoric fans returned with a joyous vengeance and filled Citi Field with electricity, that deGrom is the incumbent president of any Mets championship campaign.

We were also reminded that, as much as it doesn’t appear that way, deGrom’s inhuman 0.56 ERA arm is human, just like everyone else’s.

So it was big news when deGrom soft-tossed on Saturday — before Marcus Stroman, victimized only by a Fernando Tatis Jr. home run, deGromed the Padres 4-1 — and remained on track to make his next start.

“It’s something that we want to take day-by-day … we still want to pay close attention to it,” Rojas said.

It would be both negligence and madness not to, especially after deGrom was shut down twice earlier this season with right-side tightness.

“Any elbow injury in a pitcher is concerning,” David J. Chao, known on Twitter as @ProFootballDoc, tweeted on Saturday. “Hopefully the flexor tendonitis is mild with no UCL involvement.”

The magnitude of deGrom’s star shines brightly now in that Queens constellation, which neighbors the Brooklyn constellation where Kevin Durant, Kyrie Irving and James Harden are based.

“We feed off the GOAT, man, for sure,” Stroman said. “He’s truly the best of our generation. I think he’ll be the best to ever do it once it’s all said and done.”

We have seen this kind of adulation around here from time to time … Tom Seaver, aka The Franchise and Tom Terrific … Dwight Golden, aka Dr. K (for a fleeting period) … Matt Harvey, aka The Dark Knight … and to a lesser degree, Noah Syndergaard, aka Thor.

When deGrom (five RBIs, four earned runs allowed) is pitching for them, Mets fans do not fret about sticky foreign substances on the deadened baseball … they are too busy being Metsmerized by the exhilarating sight of exasperated, flailing hitters looking more helpless against this strikeout machine than against anyone else in the game. DeGrom the batter probably couldn’t hit him.

When deGrom is pitching for them, it is an event.

Through my mask on the field on Saturday, I asked a masked Rojas what he remembered his dad, Felipe Alou, telling him about facing the young Seaver.

“He told me a story that he got a single off of him first time he faced him,” Rojas said, “and he was at first, and he was just like looking in the outfield, looking everywhere, and all of a sudden, he caught Seaver’s eyes looking at him from the mound. And my dad told me, ‘Luis, he was looking at me like, ‘You’re lucky you got that one.’ As a youngster. He thought that a kid with that confidence and that stuff, he was just meant to be special.”

What Reggie Jackson was once quoted as saying about Seaver would certainly apply to deGrom: “Blind people come to the park just to listen to him pitch.”

Rojas was asked how deGrom is intimidating for batters.

“You don’t know what he’s thinking, you don’t know what’s going on, he’s not emotional on the mound,” Rojas said. “And then he has all these specialties, right, in the pitch menu. This guy’s throwing triple digits throughout a game, and then his secondary pitches are not too shabby. You put that all in a package, and that sounds pretty intimidating to me.”

You can add killer instinct as well. Even in his two Cy Young seasons, deGrom never imposed his will on a game the way he does now.

“I think he’s mastered the body control of pitching, along with his perfect anatomy to pitch, probably, he’s got the long extremities, he creates easy torque with his delivery. … His arm action is probably the cleanest in baseball,” Rojas said.

The connection between deGrom and Mets fans is something to behold.

“He enjoys the roar,” Rojas said, adding with a chuckle, “as much as he doesn’t probably share it. … I think he feeds off of it, he missed it last year like everyone did, including me. You’re not gonna get an emotional response from him. You’re not gonna get a wave or anything like that, but in the inside he is responding to them and their support.”

The stress deGrom puts on his arm is monitored closely by the Mets. It is part of the reason why he has not thrown more than the 85 pitches he threw in his six innings against the Padres on Friday night.

“We want to have Jake the entire season, right?” Rojas said. Right.