WHEN Pat Smullen tragically passed away this week he left behind a wife and three children.

Frances, Hannah, Paddy and Sarah will have already been so proud of the man they either knew as a husband or a dad. 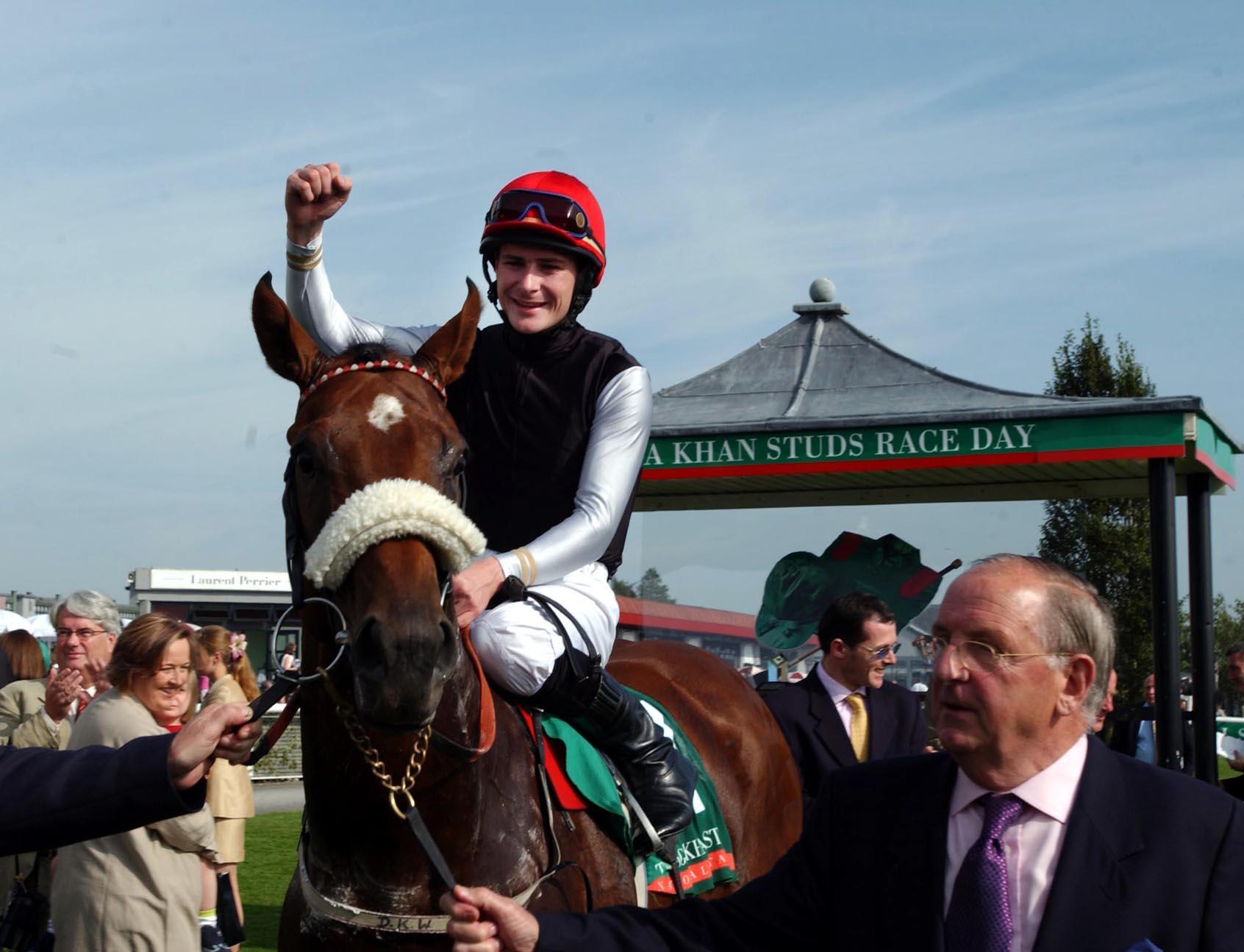 But the outpouring of total love and respect over the last few days from all who knew Ireland’s nine-time champion jockey will, I hope, have also left them in no doubt Pat was not just to them an absolute hero but to all who met him.

That won’t make the mourning any easier. But one day it will bring a smile and comfort to faces currently filled with sadness.

For so many years Smullen was as fit as. But at the age of just forty-three he’s gone, claimed by that most horrid of diseases in cancer that bears no consideration for the kind of person it has taken. Cancer has no mercy. It took my dad many years ago – long before he could ever see me on TV.

But it didn’t suck for Pat. In his life he proved as a rider he was the best of the best. He was also a fine husband. And he had nurtured a fantastic family. Oh no, life had been lived to the full until it was snuffed out in such a cruel manner.

In an interview I did with Pat on Sky Sports Racing where we discussed his cancer treatment, Pat said to me: “There was an element of obsession with the job and the game and the rest of life was passing me by.

“The biggest winner for me from this was that it has brought perspective on life for me and I’m getting to spend plenty of time with the kids.

“That’s a little bit of a silver lining to what has happened. But the best way to put it is that is just bought perspective on life. That there is more to life than a job and in my case my job is horse racing.” Wise words that we can all take heed from.

Many people knew Pat Smullen a lot better than me. But on a professional basis Pat and I would often message each other, and when he asked me to help in any way I could to bolster his cancer charity money raising efforts I was honoured that he even thought of me. 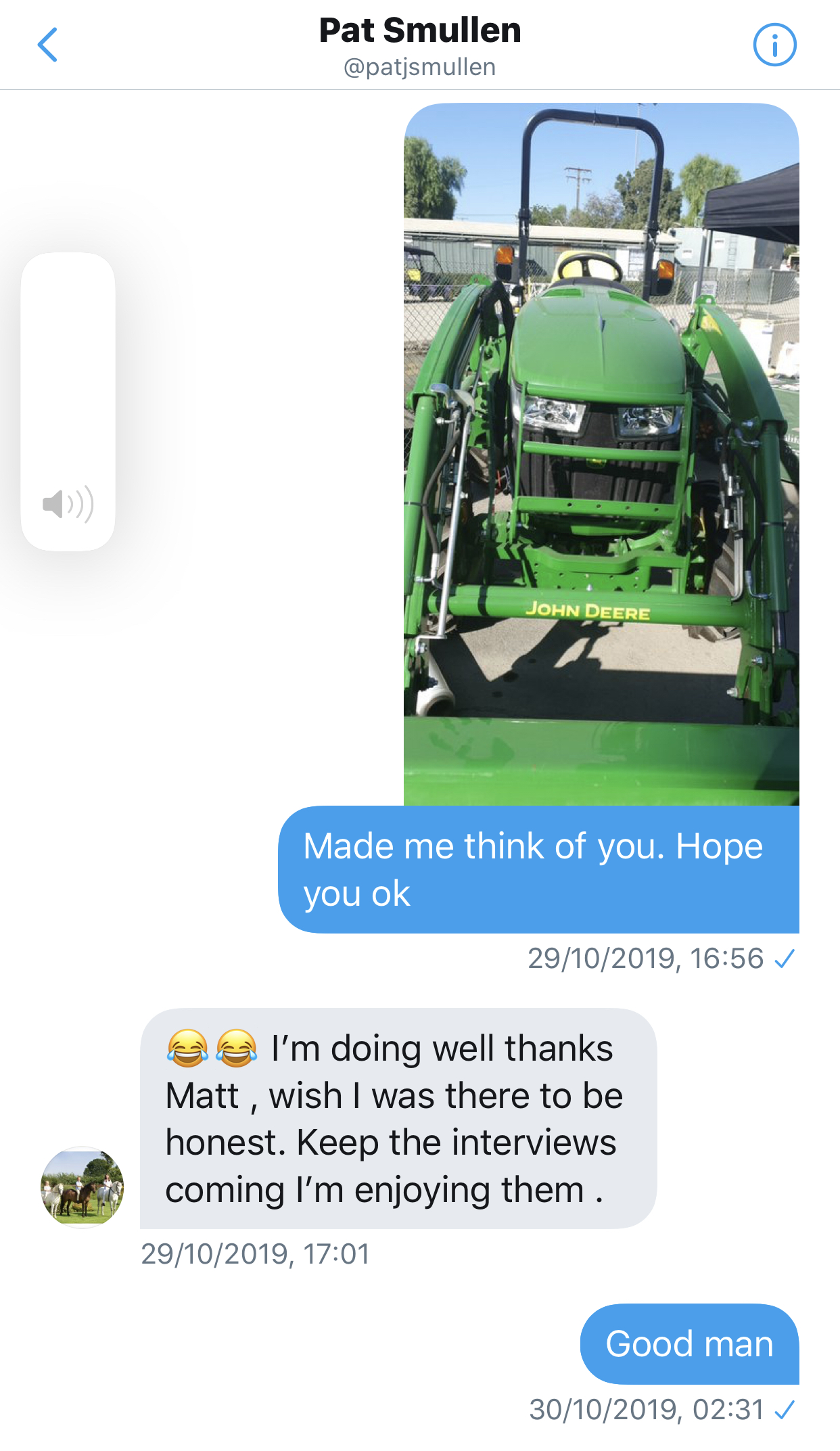 As many of you will know, in the old days of presenting on Attheraces – before it became Sky Sports Racing – we broadcast all the Irish racing.

I was over in Ireland a lot back then, and formed a good relationship with another legend – Pat’s boss of twenty years Dermot Weld.

Now the master of Rosewell and Smullen were a marriage made in heaven. Trips to Galway when they dominated will never be forgotten. Those days when it was not ‘if’ Smullen/Weld had a winner but how many.

Earlier this week Kieren Fallon reminded me of a moment I had with Pat at the Ploughing Championships in Ireland. Horse Racing Ireland had a tent at the event and I was invited over a few times to ‘entertain’ the troops and interview some big names.

Bringing this back to my memory, Fallon said: “I’ve had my quirks. Pat has had his tractors.”

It was at Ploughing that Pat told me of his love for tractors, and how a John Deere machine for him was a work of art.

With that in mind, I would sometimes send a picture of a John Deere to Pat. The last time was at the Breeders’ Cup at Santa Anita last year. You can see our brief chat on this page. You have no idea as a TV presenter how much I will always treasure Pat Smullen saying he enjoyed watching my stuff. From Pat, that meant so much.

Smullen won Classics, his attitude was one of the perfect sportsman and after he was forced to retire he raised money and did all he could to keep others alive.

As human beings we all have to believe we are unique and special. But as someone who is far from perfect, I would look at Smullen and just think: “I wish I could be a fraction of the man you are.” Rest in peace legend.