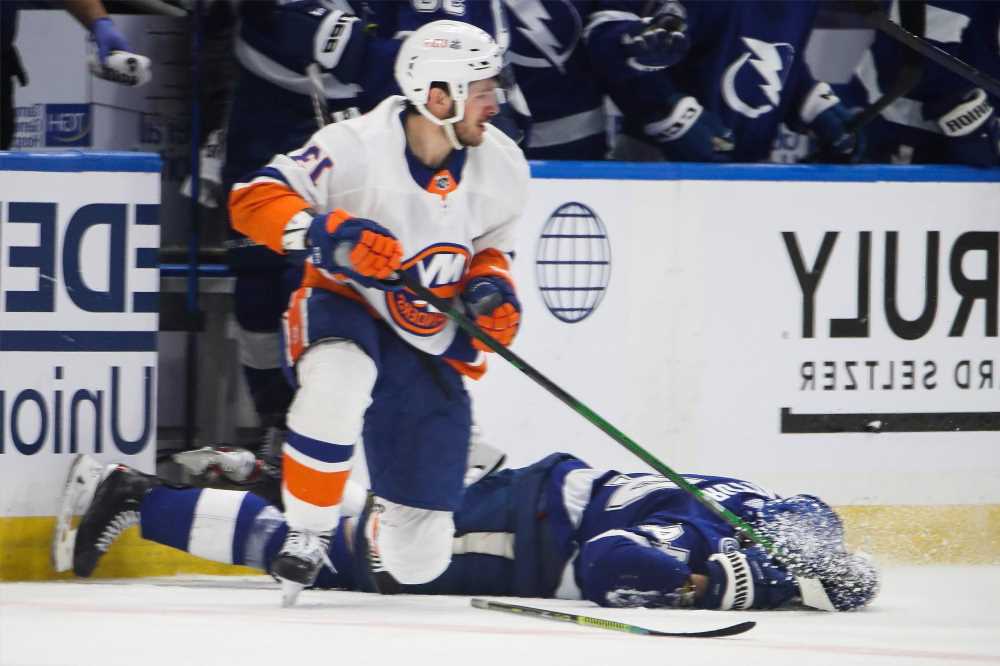 There's never been anything like Ryan Pulock's miraculous Islanders stop

The guys wearing white were unrecognizable. They were wearing the Islanders logo on their chests, but come on, those uniforms must have been purchased at a costume store running a Buy One, Get 20 sale.

For this Monday night in Tampa, the Islanders were imposters, unable to compete in any facet of the game, overrun in all three zones by the Lightning in an 8-0 Game 5 defeat that stands as the most lopsided in franchise playoff history and leaves the club on the brink of extinction going into Wednesday’s Game 6 at the Coliseum.

“It was one of those nights where we couldn’t do anything right,” head coach Barry Trotz said following the fiasco. “If this result doesn’t motivate us, then I’m not sure what will. We’ve just got to man up.”

But it may be even worse than that, difficult as that might be to process. Because though the effects of this drubbing would not necessarily carry over into Wednesday under ordinary circumstances, the Islanders are going to have to wait for a decision from the Department of Player Safety regarding the availability of Mat Barzal for the team’s first potential elimination game of 2021.

And there is not a soul in the world who would want to be at the mercy of the decision-making process of VP George Parros and his band of consultants under any circumstance, let alone while on the precipice of doom.

But that is where the Islanders stand. That is where Barzal brought his team by losing his cool at the second-period buzzer following a giveaway on the power play by getting a major penalty and game misconduct for cross-checking Jan Rutta to the ice with what appeared to be the side of the head after No. 13 first responded to their engagement with a cross-check to the defenseman’s left shoulder.

Barzal was furious and momentarily tried to wrestle his way out of the grasp of linesmen Kiel Murchison, who grabbed him immediately following the incident as players milled about. Rutta stayed down for some time, attended to by the Tampa Bay trainer, as the play was reviewed before standing as a major. The defenseman did not return to the match, but who would be surprised if that was a Jon Cooper ploy to influence the NHL?

The league’s discipline system is not only broken, but arbitrary. It would be a travesty if Barzal is suspended off this type of confrontational play that is commonplace and often draws nothing more than a minor, if not a double minor. Or sometimes even nothing, if you’ve seen what miscreants have gotten away with throughout the tournament. But there is just no way to know for sure.

And even if Barzal is not suspended, there is no defense for the Islanders’ most dynamic player putting himself and his team in such jeopardy by losing his composure as we all ponder the vagaries of the NHL’s justice system.

“I was disappointed because it wasn’t going well and he just sort of dug it a little deeper for the guys,” Trotz said. “The biggest concern you have as a coach when you do something like that is that guys have to block shots and you lose another guy because they are battling through it.

“So yeah, I am disappointed in his decision there.”

Barzal has as little defense for his actions as the Islanders had throughout this humiliation in which they never got in on the forecheck, were beaten on the few battles they were able to create, surrendered a wave of odd-man rushes, had issues on their own breakout and gave the Lightning four power plays in the second period after allowing one apiece in Games 3 and 4.

It was 1-0 after 45 seconds, 3-0 by the end of the first period in which the Islanders surrendered eight high-danger chances after having allowed eight, seven, six and eight, respectively, in Games 1 through 4. It was 6-0 by the end of the second with Ilya Sorokin having relieved Semyon Varlamov after the starter allowed three goals on 16 shots in 15:27. Backtracking to the start of the third period of Game 4, Tampa Bay has outscored the Islanders 10-0.

This was as bad as it gets. Except there is the chance, as irrational as it would be, that it could get worse. Trotz said he was unaware of any communication between the league and the organization regarding supplemental discipline but that proves nothing.

So now the Islanders wait on Parros as they prepare for the biggest game of their 2021 lives.

It’s not what you want.