British media reported that Scholes was cleared to take up the position at the fourth division club last week when the English Football League decided the 44-year-old's 10 per cent stake in fifth-tier Salford City would not represent a conflict of interest. 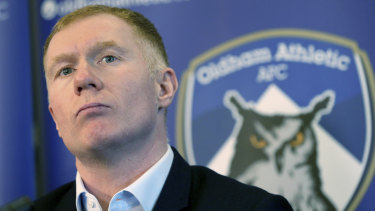 "Paul has won everything there is to win in football," Oldham owner Abdallah Lemsagam said in a statement on Monday (Tuesday AEDT).

"He is a man who will bring a lot of footballing knowledge and his hunger to succeed in management will be there for everyone to see.

"It's no secret how much he has wanted this job in the past and how much he loves this club, so I'm very happy to bring him into our family at Oldham Athletic."

"Although Paul was never operational in Salford City he will resign as a director of the football club, allowing him to focus completely on his new role at Oldham," the National League club said in a statement.

"From the start we have always said that each of the 'Class of 92' would offer different levels of commitment dependant on their individual roles."

The former England international has worked as a television pundit for BT Sport in recent years.

Oldham sacked Frankie Bunn in December and academy coach Pete Wild was put in temporary charge of the team. 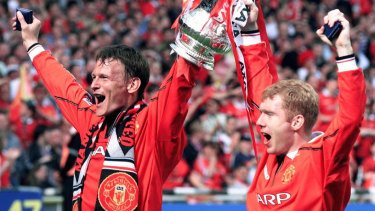 Scholes during his wildly successful playing days at Old Trafford.Credit:AP

A 3-0 victory at Crawley Town on Saturday was Oldham's first in the league since New Year's Day and they are 14th in the table – nine points off the play-off spots.