Wests Tigers coach Michael Maguire has moved to quickly to shoot down speculation Robbie Farah will retire and knows the club legend will play a huge role on the field in 2019.

The Tigers also have the option to ask the NRL for their $639,000 cap penalty to be spread over four years – the duration of Farah's planned ambassadorial role – which would still allow them to go to market for a couple of quality players next year. 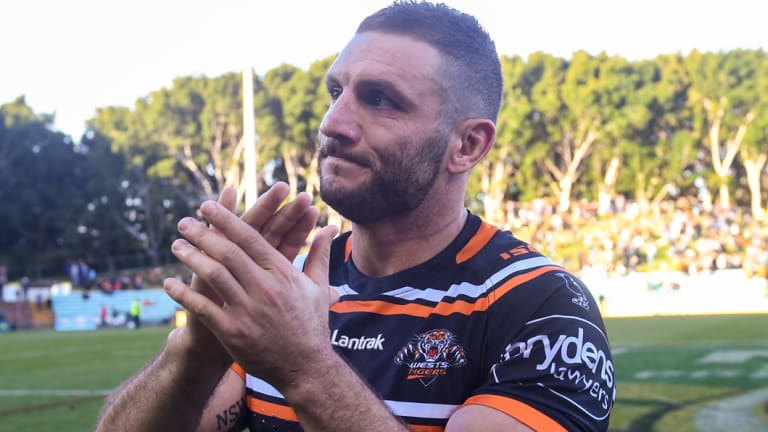 There is no chance any Tigers players will be shed if the current cap penalty remains.

At the very least the club can promote two players from its lower grades.

Ironically, the Tigers are only capable of surviving the latest penalty because their cap is in such good shape with no heavily back-ended deals, which banned chief executive Justin Pascoe worked hard to clean up during the past three years.

Farah was in good spirits as the club trained at Lidcombe Oval on Friday morning, despite expressing his disappointment at being dragged into the club's latest mess.

A day earlier Farah was digesting the club's heavy reprimand for failing to disclose his ambassadorial role, and said: "I am at the point now where I'm thinking about walking away. I don't want to play.''

Maguire has always been a huge fan of the experienced No.9 and expects the Tigers' favourite son to play on.

"I've known Robbie for a long time, and the maturity and leadership he shows now will help take this club forward,'' Maguire told smh.com.au.

"I expect him there in 2019. All his experiences he's had through his career will only assist me growing young men.

"He was at training this morning, did everything and was in really good spirits.''

All clubs must fill their 30-man roster by June 30 with the Tigers keen on signing a couple of outside backs.

The health of the Tigers' cap was one reason Maguire came on board as Ivan Cleary's successor.

"I went through a thorough process before I came to the club, the cap is always a big part and I could see growth in this current team, which was the reason I came on board,'' Maguire said.

The club has now broken up for Christmas and Pascoe remains in exile – no players or officials are allowed to make contact with him as part of his NRL ban.

The Tigers are prepared to fight for their boss who helped the joint venture record a profit for the first time in the club's 20-year history.

Pascoe told smh.com.au earlier this month that the profit was about $300,000, but the club decided to take $200,000 and redirect it to its staff as bonuses.

Many see Pascoe's ban excessive, but the NRL set a precedent when they sacked Joe Kelly for 12 month over his role in Manly's cap saga. Kelly can return in nine months should he satisfy the NRL's criteria.

Some fans were wondering why rival clubs were allowed to sign some of their favourite sons to ambassadorial roles, such as Anthony Minichiello at the Sydney Roosters, yet the Tigers were hit hard for the Farah deal.

Pascoe never declared the deal at the time, but this oversight and the subsequent punishment, including a $750,000 fine, has upset the Tigers.

The NRL made it clear players can move into post-career roles, as long as they were declared and the money paid within reason. For example, a player being paid $700,000 for an ambassadorial role would be seen as blatant abuse of the cap.

Asked about the difference between Farah and Minichiello's arrangements, an NRL spokesman said: "The NRL rules provides mechanisms to allow clubs to retain the services of players after they retire to promote their clubs sand the game.

"But those rules require clubs to declare those deals so they can be assessed by the cap auditor.

"The Roosters declared the Minichiello role with his club and it was approved by the salary cap auditor.''