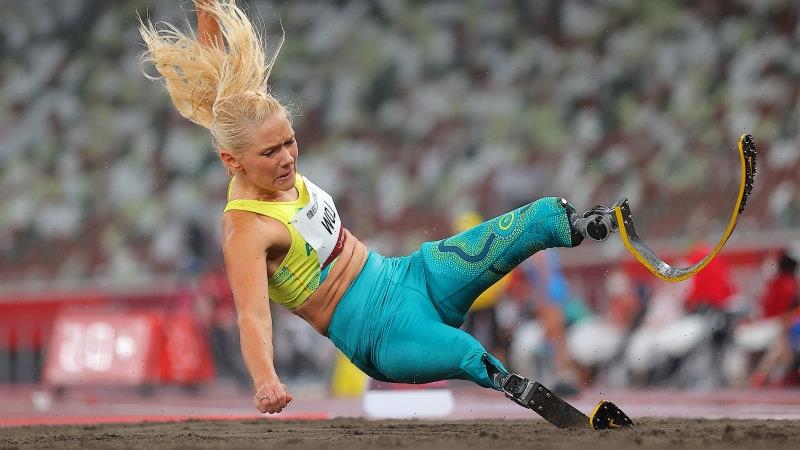 Adopted Australian Vanessa Low broke her world record three times and produced the performance of her life in the women’s T63 long jump to seal a second Paralympics gold medal, this time in front of husband Scott Reardon in the stands.

Reardon deserves a few drinks on the house from athletics fans after convincing Low to switch allegiances from Germany to Australia for the Tokyo Paralympics following appearances for her country of birth in London and Rio. 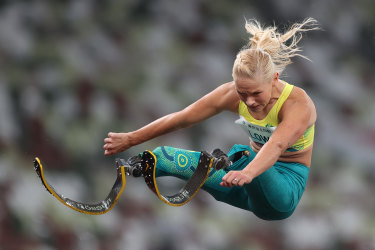 Low won her first Paralympic gold medal for Australia in the long jump after previously competing for Germany. Credit:Getty

Reardon made his move on theGerman track and field star eight years ago at a London athletics meet and the rest is history. The power couple of the Australian athletics team were ecstatic after clinical win.

Low lost both legs as a teenager as a result of a train accident and considered retiring after the 2012 Games but returned to the sport and hasn’t looked back.

The 31-year-old broke her previous best mark of 5.07m with a jump of 5.16m on her second attempt. Italy’s Martina Caironi came close to eclipsing that mark on her fifth attempt with a jump of 5.14m, just two centimetres shy of Low’s best.

On attempt five, Low rose to the occasion and increased her world record to 5.20m. When Caironi failed to improve that distance on her sixth and final attempt, Low knew the gold was hers and had the pleasure of one last victory jump. 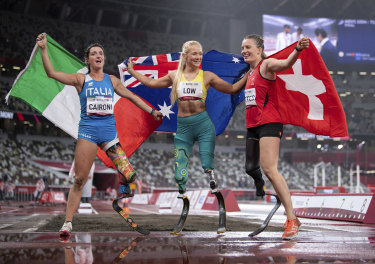 Bounding down the runway, Low hit the board perfectly and parachuted in the air before burying herself into the sand. It was another world record, this time at 5.28m.

“This is a very special one,” Low said. “I know Rio was my first gold but being able to do this experience alongside my husband and being able to do it on the day with Scott by my side, having a familiar face in the crowd, was so special and I am so very grateful for this opportunity.”

Low spoke of her train accident before the Games, saying that she never thought she would be able to make it to the highest level.

“In one moment, everything changed,” Low told the Herald. “Growing up, I was always that confident little girl that had those big dreams and goals. I grew up in a small little town in Germany, so all I wanted to do was travel the world and see the world. I spent five months in hospital and two weeks in a coma while all my friends were having this amazing time and I was fighting for my life.

“One thing I really struggled with initially was belief in myself. I was always that sporty girl … then all of a sudden that became impossible. For me, Paralympic sport enabled me to travel the world after all and really make my dream a reality in a very different framework that I originally imagined.”

The long jump is Low’s only event in Tokyo. She won the T42 long jump event in Rio five years ago and picked up a silver in the 100m final for the same category.

Reardon, who lost a leg in a tractor accident as a teenager, finished fifth in his T63 100m final on Monday.

Australia has now won three athletics gold medals at these Games, following victories to Madison de Rozario in the 800m and James Turner in the 400m.