LOS ANGELES — From 2009 to 2018, the Los Angeles Kings, the Anaheim Ducks and the Chicago Blackhawks combined for 27 playoff appearances, nine trips to Western Conference finals and five Stanley Cups.

With one week left in the N.H.L. regular season, the Kings sit last in the conference with the Ducks directly in front of them, while the Blackhawks find themselves in the Central Division cellar for the second straight season.

“It’s shocking to me, to be honest,” Kings defenseman Drew Doughty said.

Some peaks and valleys can be expected in a league with a hard salary cap and a draft system in which poor-finishing franchises gain immediate access to elite talent. But this season, particularly in the Western Conference, big-market American powers have largely fallen behind smaller market franchises like the Central Division-leading Winnipeg Jets and the Pacific-leading Calgary Flames. The upending of the standings has been accelerated by a youth movement across the sport that has not discriminated based on population or popularity.

“The young guys are taking over the N.H.L., and these teams that are now at the top of their division, they weren’t when we were five years ago,” Doughty said. “It just shows you that you need to keep rebuilding, you need to have good draft picks to try to get some great players.”

The West is striking in its upheaval, with only the San Jose Sharks managing to integrate new players into their veteran nucleus and remain in the playoff picture on a nearly annual basis. The Ducks, the Kings and the Blackhawks have largely been left behind as the game has evolved and have only recently begun to restock prospects. 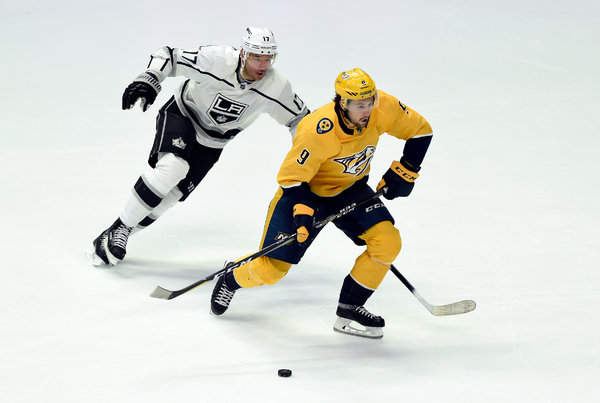 A full-scale changing of the guard has not yet hit the East, where veteran teams like the Lightning, the Capitals and the Penguins are still at or near the top. Still, the Rangers, longtime contenders now in rebuilding mode, will miss the playoffs for the second year in a row, while the Carolina Hurricanes, one of the youngest teams in the league, are closing in on their first playoff berth in 10 years.

“A lot of teams believe that you can turn things around by restarting and getting the right type of pieces,” Rangers goalie Henrik Lundqvist said. “I see it all over the league.”

The Kings’ strategy since winning the Cup in 2014 left them all in on unsuccessful seasons and practically all out of promising prospects. They traded a first-rounder and goalie Martin Jones in 2015 for what turned out to be one season from left wing Milan Lucic. Jones would be traded to San Jose and help lead the Sharks to a Stanley Cup finals berth. The Kings then traded another first-rounder for defenseman Andrej Sekera, who played only 16 games for the team as their cupboard emptied.

“That’s part of the price you pay for winning,” said wing Dustin Brown, who captained the Kings to Stanley Cups in 2012 and 2014. “I think you can ask any player who was part of those championship teams, would they do anything differently? If you said we could go back and do it all over again, the same stuff would happen because two championships, what more can you ask for?”

Last season the Kings squeaked into the playoffs, only to be swept by the expansion Vegas Golden Knights in the first round. Their big off-season move was to sign 35-year-old Ilya Kovalchuk from the Kontinental Hockey League, a move that has been a bust while other core veterans like forward Jeff Carter struggled. Kovalchuk has been a healthy scratch, opting to not even travel with the team of late. Los Angeles made one coaching change already and will almost surely make another at year’s end.

The Ducks also committed heavily to their existing nucleus, including right wing Corey Perry and center Ryan Kesler, and then were stalled by a series of significant injuries.

Coach Randy Carlyle was fired in February after a calamitous stretch that saw the team lose 19 of 21 games. General Manager Bob Murray, 64, stepped behind the bench for the first time in his career to evaluate his players, coaches and even his auxiliary staff for the remainder of the season, after which Anaheim too is all but certain to make another coaching change.

Carlyle coached the Ducks to a Stanley Cup in 2007 and a conference finals appearance in this second stint with the team in 2017. But Anaheim was swept by the Sharks in the first round of the playoffs last season, and Carlyle, known for his demanding old-school approach, appeared to lose the locker room during this turbulent season. The assistant coach Mark Morrison said that under Murray, the environment around the team was more upbeat and egalitarian.

For Chicago, sweeping changes began in 2017 after the top-seeded Blackhawks were swept in the first round by a Predators team that went on to the Stanley Cup finals. Much as they did in 2010 following the first of three Stanley Cups in recent years, the Blackhawks faced a salary cap crunch that led to tough decisions. They jettisoned most of their defensive depth and left wing Artemi Panarin, who is now the leading scorer of the Columbus Blue Jackets, who are in playoff position in the East.

“Your younger players get better, everyone wants raises and it’s tough to keep teams together,” right wing Patrick Kane said. “We’ve seen that a few times with our team where we’ve had to dismantle the team and make some changes.”

This season Chicago fired Joel Quenneville, who has the second-most coaching wins in league history, and promoted Jeremy Colliton from their American Hockey League affiliate in Rockford, Ill.

Colliton, who at 33 is the youngest coach in the N.H.L., said his team had been “making strides” during his tenure. The Blackhawks have gotten breakout performances from the 21-year-old wing Alex DeBrincat, defenseman Erik Gustafsson and the trade acquisition center Dylan Strome, 22. Kane and center Jonathan Toews have continued to play at a high level while pieces have shuffled around them.

Yet in the N.H.L., hope springs eternal. The same parity that once elevated teams like Los Angeles, Chicago and Pittsburgh from obscurity to prominence is more prevalent than ever.

With most of the regular season complete, seven of the 16 playoff berths remain up for grabs. Teams like St Louis and Carolina have vaulted from the margins of the league into playoff positions. If the season ended Friday, there would be five new playoff teams that did not qualify last season.

“It’s a fine line: You can end up dead last in your division one year and at the top next year, and vice versa,” Toews said. “If you can limit those lulls where you have losing streaks that really hurt you in the standings, then anything can happen.”