Liverpool moved six points clear at the top of the English Premier League after strolling past visiting Newcastle, 4-0, at Anfield on Wednesday.

Defending champion Manchester City, which started the day in second place, surrendered that position to Tottenham when it fell at Leicester, 2-1 — City’s second surprise loss in four days when it was beaten at Leicester 2-1.

Tottenham followed up its 6-2 romp at Everton on Sunday with another big win as Son Heung-min scored twice in a 5-0 thrashing of Bournemouth that took the London club one point ahead of Manchester City in the standings.

At Leicester, Liverpool showed just how desperate it is to secure the club’s first top-flight title since 1990. Struggling Newcastle last won in the league at Anfield in 1994, and the former Liverpool manager Rafael Benitez’s decision to rest his leading scorer, Salomon Rondon, did not say much for its ambitions Wednesday.

The floodgates opened in the 11th minute when the combination of a poor Jamaal Lascelles header and a striker’s finish from defender Dejan Lovren produced the opening goal.

Three minutes after the halftime break, Paul Dummett hauled down Mohamed Salah in the penalty area and Salah, Liverpool’s top scorer, bagged his sixth goal in five matches by converting the penalty. 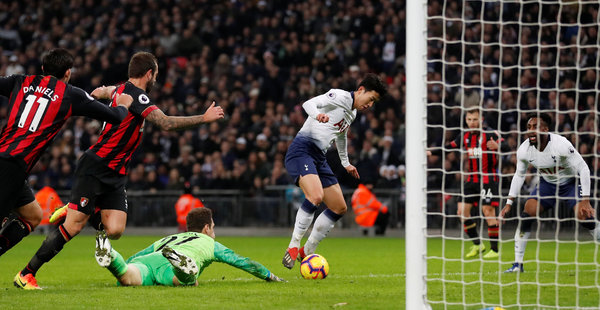 Xherdan Shaqiri pounced on a Trent Alexander-Arnold cross to make it 3-0 with 11 minutes remaining, and then the substitute Fabinho bundled home a corner as the home team kept its 12th clean sheet of the campaign, the same number it achieved when it last won the title.

At Leicester, Manchester City tumbled into third place, seven points behind Liverpool and one behind Tottenham, and lost defender Fabian Delph to a straight red card in its 2-1 defeat.

Sergio Agüero and Kevin de Bruyne were back in the starting lineup, and City took control after 14 minutes. Aymeric Laporte stepped out of the defense and laid a pass into the feet of Agüero, who helped the ball on to the unmarked Bernardo Silva to score.

But five minutes later, Leicester striker Jamie Vardy raced down the left and his cross was headed in at the far post by Marc Albrighton. Roberto Pereira dealt a seismic blow to City’s title challenge with nine minutes remaining when he latched on to Leroy Sané’s attempted clearance to fire a right-foot shot beyond goalkeeper Ederson.

City defender Fabian Delph was then sent off for a straight red card after catching Pereira with his studs after having taken a swipe at the ball.

It is the first time City has lost two straight league matches since December 2016.

In London, meanwhile, surging Tottenham reeled off an eighth victory in nine Premier League games by routing Bournemouth, 5-0, at Wembley. Two goals by Son Heung-min and one apiece from Christian Eriksen, Lucas Moura and Harry Kane took Spurs, which mauled Everton by 6-2 on Saturday, up to second place in the standings.