Ronaldo previously held the record for the most-liked sports photo in the social media app's history. 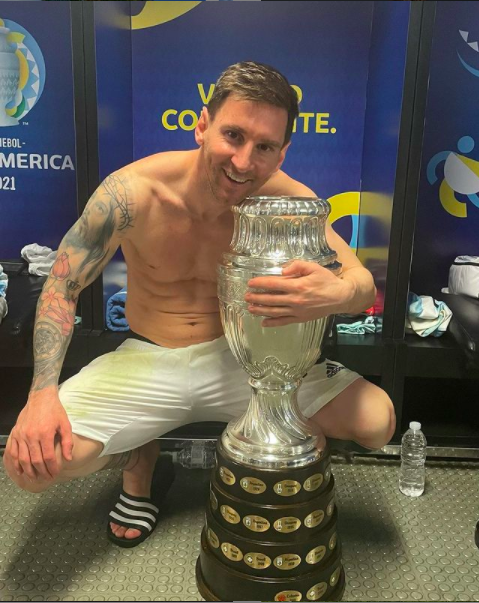 The Juventus forward, 36, has more than 19.8 million likes for his post paying homage to the late Diego Maradona in November 2020.

But after Messi, 34, helped Argentina win the Copa America by beating Brazil 1-0 in the final, his post-match snap became record-breaking.

He captioned the post: "What a beautiful madness! This is unbelievable! Thank you, God! We are the champions."

Messi, who won his first international trophy, is currently holidaying in Miami with his wife as he looks to finally sign a new Barcelona contract.

It comes only a year after he handed in a shock transfer request in a bid to leave the club.

But now under new president Joan Laporta, the iconic Argentine is close to committing his future to the Nou Camp.

Local reports in the Catalan capital say he has agreed to take a 50 per cent pay cut but will be offered a five-year deal instead of the two years initially talked about.

A lower salary for Messi is key to keeping him at the Nou Camp because of the club's financial disarray.

Sergio Aguero, 33, Eric Garcia, 20, and Memphis Depay, 27, have all signed for the LaLiga giants on free transfers this summer.

Antoine Griezmann, 30, could end up returning to old side Atletico Madrid as part of a swap deal with Saul Niguez, 26, to help with the operation to keep Messi at Barcelona.

Samuel Umtiti, 27, Miralem Pjanic, 31, Ousmane Dembele, 24, and Philippe Coutinho, 29, are also all believed to be available for transfer.