LOS ANGELES — The Los Angeles Lakers described last weekend’s N.B.A. All-Star break as an opportunity for a much-needed reset, with the hope that they could ultimately make a playoff push after spending a few days apart. None of it sounded very convincing.

But when the team reconvened for practice on Wednesday morning, LeBron James said his level of intensity had been “activated,” as if he were a superhero who had flipped a switch. He does not usually activate himself this early in the season, he said, but the Lakers need all of him now — in large part because they had lost so much ground when he was sidelined for about a month with a groin injury.

“We would have loved to have had success when I was out, but we didn’t, so this is where we are right now,” James said.

And when asked how he would elevate the play of his younger teammates, he put it simply: “We don’t have a choice.”

In other words, it was sink or swim for the Lakers before their game against the Houston Rockets on Thursday night, and there would be no lifeguard.

The question now is whether the Lakers, who at 29-29 are the very definition of average, can build off it. Consistency has not been their hallmark.

“It can give us some momentum that we need,” Coach Luke Walton said, “or it can do nothing. It depends how we respond to this.”

Not so long ago, the Lakers had a similarly galvanizing win — or so it seemed.

It was Feb. 7, and before the league’s trade deadline Magic Johnson, the team’s president of basketball operations, had failed in his quest to ship nearly half of the roster to the New Orleans Pelicans in exchange for the All-Star center Anthony Davis. It was a huge soap opera, and the Lakers responded in surprising fashion: by going out that night and defeating the Boston Celtics — on the road, no less. 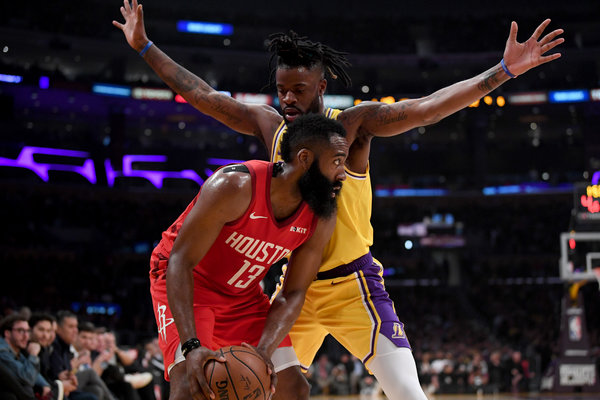 The win, though, was fool’s gold. The Lakers got pulverized by the Philadelphia 76ers three days later, then hobbled into the All-Star break with a loss to the Atlanta Hawks — a performance so devoid of energy that it seemed to signal a dysfunctional locker room, and maybe even one that was beyond repair.

Walton encouraged his players to reflect and refocus over the break. For James, that meant returning to Los Angeles in playoff mode — much earlier than he would prefer.

But this is unfamiliar territory for James, a three-time champion who has made 13 straight trips to the playoffs and eight straight appearances in the N.B.A. finals. Now, with an inexperienced batch of teammates on the Lakers, he is merely fighting to lead them into the postseason.

Then he must have loved what happened against the Rockets (33-25), who built a gaping lead in the third quarter behind James Harden. But the Lakers dominated the fourth quarter by limiting the Rockets to 36.8 percent shooting and forcing six turnovers. James finished with 29 points, 11 rebounds and 6 assists.

“He’s had more of a serious focus on his face, about him, the last two days, even in the practice facility,” Walton said, adding: “I think he recognizes where we’re at and the sense of urgency we need to play with.”

The Lakers also benefited from the fresh presence of Reggie Bullock, a versatile wing whom they acquired from the Detroit Pistons at the trade deadline. Bullock scored 14 points and defended the Rockets’ James Harden for long stretches. For a team that lacks much experience, Bullock could make a difference moving forward.

“He’s a vet,” James said. “It’s great to have a shooter of his caliber, of his size; his competitive nature out on the floor. He was big for us.”

The Lakers left Staples Center two and a half games behind the Los Angeles Clippers for the final playoff spot in the West. But James expressed supreme confidence as the team prepared to visit the Pelicans on Saturday.

“I like where I’m at,” he said. “I will love where I’m at in the next few games, and I believe — continue to get better and better.”

As for his teammates — well, that is up to them.