Sports stars can sometimes speak about having two distinct careers – a change of tack or a new approach sparked by even an innocuous event. Perhaps it stemmed from a rev-up from a coach or a confidant. Sometimes an athlete can just turn a new leaf.

Then there’s what happened to Czech star and two-time Wimbledon champion Petra Kvitova. 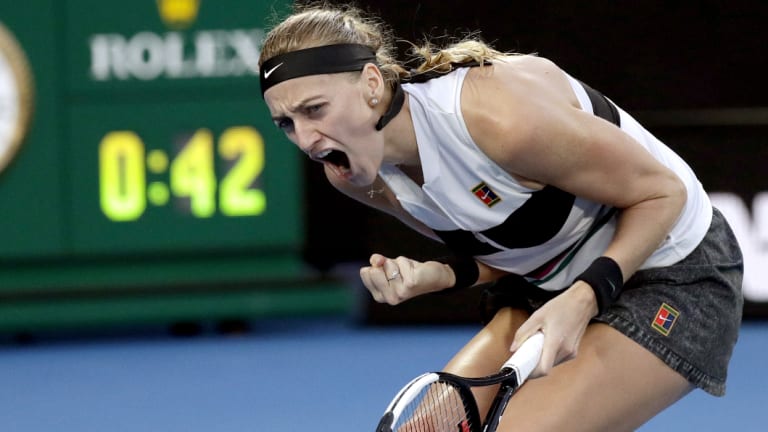 Petra Kvitova’s emotional ride back to the top takes another step on Tuesday.Credit:AP

The current world No. 6 suffered stab wounds during a home invasion in late 2016, injuries that required surgery to repair severe tendon and nerve damage to her left hand.

After spending five months on the sidelines in 2017 recovering from the physical and mental scars – including missing the 2017 Australian Open – Kvitova is now well and truly playing out her “second career”.

A US Open quarter-finals berth came 18 months ago but now the 28-year-old is once again deep into a major and in contention for the Australian title.

“So it's the first semi-final of the second career. But, yeah, it's took me while, for sure,” Kvitova says.

“I never really played so well on the grand slams [after 2016], so I'm happy this time it's different.

On Tuesday night Kvitova was the Barty-pooper as she stopped Australian Ashleigh's charmed run to the quarter-finals. But now Kvitova will be everyone's sentimental pick to add the Daphne Akhurst Trophy to her two Wimbledon crowns.

Waiting in the semi-finals in Melbourne is an unexpected match against unseeded and unheralded American Danielle Collins, ranked 35th.

For Kvitova, the tears started to roll when the question alluding to her injuries came after her demolition of Barty. But, as she later pointed out, they were “happy tears”.

“Yeah, I thought that question will come,” Kvitova said.

“Actually, it was kind of a mix of emotions of everything I've been through. You know, sometimes I'm not really recognising anything from the past. But when Jim [Courier] asked that, it wasn't really easy for me to kind of see myself being in a semi-final after everything.

“I always wanted to come back and play on the highest level I can, compete with the best, play the grand slams, actually be very deep in the grand slam, which is happening.

“Yeah, it just took me a bit to the tears, but it was happy tears, for sure.” 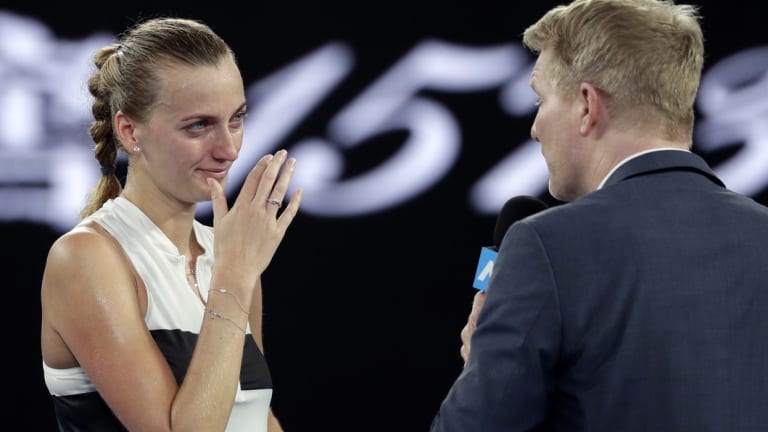 Tears flow after the game for Kvitova.Credit:AP

Kvitova’s semi-final opponent Collins is enjoying her time in the sun. As America's fourth-ranked woman behind Sloane Stephens, Serena Williams and Madison Keys, she has a degree of anonymity.

When assessing unlikely semi-finalists, her story compares favourably with Greek Stefanos Tsitsipis, the bolt from the (white and) blue in the men’s draw.

Collins, 25, came to Melbourne having lost all five of her previous matches at any of the majors. But with five impressive wins at the Open just to get to this point, she can take a no-fear approach against her seasoned opponent.

However, she doesn't necessarily see it that way, saying she's simply getting a “different outcome”.

“I lost to some really good players and I did everything I could those days.

“I’ve gained more experience in the last year, which is great.

“But I don’t think much has really changed. I’m just getting a little bit different outcome.”

The only time the pair has previously clashed was earlier this month at the Brisbane International, when Kvitova won in three tight sets.