Peter Handscomb was involved in a controversial dismissal of Virat Kohli on a day the animated Indian captain was accused of being "out of control".

In a tense and absorbing third day of the second Test, Kohli's 25th Test ton, and seventh against Australia, was rated as one of his finest by Indian legend Sachin Tendulkar but he found himself at the centre of a contentious catch by Handscomb when on 123 shortly before lunch on day three of the second Test in Perth.

In front of 19,757 fans, his dismissal sparked a collapse of 5-32 by the tourists, gifting Australia a 43-run first-innings lead.

Determined to inspire his team in the field, Kohli then had plenty to say to the Australian batsmen, when they entered and left the field in the final session. He appeared to direct words and a tummy rub at Shaun Marsh, had a crack at Travis Head, clashed with Tim Paine and whipped the local Indian fans into a lather.

This prompted former Australian batsman Mike Hussey, typically cautious in his comments, to launch at Kohli.

"Virat Kohli is out of control out there. He is revving up the crowd and he is going nuts when they take a wicket. I don't like his attitude at the moment," Hussey said on Macquarie Sports Radio. 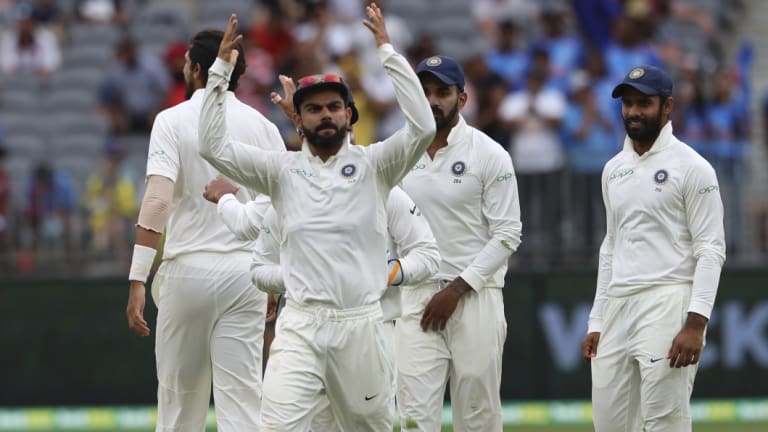 Revved up: Captain Virat Kohli exhorts the crowd to cheer after India claimed the wicket of Australia’s Peter Handscomb on day three of the second Test in Perth.Credit:AP

Langer was less than impressed with Kohli on Sunday, and made his feelings clear post play.

There was drama when Pat Cummins induced an edge from Kohli which was given out by umpire Kumar Dharmasena but was then reviewed with debate over whether a diving Handscomb, with his fingers apart, had correctly cupped the ball or whether it had been taken on the half volley.

As the "soft signal" by Dharmasena was out, third umpire Nigel Llong needed conclusive evidence to over-turn it, which was not forthcoming despite one replay frame sparking debate. 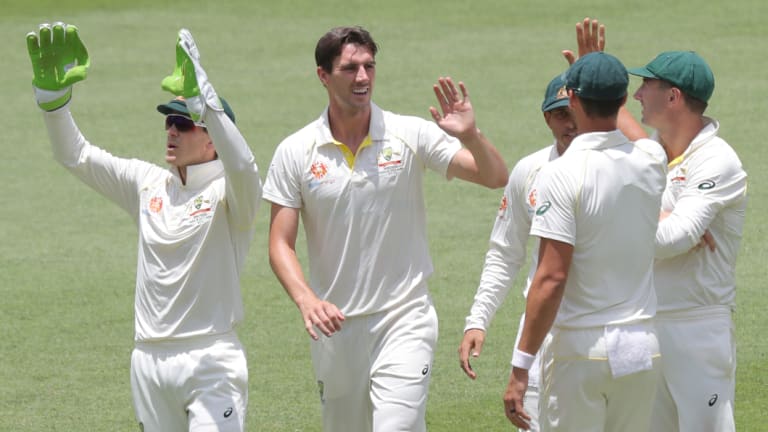 Former Australian captain Ricky Ponting, while commentating on Channel Seven, was adamant Kohli was out.

"I've got no doubt at all that's actually hit his fingers on the full. That hasn't bounced before him," he said.

Spinner Nathan Lyon said the home side had no doubt the catch was clean. 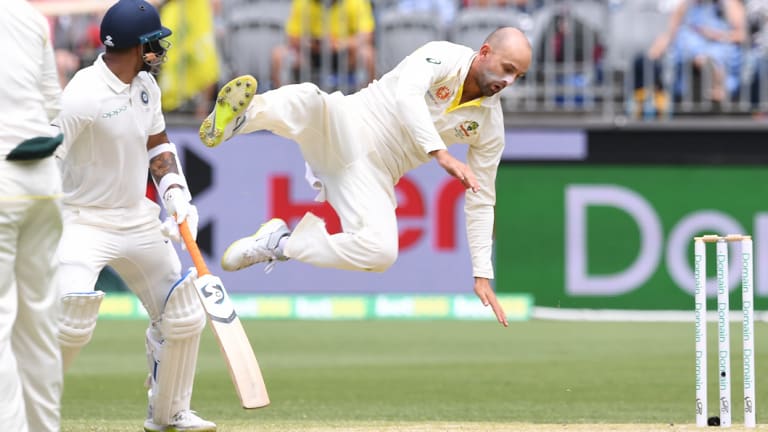 Up there: Nathan Lyon goes flying in a bid to reach a catching opportunity.Credit:AAP

Former Indian batsman Aakash Chopra said there was not enough evidence to over-turn the call but questioned why there had been an initial "soft signal" by the umpire. His comments were echoed by Indian quick Jasprit Bumrah.

"We were a little surprised by the on-field call but now that it's been done, it's been done – we will move forward with the game," he said.

Kohli, having dragged his nation into a position of power, stood his ground and immediately questioned the dismissal. He did not acknowledge the applause for his innings as he left the field, suggesting he felt he should not have been out.

Kohli's dismissal came after the Australians had learnt from their mistakes when bowling to him on Saturday. Cummins' breakthrough was as a result of a strategy where Kohli was pushed back repeatedly on back-of-a-length deliveries and then tempted into a drive from a wide and full ball, which found a thick edge to Handscomb.

Despite being the world's best batsman, Kohli, resuming on 82, emerged with a point to prove, having been criticised by Indian great Sunil Gavaskar for his tactics in the field during Australia's first innings.

Upon reaching his century, he dropped his helmet to the ground, tapped his bat with his fingers and offered a talking motion with his glove, suggesting he had allowed his bat to do the talking.

Australian bowling coach David Saker said the home team had bowled too straight to Kohli early in his innings.

"We probably bowled quite well up front with the newer ball but when Virat came in, we probably attacked him too straight which probably was not our plan. Then he got away," he said.

Former Australian spearhead Mitchell Johnson said Mitchell Starc, Josh Hazlewood and Cummins had been too straight and full and had needed to keep a knee-roll height to Kohli to entice him in to driving outside off stump.

His breakthrough century, his first against Australia since 2015, meant he sits behind only Donald Bradman in terms of having more centuries than half centuries from a minimum of 30 scores of 50 or more.

Kohli's knock was full of crisp drives and clips through mid-wicket off the pacemen and Lyon, and in doing so also became the second-fastest man to 25 Test centuries in terms of innings (127), behind only Bradman (68). He joined his boyhood hero Tendulkar for most centuries by an Indian in Australia with six but needed only 10 Tests to do so compared to the Little Master's 20.

This prompted Tendulkar to declare on social media: "Well played @imVkohli. One of your finest innings. This knock will be remembered for a long time."