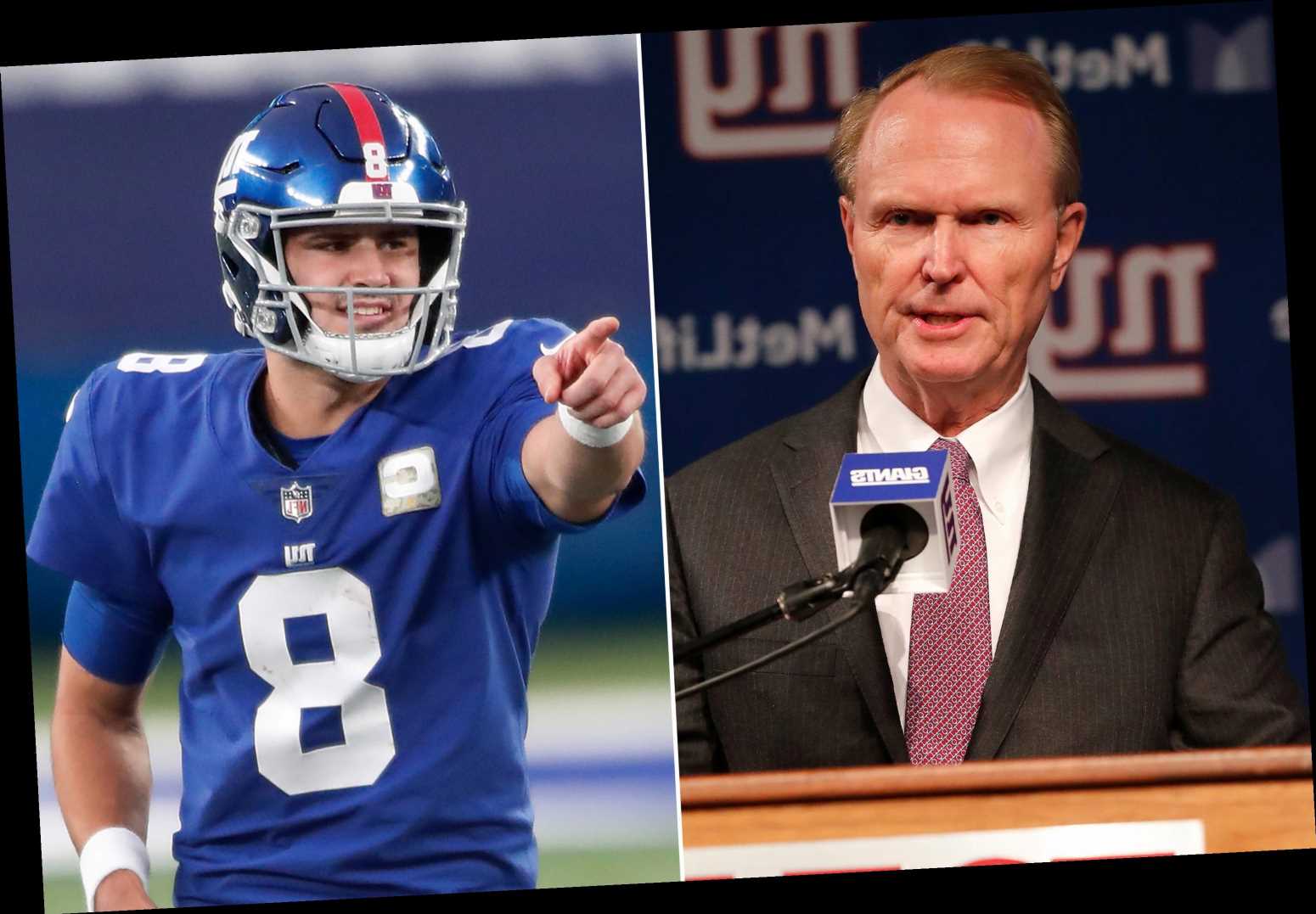 John Mara thinks, talks, and acts like your average fan more than any owner I have covered over 35 years, and that is meant as a compliment. He is not rich by way of the markets, real estate or the oil biz. In fact, New York’s wealthiest owner at a reported $14.6 billion, hedge-fund baron Steve Cohen, is worth about 29 John Maras.

The football business is the Mara business. This truth helps make the Giants co-owner as relatable as a sports overlord can be, and as willing to say things an upper-decker in a frayed LT jersey would say after a ton of free-agent cash is spent in March, when NFC East hope springs eternal.

How good is this roster now? “I think our roster is good enough to make the playoffs,” Mara told The Post.

Do you believe Daniel Jones looks like a quarterback who will ultimately win a Super Bowl? “Yes he does,” Mara responded. “I can say that without any hesitation.”

Good enough to win multiple Super Bowls like his predecessor, Eli Manning? “I don’t see why not,” the Giants CEO said, “if we put the right pieces around him.”

Mara and business partner Steve Tisch just spent a guaranteed $120 million on pieces, including a free agent hired to help Jones, Kenny Golladay, and a free agent hired to stop the opposing quarterback from outplaying Jones, Adoree’ Jackson. Injuries limited the receiver and cornerback to a combined eight games last year, yet the Giants promised them a combined $66.5 million anyway.

To a seasoned scout, that investment might be an overreach by a franchise desperate to claim its first playoff victory in 10 years. To Mara, well, that seasoned scout might have a point. As the Son of Wellington, John lived through that run of 17 straight non-playoff seasons from 1964 through 1980, inspiring fans to burn tickets and to send a plane flying over Giants Stadium with a banner demanding an end to their hell-on-earth experience. At 66, John admits that the Giants’ current drought reminds him of those frightening Dark Ages.

“It’s not all that different, to be honest with you,” he said. “I’ve said things in the past like, ‘I’ll make sure that doesn’t happen again,’ yet here we are — four losing seasons in a row, we haven’t won a playoff game since Super Bowl XLVI. Yeah, that is a fear of mine. Maybe that’s another reason we committed so much money this offseason. We need to turn this team around.”

Yes they do, for the sake of anyone who wants the Giants to really matter again. So here comes the good news: When Mara asked Bill Belichick for a scouting report on New England assistant Joe Judge last year, a Patriots source said Belichick told Mara, “He’s better than the last two guys you hired.” (Mara declined comment on the source’s claim.)

Belichick appears to have been right, again. Judge still has a lot to prove off his 6-10 debut, yet like his former Patriots colleague, Dolphins head coach Brian Flores, he at least has the look of a formidable tough-guy leader. The Giants have a favorable history with tough guys (Bill Parcells and Tom Coughlin), and a not-so-favorable history with not-so-tough guys (Pat Shurmur and Ben McAdoo).

“You always know where Joe is on the practice field, just like you did with Bill and Tom,” Mara said. “His attention to detail is very impressive to me, and those are characteristics Tom and Bill had as well. … He’s made believers out of the players, as far as his program is concerned, in what he’s trying to teach them and the culture he’s trying to build. I’ve been around a number of situations in my years where I didn’t have that sense that the players believed in the head coach, but Steve [Tisch] and I do feel that way now.”

Judge grew up outside of Philly and worked in Starville, Miss., Tuscaloosa, Ala., and Foxborough, Mass., and yet Giants officials think he already has such a good feel for New York, he could pass for a Catholic school kid from The Bronx. So Mara believes he has a winning head coach. He also believes he has a winning quarterback, even though Jones, third-year man from Duke, owns a career college/pro record of 25-37. Jones has the arm, athleticism, and talent — he just hasn’t shown the talent for winning games.

Mara thinks that’s coming in the fall, with the aid of Golladay and a healthy Saquon Barkley. He’s thought it would eventually come ever since that Thanksgiving night during Jones’s rookie year, when the quarterback finished dinner at backup Alex Tanney’s place and headed back to the facility to watch tape by himself.

“Every single one of our coaches loves the kid, and believes he has the talent to win a championship,” Mara said. “He really wants to be great, you can see that. … I believe the sky’s the limit with him.”

At 23, despite last season’s step backward, Jones has the benefit of upside. The man who drafted him, Dave Gettleman, does not. He is a 70-year-old football lifer with a 15-33 record as Giants GM, and Mara decided to stick with him despite all those fans who wished he hadn’t. Why?

“We made some miscalculations, to put it mildly, back in 2018, and to a certain extent we’re still paying the price for some of those errors,” Mara said. “But our personnel decisions improved a bit in 2019, and then significantly last year. I think the combination of Joe and Dave works. They don’t agree 100 percent of the time, but what’s impressed me so far is that neither one is engaged in any kind of power struggle. When it comes to a decision, it’s a Giants decision at the end of the day, not a Dave Gettleman or Joe Judge decision.”

In other words, Joe saved Dave. Judge can save the GM again by going 9-7 and sneaking into the playoffs and making the Giants the Giants again. They seem to be trending in that direction at a time when their division is an ungodly mess.

Mara has credible reasons to be optimistic, even if he knows the big guarantees he’s paying don’t guarantee that the Giants will avoid a sixth season of double-figure losses in their last seven years. He was willing to talk to The Post about a number of issues framing his optimism, including…

The signing of Golladay: “I talked to him on the phone. I was trying to recruit him as well. We’d done a lot of homework on him, but I can’t say he was our primary target going into free agency. There was a big benefit to having him in the building. We put him through a number of different sessions with a number of different people, and our staff was unanimous to sign him. … There was not one person who said, ‘No, we shouldn’t do this.’… He did win people over.”

The reaction to the Giants’ free-agent spending: “So far it’s been very positive, surprisingly so given our record over the last few years. … But the reaction was very positive back in 2016, when we spent a ton of money on a number of free agents. It worked well for one year, not so well after that. I think I’m more comfortable this time around with the individuals we are bringing in. … I don’t like the notion of being the kings of March. If you’re always spending that kind of money in free agency, it usually means you’re not drafting very well. The last couple of drafts have been pretty solid, and hopefully we’ll have another one.”

The Giants’ needs in the draft: “I think adding Golladay and Jackson puts us in a position where we don’t have to draft a receiver or a corner at No. 11. I think we’re in position to take the best player. It doesn’t matter what position that is.”

The potential of his playoff-worthy roster: “I’d be very disappointed if things don’t turn around quickly. … I’m starting to get impatient. It’s been a while. I’m tired of explaining to fans at the end of every season, ‘Things are getting better. We’re on the right track.’ You lose credibility with them. … I’m not saying we have to [make the playoffs] this year. I never want to be in that business. I don’t think we’re a finished product by any stretch of the imagination. We need to add more pieces. But looking at the players we have added, there’s reason to think we’ll be in the playoffs sooner rather than later.”

If they don’t make it sooner, as in next January, Mara will have a hard time coping. He’s attended more than five dozen Giants training camps, back to their time at Bear Mountain in 1959. He lives and dies with his team. When the co-owner tells fans, “As bad as you feel, I feel much worse,” he means it. He also occasionally shows it, after a Giants turnover or dropped pass, by pounding his fist into a press box table. So Mara just spent a lot of money to try to make that pain go away.

“They can’t call us cheap anymore,” he said through a laugh. “They can call us dumb, but not cheap.”

The paying customers can also call the owner one of their own. John Mara acts like a fan. With the Giants trying hard to matter again, it was good to hear him talk like one too.