As Nets guard Joe Harris walks the cobblestone streets outside the team’s practice facility in Sunset Park, no one seems to notice.

“Most of the time, I blend in,” he said. “I kind of look like I work in a Brooklyn coffee shop.”

Harris’s journey from unemployed castoff to indispensable starter mirrors the rise of the Nets, a team reconstructed through savvy draft picks and second-chance signings. Without a marquee star, the Nets have won six games in a row, 19 of their last 24, and are on a six-game winning streak against opponents in the stronger Western Conference.

The Nets had 28 wins last season; now they have the sixth-best record in the Eastern Conference (27-23), and playoff talk is brewing. The injury-riddled team has weathered the loss of Caris LeVert, out with a foot injury since November, and now is without Spencer Dinwiddie, a strong candidate for the Sixth Man of the Year award, who may be out until mid-March with a thumb injury. In Dinwiddie’s absence, the next-man-up Nets will look to G League call-ups and increased scoring from everyone.

“I almost look at Joe as one of the poster boys for the Brooklyn Nets,” the veteran DeMarre Carroll said. “He came in, wasn’t really guaranteed his first year, got on the team, worked his butt off. Each year, he’s gotten better; his numbers, his play, his confidence proves it.” 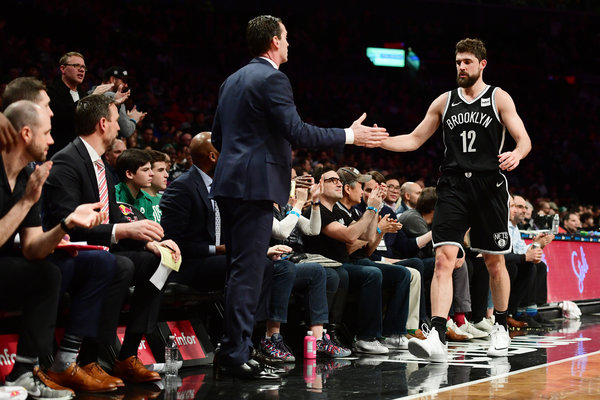 Three years ago, Harris, then with the Cleveland Cavaliers, had the worst day of his basketball life. In a period of a few hours, he had foot surgery, was traded to Orlando, and then was immediately waived. He was out of the league for six months before the Nets signed him to a minimum contract for less than $1 million in 2016. Last summer, he signed a two-year, $16 million contract to remain with the Nets.

“His story is about opportunity and development on a team starting to improve,” Coach Kenny Atkinson said. “Given where he came from, it’s a romantic story, a beautiful story. Everything about him — his humility, the fact that he rides the subway everywhere — is why everybody loves Joe.”

Harris’s romance with the game began in Chelan, Wash., where his father coached high school basketball. In fourth grade, Harris came home one afternoon and asked his mother if he could write his basketball goals on his bedroom walls. She assumed he would scribble them on paper and tape them up. Instead, he took a marker and wrote directly on the walls and ceiling. The writings remain in his childhood bedroom, frozen in the amber of a 9-year-old’s penmanship.

Given that Chelan is a small town with only two gyms, the worst time of the year was when the courts were being refinished, leaving Harris nowhere to play. One time after an interminable wait, the 10-year-old Harris ran onto the court, slid on his stomach and kissed the floor. “Baby, I’m back!” he screamed.

“That pretty much sums me up as a kid,” Harris said. “I just love basketball.”

To the right of his childhood bed is his favorite quotation from John Wooden, which he easily recites from memory: “Success is a peace of mind which is a direct result of self-satisfaction in knowing that you did your best to become the best you are capable of becoming.”

There are also lines from Charles Barkley, Julius Erving, Kareem Abdul-Jabbar, Larry Bird and others, as well as a list of goals. The last goal on the list: “Become a pro.”

After playing four years at Virginia, Harris was drafted in the second round by Cleveland in 2014. He played sparingly for two seasons on the LeBron James-led Cavaliers. A few months after he was released, he watched Cleveland win its first N.B.A. title.

This season, Harris is averaging 13.4 points a game and through Saturday had the third best 3-point-shooting percentage in the N.B.A. (46.8 percent). Among players with at least 300 field goal attempts this season, he was eighth at 61.4 in effective field goal percentage, trailing only Golden State’s Stephen Curry (62.1) among guards and wing players, according to Basketball-Reference.com.

The pace-and-space era of the N.B.A. has made a player like Harris, a sharpshooter who creates space on the floor and strikes when opportunity arises, more valuable.

“The game has slowed down for him,” Atkinson said. “His first two years he was making turnovers, not reading situations right. He used to be a defensive liability and now we put him sometimes on the best shooter.

“I’m pleased that he’s played beyond his contract. For a guy who wasn’t even in the league, he became a stalwart, a guy you can count on.”

Casual sports fans may struggle to name a player on the Nets, particularly one who is a regular … well, you know … Joe. The team shot an amusing video spoofing Harris’s accuracy in hopes of earning him a spot in the All-Star 3-point shooting contest.

Harris visited spots around Brooklyn — he tossed oranges into a shopping cart, tossed eggs into a hot frying pan and shot some coins into a tip jar.

“Joey Buckets! He deserves to be in the contest,” Carroll said when asked about his teammate. Throughout games, Harris is serenaded — “Jo-ey Buck-ets” by the superfans in the Brooklyn Brigade section of Barclays Center. It’s one of many nicknames. Others include Lumber Joe and Beef Jerky Joe.

Beef Jerky Joe? “Like the Sasquatch from the commercial,” Harris said with a laugh.

Though Harris has blended into Brooklyn, in truth he is an accidental hipster. On a walk to the Food Hall at the Industry City development in Sunset Park, he is wearing black because it just happens to be the Nets’ team color. His slightly slouchy knit cap is pulled low to fight the chilly gusts from the Brooklyn waterfront. The lumberjack beard is a remnant of a no-shave off-season.

Every Nets player except Jared Dudley lives in Brooklyn, a throwback to when the Dodgers were Brooklyn’s team and the players raised their children in the borough and car-pooled to Ebbets Field.

Harris walks to Barclays Center on game days. After practices, Atkinson frequently sees him with his backpack, headed to the subway.

“He signed a big contract; you’d think he’d get a car service,” Atkinson said. “But that’s him, and that’s us. We’ve had a little success, but we’re still humble.”

In the Food Hall, there’s everything a local might expect, like Korean comfort food and an all-avocado restaurant. Harris stops for a cup of … well, you know. Not a nitro, cold brew, or pour over, mind you.

“How do you like it?” the barista asked Harris.