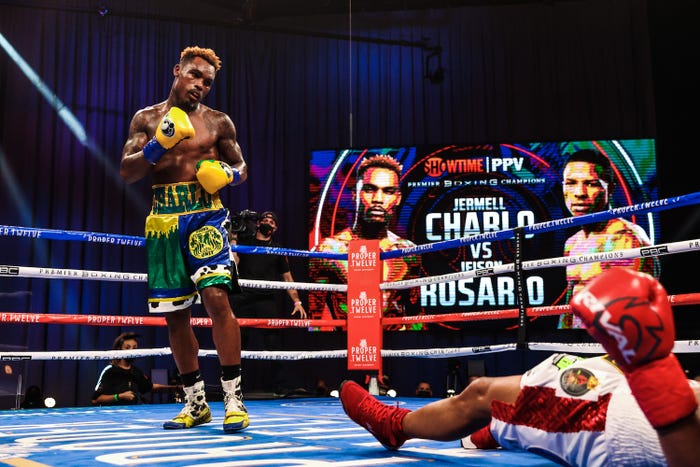 Jermell Charlo scored a body shot knockout over Jeison Rosario, bolstering his reputation as one of the world's best boxers.

The American retained his two super welterweight championships, annexed Rosario's world title, and produced a highlight-reel finish as a jab to the gut left the 25-year-old in a near-paralyzed state as he gasped for air on the floor.

It was no beatdown over an overmatched opponent. What makes Charlo's masterclass so impressive was that it was against a fellow champion regarded as having as good a chance as the Texan to take a win, and the belts, back home to the Dominican Republic.

But it was not to be Rosario's day.

Rosario remains a champion in life

The Dominican grew up in poverty inside a cardboard house on the tough streets of Santo Domingo, and faced child abuse from his mother's boyfriend — a man he admits he once wanted dead.

Rosario turned his life around through boxing, and an underdog win over Julian Williams in January teed-up a high-stakes championship unification with Charlo on Saturday.

Only Rosario was unable to write another chapter in his Hollywood script. Put simply, Charlo did not let him.

In Charlo, the US has an extraordinary fighter who has emerged as the top dog in a wildly competitive 154-pound division.

At the Premier Boxing Champions event broadcast on Showtime pay-per-view, Charlo came of age. He showed his detractors, showed American boxing fans, and showed the rest of the world that he deserves to be spoken of in the same breath to Tyson Fury, Oleksandr Usyk, and Saul Alvarez — three of today's top 15 pound-for-pound boxers.

Charlo is an elite-level boxer

Charlo sought to establish an immediate authority over the match by throwing with bad intentions.

Though he failed to land a single jab, he was perhaps instead determined to let Rosario know he was sharing the ring with a man who could destroy him if he wanted to.

And inside the opening minute of the fight at the Mohegan Sun Arena in Uncasville, Connecticut, Rosario was on the canvas.

Charlo had cracked his skull with a left hand, which caused Rosario to drop and take a count from the referee Harvey Dock.

He recovered sufficiently to enjoy good moments in the next rounds, boxing behind his jab and hitting Charlo with a big right in the third.

But this fight showed Charlo had a difference in punch resistance and a difference in power, absorbing Rosario's punishment, while delivering his own, which had a great effect on his opponent as a second knockdown testified in the sixth.

It was a punching sequence that included a debilitating left hook, which caused Rosario's legs to wobble and, in truth, that was perhaps the beginning of the end of the fight.

The finish came in the eighth when Charlo hit Rosario with a double jab to the midsection.

The first jab to the chest appeared to be blocked by Rosario's guard but the defensive positioning left him vulnerable slightly below. Charlo threw another in quick succession, forcing his opponent to the floor where he winced with his lung capacity now shot.

It was brutal to watch.

Dock started counting to 10, but really, there was little point. All you had to do was look at the shock in Rosario's eyes.

Rosario had no control over himself and struggled to even roll onto his side, so it was no surprise to see him fail to make the count.

He was knocked out.

Charlo had done it.

Though there is one major championship left not his, he is demonstrably the No.1 fighter in his weight class.

And he knows it.

"I definitely proved that I'm more than just a puncher, but I also showed again that I'm a big puncher," said Charlo.

"I'd give myself an A tonight," he said. "I stuck to my game plan and listened to my coach. Everything we did in camp, I used it in this fight.

"I pushed myself the whole way through training camp. It's been a journey for me. I'm bringing the straps home to my family like they told me to.

"I knew that he was going to keep coming after the first knockdown. He kept pressing for four or five rounds until I floored him again.

"I'm growing and learning that the knockout just comes. I know that I have explosive power in both hands," the 30-year-old said. "I utilized my jab more than any other punch in this fight and that's what got me these straps.

"Rosario hits hard, but if you have to know how to wear a fighter down. That's how you take the power out of him."

Charlo admitted that the final knockdown was a weird one, as it is rare to drop a fighter with a jab. And this was a jab to the body.

"I think some of the previous punches I landed hurt him before the jab," he said. "The body shot that landed just hit the right point. I wish him well. I give any man who steps into the ring respect. I hope he recovers and bounces back.

"It's 'Lions Only' forever," he said. "We've been doing this for a long time. Dreams do come true. This is a part of my dream and a part of my destiny. I'm satisfied and I'm happy.