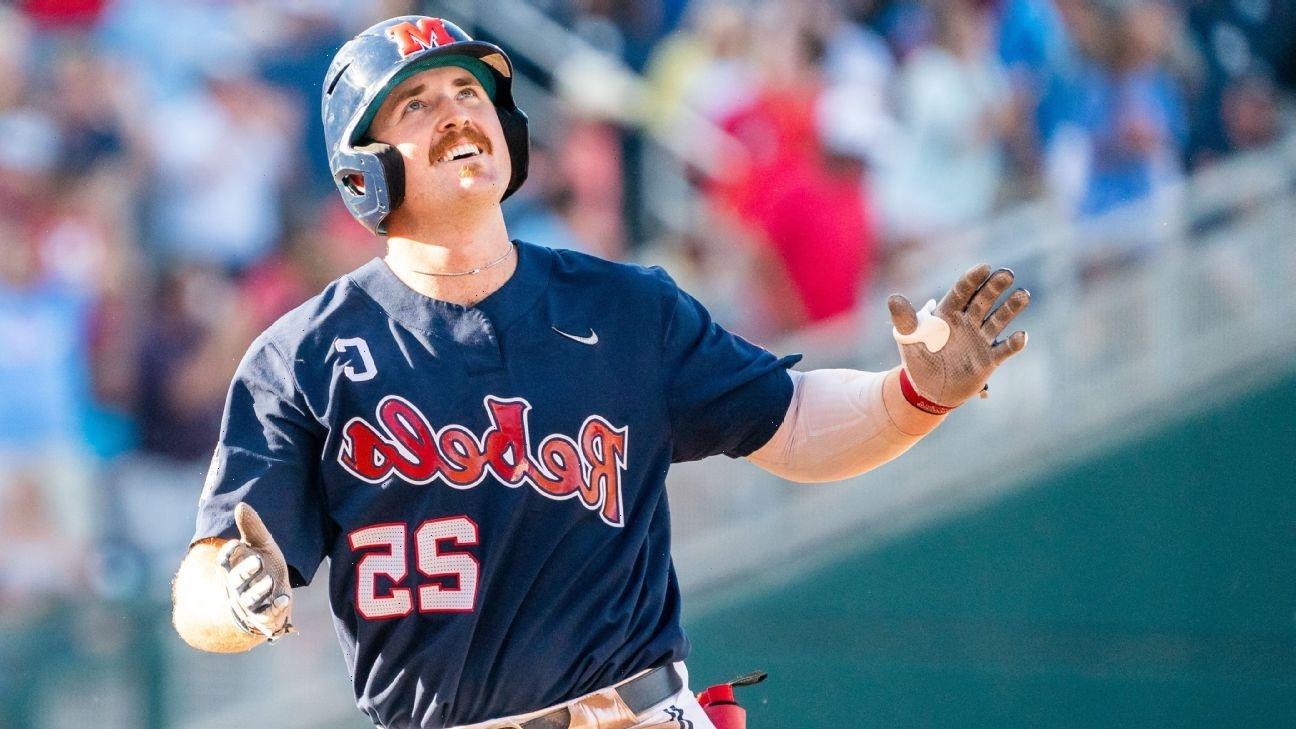 OMAHA, Neb. — Sometimes, it’s just your night. Sometimes, that night just so happens to come along on the biggest stage your sport has to offer … say, the opening stanza of the best-of-three Men’s College World Series finals.

Saturday night was definitely Ole Miss’ night. Now, the challenge is to recapture that Mississippi magic for one more game.

“There is still work to do, and we know that,” explained Tim Elko, the team’s mustachioed first baseman, team captain, motivational speaker and, as of Saturday night, member of the College World Series statistical elite. “But we are also going to make sure we enjoy every bit of this night, because it was special, and it will always be special.”

The Rebels defeated Oklahoma 10-3 in a game that remained tense into the late innings and then suddenly turned into a rout. Now, a team that was among the last four invited to the 64-team NCAA baseball tournament is one win away from being the last team standing.

“I have been doing this for a while, and I’ve never heard anything or felt anything in a college baseball stadium like I did tonight,” said Ole Miss coach Mike Bianco, who has participated in the College World Series six times spanning more than three decades, as a catcher, assistant coach and head coach.

“We have amazing atmospheres at [home stadium] Swayze Field, but that atmosphere tonight, that was like a football game. I think half of Mississippi showed up in Omaha today, and they did that hoping to see something special. The energy coming out of those stands told me they felt that happening.”

It’s a feeling that washed over them as soon as they arrived in town and all day Saturday, and it ramped up as they arrived at Charles Schwab Field. When the gates opened and the powder blue-clad faithful poured into the stadium, they were handed a giveaway item from the ballpark title sponsor: a towel to be waved that was dyed in the company’s signature color of powder blue. It was a coincidence. Maybe.

“Naw man, this ain’t no coincidence,” declared Tim Davis, a salesman from Memphis, Tennessee, as he started swirling his towel above his head. “This is destiny, son!”

When the game started, the 25,813 in attendance, overwhelmingly dressed in that blue, braced for Oklahoma’s high-powered offense to get cranked up early as it has so often. Instead, it was Ole Miss that posted two runs in the first inning and one each in the third and fourth. Everyone settled in expecting to witness the gigantic on-paper advantage for Oklahoma, having ace Jake Bennett on the mound on a week’s rest, unfurl before them. Instead, it was Ole Miss reliever Jack Dougherty, making his first start since March, who pitched five innings of perfect baseball and combined with true freshman Mason Nichols and sophomore Josh Mallitz to not only win the game but also help hit the reset button on the Rebels’ rotation with postseason ace Hunter Elliott ready to go Sunday afternoon after five days off.

The fifth-year senior went 4-for-5 at the plate, the first MCWS four-hit finals game since 2009. Teammates T.J. McCants, Calvin Harris and Justin Bench blasted back-to-back-to-back homers in the top of the eighth, the first team to do that since LSU in 1998 and the only one to do so at Charles Schwab Field since it opened and started hosting the series in 2011.

It was an impressive, unexpected, overwhelming performance, punctuated by the de facto home crowd and underlined by the fact that since the MCWS finals moved back to best-of-three format in 2003, 11 of 18 teams to win the title jumped out to a 1-0 start.

But history doesn’t exactly matter to these Sooners.

“We’re going to learn from our lesson,” said Oklahoma first baseman Blake Robertson, the sophomore growing more than a little red in the face as he fielded postgame questions about the loss and his 1 for 4 performance.

“We’ve being doing it all season. Took care of Florida down in Florida [during the NCAA Gainesville Regional]. Went to Virginia Tech at their place and took care of business. I really don’t think a home crowd for [Ole Miss] does anything. I think we actually enjoy shutting up the crowd.”

Both of those wins in enemy territory came in elimination games, and when the Sooners have their pre-Game 2 breakfast on Sunday, they will no doubt be reminded of another decidedly less depressing MCWS finals statistic: Each of the past three national champions have bounced back from losing Game 1 to win it all.

Besides, who knows better how to circle the wagons when surrounded than a program that literally owns a wagon, the Sooner Schooner?

“That’s what’s awesome about baseball. You can go 4-for-4, 5-for-5, and then the next day you can go 0-for-4, 0-for-5, and that’s why you have to come back and keep playing the game and learned from the lessons that you learned,” said Oklahoma coach Skip Johnson, who has a lot of his own Omaha experience after a decade as an assistant under Augie Garrido at Texas.

Sometimes, it is indeed just your night. Now we see who will have just their day.