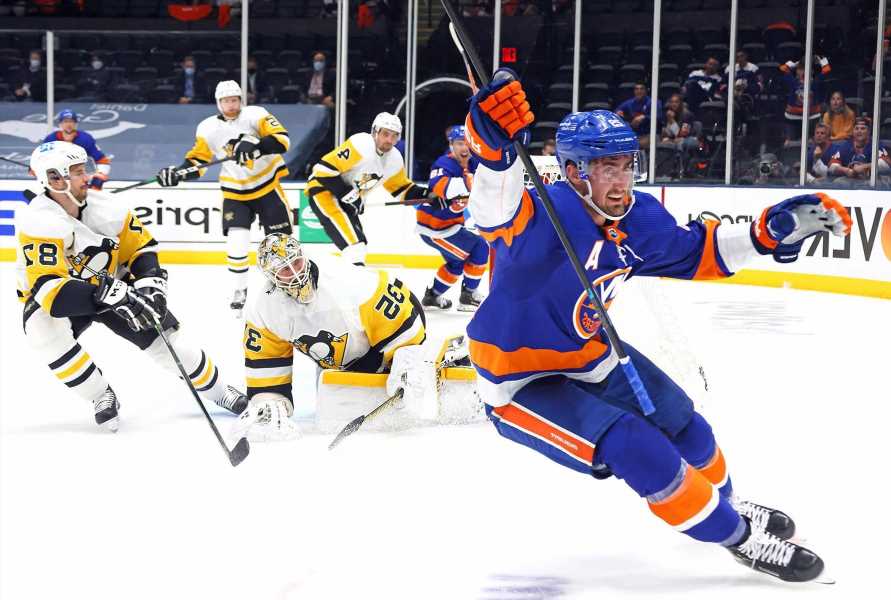 The dynamic between goalie tandem after crucial Islanders switch

Islanders hope home-ice advantage the key to closing out Penguins

The NHL is a hard league, the East is a hard division, and this was a hard first-round series, as Islanders head coach Barry Trotz likes to put it.

But the Islanders are now one of the two teams still standing in the loaded East after a 5-3 win over the Penguins on Wednesday night at Nassau Coliseum punched their ticket to the second round of the playoffs.

The fourth-seeded Isles will face the third-seeded Boston Bruins, who have been patiently waiting since Sunday, when they finished off the Capitals in five games. The series — er, division finals? — will likely begin this weekend.

All but one of the Islanders’ four wins in this six-game series saw the team grind through the Penguins’ pesky speed and opportunistic play. Wednesday night was no different.

Both teams exchanged two goals in an eventful first 20 minutes, but the Isles owned the second period. They fell back into the bad habit of allowing quick goals, which carried over from the first when Penguins center Jeff Carter scored roughly 90 seconds after puck drop, with Pittsburgh going up 3-2 at 1:53 of the middle frame.

But the Islanders, as they did throughout the series, didn’t shy away from the challenge. They attacked it head on.

A sequence of brilliant passing from the Islanders led to Josh Bailey teeing up Brock Nelson at the left post to knot the game 3-3. Thirteen seconds later, Ryan Pulock’s slap shot off a faceoff win blew past Penguins goalie Tristan Jarry for the Islanders’ first lead of the night.

The two scores matched the Isles’ franchise playoff record for fastest two goals in a game.

The Coliseum taunts of Jarry came early and often, but they intensified after the Islanders took the lead. It led to Nelson’s second goal of the night, when he sent a soft shot right between Jarry’s pads at 11:34 of the second for the 5-3 lead.

Rookie goalie Ilya Sorokin, who finished with 34 saves on 37 shots to improve to 4-0 this series, denied Evgeni Malkin on the breakaway toward the end of the period to protect the two-goal lead.

The Islanders got off to one of their only-a-goal-will-wake-us-up starts. On a Penguins’ two-on-one rush, Carter went five-hole on Sorokin, which effectively put the Isles on notice. Jumping out on an odd-man rush of their own not too long after, Nelson sent a leading pass to Anthony Beauvillier, who beat Penguins star Sidney Crosby to the slot and roofed a backhander to tie the game 1-1.

Both teams continued to exchange scoreboard blows. Penguins winger Jake Guentzel capitalized on a Penguins’ power play, with a shot from the high slot that deflected in off Pulock’s skate. Just over a minute later, Jean-Gabriel Pageau sent a floater on net that rebounded to Kyle Palmieri, who cashed in to even the score once again.