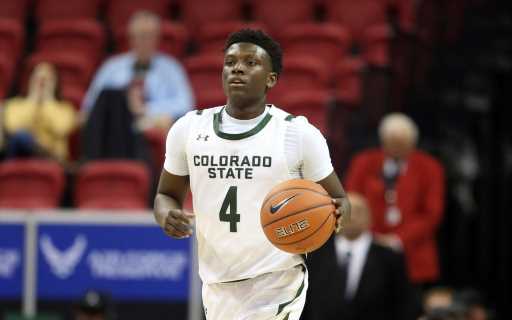 Colorado State point guard Isaiah Stevens writes down his basketball goals before each season. Some big. Some small.

This year, one goal stands above the rest.

“Get this team back to the NCAA Tournament,” Stevens said.

The Rams’ tournament drought is real, as many current players were attending middle school the last time CSU went to the Big Dance in 2013. Yet Stevens’ desire for a return in 2021 goes beyond just bravado as the Rams (12-4, 9-3 MWC) prepare for a two-game road swing this week against Wyoming (10-7, 4-6).

McKinley Wright deserves respect as one of the greatest players in CU Buffs history. However, nearing the 20-game mark of this season, Wright trails Stevens statistically in points per game (14.8 to 15.5) and assists (5.7 to 6.6). Stevens, like Wright, also has a knack for being at his best in the biggest moments — hitting game-winners as a true freshman last season against Loyola-Chicago and Nevada.

“Whenever you have confidence in yourself and your abilities, the moment doesn’t necessarily change who you are as a player,” Stevens said. “The ball is still going to bounce the same. You’ve still got to shoot it all the same. You’ve just got to be confident in your work.”

“The separator for (Stevens) is the mental side,” CSU coach Niko Medved said. “He’s an incredible competitor. He’s incredibly coachable. He’s all about the team. He’s the first guy to never point fingers but to always look at himself. That’s so rare for guys to have all of that. He has such a maturity about him for a young guy.

Stevens, the reigning Mountain West Freshman of the Year, has logged double-digit scoring efforts in 14-of-16 games this season. He dropped 10 assists on San Diego State and Boise State. But it’s the behind-the-scenes practice plays that impress CSU teammates even more. Stevens seemingly lives in the gym.

“He’s so, so competitive that he’s got an advantage over a lot of people,” Rams forward Adam Thistlewood said. “It’s just how he approaches every drill, every rep and every situation. He’s got that mentality that he needs to be successful.”

Medved added: “It’s not the one moment in the game. It’s the daily things that you do over and over again where you earn that respect from your teammates and your coaches.”

While Stevens is vocal about his desire to reach the NCAA Tournament, he’s also conscious of the need to stay present for game preparation, especially against Wyoming. The Cowboys ended CSU’s season a year ago in the first round of the Mountain West tournament — an upset loss that only increased Stevens’ craving to reach the NCAA Tournament. “That’s been driving this whole program,” he said.

As of late Wednesday, ESPN college basketball insider Joe Lunardi projected the Rams as one of the last four teams to make it into the field of 68, with CSU as a No. 12 seed.

A clean sweep of Wyoming in Laramie on Thursday and Saturday would only bolster the Rams’ postseason resume.

“It’s a rivalry game. There will be some good energy in the gym,” Stevens said. “If we go in there with the right mentality, I like our chances.”

Marvel movies and rumors go together like peas and carrots, so we can forgive fans for being a little skeptical...