Kennedy weighs in on the NBA’s ‘social justice hypocrisy’

Kennedy gives her take on the NBA’s ‘social justice hypocrisy.’

LeBron James wields a ton of power when it comes to the NBA and it showed last week as the league tried to reconcile with China over an executive’s tweet supporting pro-democracy Hong Kong protesters.

James, who is one of the most outspoken athletes in any professional sport in the U.S., stayed silent while in China about the tweets, even as the Communist totalitarian government ripped down signage, canceled community events and barred media availabilities in the days leading up to two preseason games between the Los Angeles Lakers and the Brooklyn Nets.

But behind closed doors, James reportedly expressed his dissatisfaction with NBA Commissioner Adam Silver in a meeting over his refusal to punish Houston Rockets general manager Daryl Morey for his tweet. James asserted that if a player or a coach had tweeted something similar and caused similar economic damage to the league that there would be some sort of consequence, ESPN reported Tuesday.

Silver snapped back, saying that he was allowing Morey to have the same freedom to speak out against issues as he had with any other player or coach – like James – who have spoken out against President Trump and his administration and policies both domestic and abroad, according to ESPN. Silver said he hadn’t punished anyone for that and will not.

James said in the meeting that the issue was too much for the players to take on, according to ESPN. As Silver and others had left the room after the meeting, James reportedly took the ball and wanted the players to be in agreement on how they should handle the situation while they were in China.

The end result: Silence. No player spoke out about Morey’s tweet while in China even as the Chinese government and Chinese sportswear brands cracked down on the league and the Rockets as a whole.

Outside of China, things were different.

Silver had expressed his support for Morey’s use of freedom of speech in a public statement and vowed that he wouldn’t punish the general manager over the tweet. He also said he regretted the outcome of the tweet.

In Japan, where the Rockets were playing their own preseason games, James Harden apologized to China for the Morey tweet while a team official would eventually shut down a CNN reporter who asked about the tweet and the fallout from it.

Back on American soil, James’ statements on Morey were completely separated from what Silver had expressed in his own statements. James broke his silence Monday, saying Morey was uninformed when he expressed his support for the Hong Kong protesters.

“I’m not here to judge how the league handled the situation,” he told reporters. “I just think that, when you’re misinformed or you’re not educated about something – and I’m just talking about the tweet itself – you never know the ramifications that can happen. We all see what that did, not only did for our league but for all of us in America, for people in China as well. Sometimes you have to think through the things that you say that may cause harm not only for yourself but for the majority of people. I think that’s just a prime example of that.”

He added in a tweet: “My team and this league just went through a difficult week. I think people need to understand what a tweet or statement can do to others. And I believe nobody stopped and considered what would happen. Could have waited a week to send it.”

On Tuesday, he spoke for what he said would be the last time on it. He said he wanted to focus more on the societal issues that have been plaguing the U.S. and couldn’t worry about geopolitical problems. 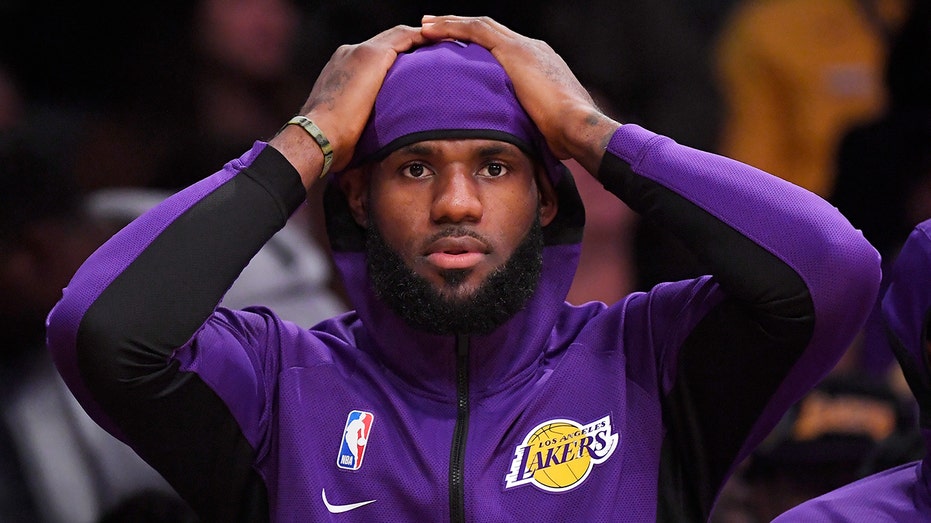 “I'd be cheating my teammates by continuing to harp on something that won't benefit us trying to win a championship because that's what we're here for,” he said.

He added: “We are leaders, and we can step up at a times, but you don't feel like you should upon things you shouldn't have to."

“There's things that happen in my own community, trying to help my kids graduate high school and go off to college. Trying to make sure the inner city kids that grew up in my hometown can have a brighter future and look at me as inspiration to get out of the hellhole of the inner city. And we don't talk about those stories enough.

“When the issue comes up, if you feel passionate about it or you feel like it's something that you want to talk about then so be it. I also don't think every issue should be everybody's problem.”

Aside from James or Harden, no other player has taken a side when it comes to the China issue.

It appears that James is in fact becoming the public shield as the NBA gets lambasted for not supporting those fighting for freedom and rather siding with Beijing.