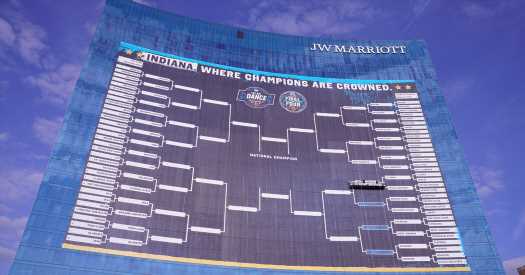 Line by line, workers update this avatar for the N.C.A.A. men’s tournament. 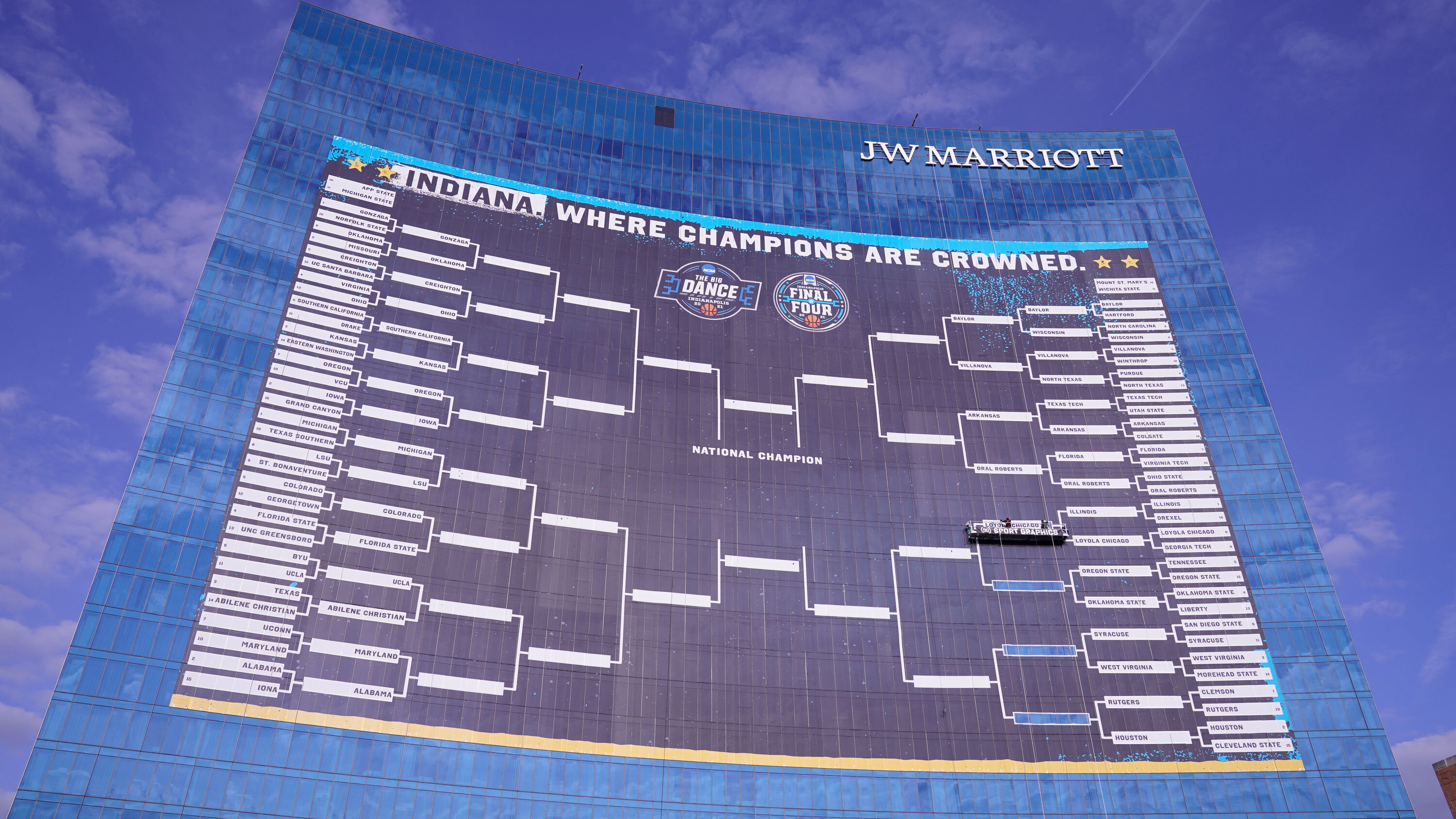 Photographs and Video by A.J. Mast

INDIANAPOLIS — Passers-by stop, crane their necks and fix their glances skyward. Drivers stop at a red light and look up to admire the view. College basketball players have gawked, too, making sure to take selfies with it.

If the N.C.A.A. men’s basketball tournament’s avatar is a bracket, then it is little surprise that the gargantuan one draped across 18 stories of Indiana’s tallest hotel has drawn so many worshipers.

Pilgrims who arrived in the morning on recent days have been in for an additional treat: watching workers elevated on a swing stage fill in the bracket with the teams who advanced on the previous day. There is a vicarious thrill in watching the unfurling of, say, Oregon or Oral Roberts, that stamps the prior day’s achievement as official.

So it was on Saturday morning when a group of Rutgers fans cheered when their school’s name was rolled out on the line in the bottom right corner of the bracket, affirming the Scarlet Knights’ first tournament victory since 1983. (It was the end of the bracket lines for Rutgers, whose first trip to the tournament in 30 years ended with a second-round loss to Houston.)

The teams themselves have taken notice. Players from Wisconsin and Syracuse have posed for photos in front of the bracket, as has the entire Oral Roberts team. 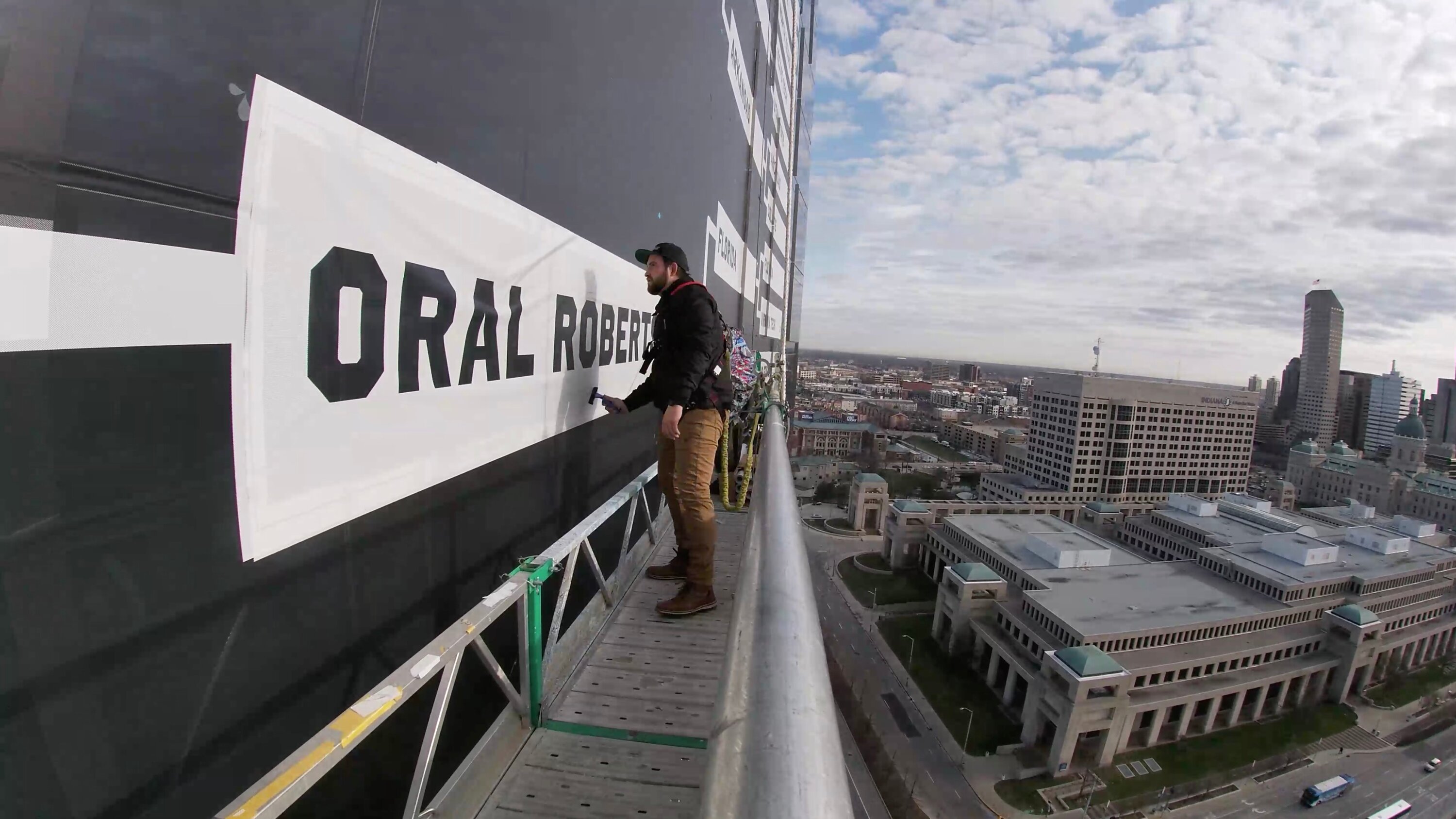 Sometimes, though, the thrill is tinged with schadenfreude.

A pair of Texas Tech fans, Gary Housouer and Matt Beatty, scrambled to the top of a six-story parking garage across the street on Sunday morning just in time to catch the unveiling not of their Red Raiders, who had beaten Utah State in the first round, but of one of the tournament’s early darlings, 14th-seeded Abilene Christian.

“We hate Texas,” said Beatty, a native of Austin who was giddy that the third-seeded Longhorns had been beaten. “It’s hard living in Austin.”

“Not today it ain’t,” laughed Housouer, who is from Dallas.

The enormous bracket is among many elements of college basketball’s three-week celebration that have been transformed because the N.C.A.A., in an effort to mitigate disruptions from the pandemic, has moved the entire men’s and women’s tournaments to single-city hubs and their surrounding areas: San Antonio for the women and Indianapolis for the men. Normally, the preliminary rounds are splayed across the country, building interest toward a final long weekend, the basketball bacchanal known as the Final Four.

A bracket was first put up on the nearly 40-story, 400-foot high J.W. Marriott for the last Final Four here, in 2015. But as teams worked their way through the regionals, the only ones who saw the names being moved along were Indianapolis residents — at least until the Final Four. 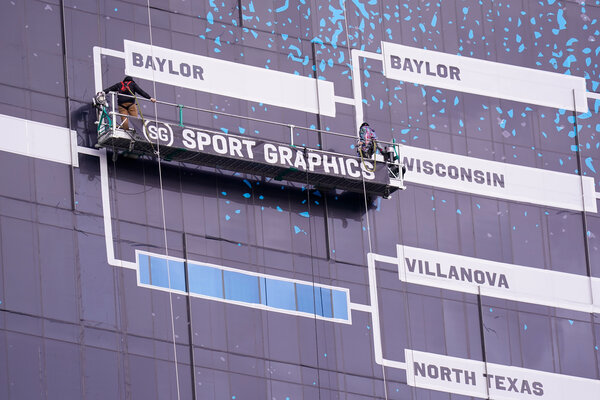 Now, all 68 teams have had a chance to see the bracket in action, and when the games resume on Saturday, 16 teams will still be competing to reach the championship game.

The ones doing the heavy lifting are the brave souls who ride up on the swing shelf, a roughly 30-foot wide, 3-foot deep scaffolding that is essentially an open-air elevator. It takes two workers up and down each side of the bracket, filling in the blanks with the winning teams.

“A lot of people think they can do it until they try,” said Shane Margherini, who handled Monday morning’s shift, and is one of about a dozen workers who update the bracket. His partner, Brandon Tischbein, said he appreciated the view, hundreds of feet above ground with a view of downtown.

“You’re free up there,” he said. “You’re not stuck behind a glass window.”

The pair are harnessed, not to the swing stage, but to another set of lines that run down from the roof of the hotel. They are outfitted with a rope grab that acts like a brake. “The stage can fall and I’ll dangle from the side of the building,” Margherini said.

They are also equipped with a knife, to splice and cut the 4-foot-by-25-foot vinyl panels, and a squeegee to secure them to the building. Andy King, the project supervisor, described the vinyl as akin to a big sticker. They are carried up in rolls, the backing paper is removed as it is unrolled and a squeegee is applied to be certain it sticks.

It took about two hours each day to run through the first round — with 16 winners each day — and about half that for the second round. With fewer lines to fill each day, the process is quicker. (It took 100 hours to print 800 strips, which took about a week to put up. The bracket covers 47,000 square feet.) When a national champion is crowned on April 4, the school’s logo will go up.

The work begins overnight when the winning teams are printed from computer files and delivered early the next morning. “I wasn’t expecting to print Oral Roberts again,” said King, referring to the 15th seed in the South region that has won two games.

The workers ride in a cherry picker to a third-floor balcony where they board the swing stage, avoiding entering the hotel that the N.C.A.A. is trying to keep a tightly controlled environment. They wait until 9 a.m. to begin their ascent to avoid startling a hotel guest — in this case players, coaches and staff of all the teams who are isolated here — with an unannounced wake-up call of a couple of guys swaying outside their window. There is a spotter down below double-checking to make sure the names are in the proper spot.

One wrinkle that must be accounted for is the weather. If it is sunny, the vinyl becomes stickier and harder to work with. If it is rainy, it won’t stick as well. And if it’s windy, nobody wants to be bouncing around like a lottery ball 30 stories up, no matter how secure the harness.

“It’s a good business, but a challenging one,” said Frank Hancock, the owner of Sport Graphics, which first put up an oversized banner here for the Super Bowl after the 2011 regular season. “You’re not going to get a second chance to screw up an event.”

The banners, at least ones this large, are unique to Indianapolis. The N.C.A.A. has not put them up in other recent Final Fours, nor have they done so in San Antonio for the women’s tournament. In fact, the signs that are omnipresent here — covering pedestrian bridges, lampposts and the sides of buildings — are absent in San Antonio.

Eli Lilly, the pharmaceutical manufacturer that is headquartered here, has contributed close to $1 million to spruce up downtown for the men’s tournament, but the cost of the bracket is covered by the N.C.A.A., along with several local sports and entertainment booster groups, according to Brett Kramer, a spokeswoman for one of the groups, the Indiana Sports Corp. An N.C.A.A. spokeswoman refused to disclose how much the organization spent on the bracket, or how much it contributes to signage at the two tournament sites.

Hancock said others chipped in because the N.C.A.A. suffered a $56 million loss last year because of the pandemic, leading it to reduce staff by about one quarter from a year ago.

“You look at this and think, ‘the N.C.A.A. has money for this and they don’t have money for that?’” Hancock said, pointing up at the bracket. “The N.C.A.A. had a heck of a time during this year. There were no funds. This is a Democratic town in a Republican state; we’re used to everybody coming together for the best of the state.”

That was not the only area where there was a spirit of cooperation.

The weather did, too, with the rain that was supposed to arrive on Tuesday holding off until the afternoon and evening. The forecast is for more of the same through the week, but for it to be clear and cool by Saturday when the field will begin to be reduced further, just like the workload that’s up in the sky.