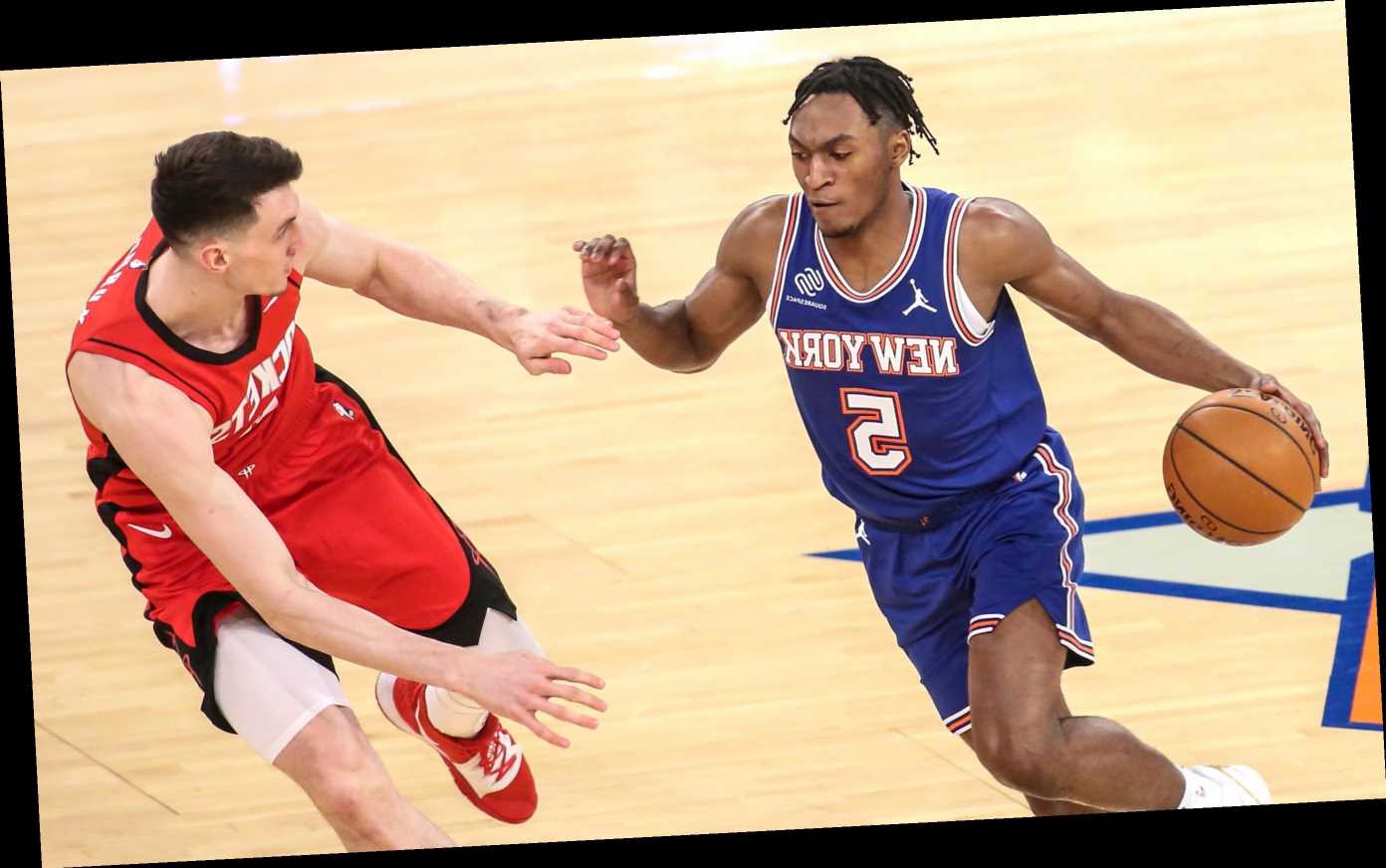 Young Knicks’ rise has caught the eye of NBA star

There’s one thing Tom Brady doesn’t have yet

A Frankenstein monster is destroying the NBA

Knicks planning for life without young star after devastating diagnosis

A costly weekend due to Mitchell Robinson’s injury still resulted in two important wins against undermanned opponents for the Knicks.

Immanuel Quickley connected on four 3-pointers and scored 22 points — while replacement centers Nerlens Noel and Taj Gibson played well in the first game without Robinson — as the Knicks’ depth led them to a convincing 121-99 victory Saturday night over the Rockets at the Garden.

Derrick Rose contributed 16 points off the bench as the Knicks (13-15) took advantage of Victor Oladipo’s absence for Houston due to a foot and ankle injury, just as they had the previous night against the Wizards without NBA scoring leader Bradley Beal.

Julius Randle also scored 22 points and Elfrid Payton added 15 for the Knicks, who will host the Hawks on Monday. John Wall led the Rockets (11-15) with 26 points, while Eric Gordon finished with 24.

With Robinson facing the likelihood of surgery after breaking a bone in his right hand during Friday’s win in Washington, Noel made his first start of the season and finished with 10 points and six rebounds in a season-high 32 minutes. Gibson replaced Noel on the second unit and contributed four points and five boards in 16 minutes.

“Our starters and our bench, they’re similar in many ways,” Knicks coach Tom Thibodeau said. “The individual strengths are a little bit different with each guy. But in terms of what they bring for the team, you can make a case that you can start all the guys that are on the second unit.”

Noel came in averaging only 17.5 minutes per game off the bench, but he ranks fifth in the league with 2.0 blocked shots per game.

Noel converted an early alley-oop pass from Randle, and Reggie Bullock buried three 3-pointers during a 16-3 run for an eight-point Knicks cushion midway through the first quarter. Their second unit — with Gibson replacing Noel — closed off the period with buckets by rookies Quickley and Obi Toppin (11 points) for a 30-25 advantage.

The lead was extended to 14 with a 15-4 spurt, with the backcourt tandem of Rose and Quickley accounting for nine points. The duo finished with seven apiece in the half, and the Knicks led by as many as 17 while carrying a 63-47 lead into intermission.

It was the third straight impactful game with the Knicks for Rose since he was acquired last weekend from Detroit. He even studied videos with assistant coach Andy Greer at the team’s Tarrytown training facility after the Knicks returned to home from Washington late Friday night.

“He’s a great student of the game,” Thibodeau said. “He’s always had that. I think that is what has allowed him to adapt, grow and change. I think you see that with a lot of players that are dominant players. They are constantly adding to their game.

“So it doesn’t surprise me. I think he’s put a lot of time into trying to understand his new teammates and what their strengths are and how he can better effectively use them.”

Randle finished the half with 13 points and Noel added eight on 4-for-5 shooting as the Knicks shot 52.2 percent from the floor and committed just one turnover through the first two quarters.

The Knicks got sloppy in the third, committing four early turnovers, enabling the Rockets to cut the lead to five with 3:40 remaining. Wall pumped in 15 in the quarter, but a dunk by Noel and a two 3-pointers by Quickley pushed the Knicks’ advantage to 87-75 entering the final quarter.