That’s what the Hockeyroos did in the women’s hockey final against England and, subsequently, they lost 2-1.

Buoyed by a raucous and sweaty home crowd, England led 2-0 for all but 19.4 seconds of the match until Australia’s Rosie Malone scored from a penalty corner. 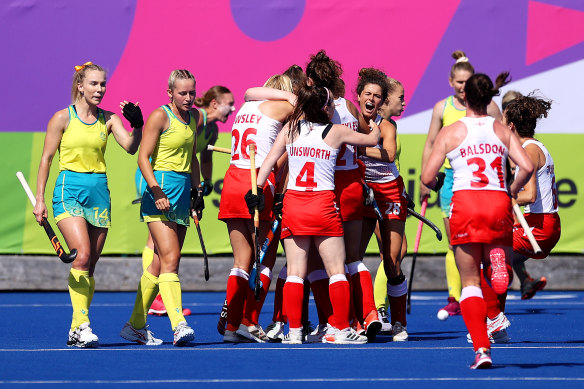 England celebrate a goal in Birmingham.Credit:Getty

From the restart, Australia somehow managed to get the ball back down England’s end but they failed to get into the circle for one final Hail Mary shot that could’ve levelled the scores.

On fulltime, midfielder Kaitlin Nobbs fell to her knees — and afterwards blamed herself for not flicking the ball over her head into the circle.

“I should have over-headed that last ball,” she said. “We had 10 seconds left, it’s never too late. That was a physical, emotional drain. It was a really long game and I think it just hurt. Now I’m seeing the positives.”

It’s a heartbreaking loss for the Hockeyroos, adding to their defeat in the gold-medal match to New Zealand on the Gold Coast four years ago.

But there was a silver lining, though, in the silver medal.

Australian hockey has had a complete rebuild in the past year since reports surfaced about a “toxic culture” within the sport.

There’s been a huge turnover of players and staff. A month ago, they won bronze at the World Cup. Now a silver against a world-class England team. 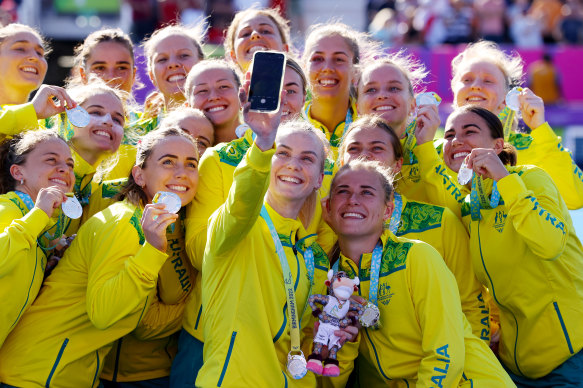 Australian hockey has had a complete rebuild in the past year since reports surfaced about a “toxic culture” within the sport.Credit:

“We’ve built throughout the tournament. Today wasn’t our day, but going from World Cup to Commonwealth Games, we’ve grown and we’ve shown that we can be really consistent. We’ve had so much fun this tournament. We’ve got Paris in two years, that will come around quickly.”

England had the best of it for the entire match. The result never looked in doubt.

They failed to take advantage of three consecutive penalty corners in the opening quarter but, in the second, made the most of their territorial and possession advantage to score twice.

The first came off the stick of Holly Hunt, who blasted the ball from the top of the circle, past Australian keeper Aleisha Power. 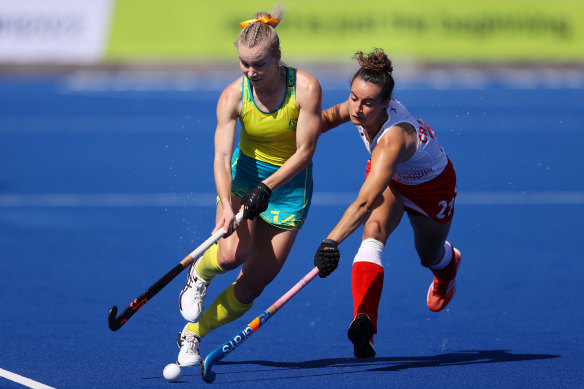 Greta Hayes competes with England’s Fiona Crackles during the final.Credit:

The second came just minutes later when Tess Howard scored from a deflection, much to the delight of the heaving, sweating crowd.

After the break, Birmingham University’s clock, better known as “Old Joe” rung to signal 4pm. It may as well have been a death knell for the Hockeyroos.

They held their own defensively and in midfield, but whenever they were presented with a scoring opportunity they failed to convert.

To be frank, the difference could have been much more.

England hit the post in the third quarter and went perilously close to scoring early in the fourth.

Meanwhile, their keeper, Maddy Hinch, was superb at the back, repelling the few chances Australia created.