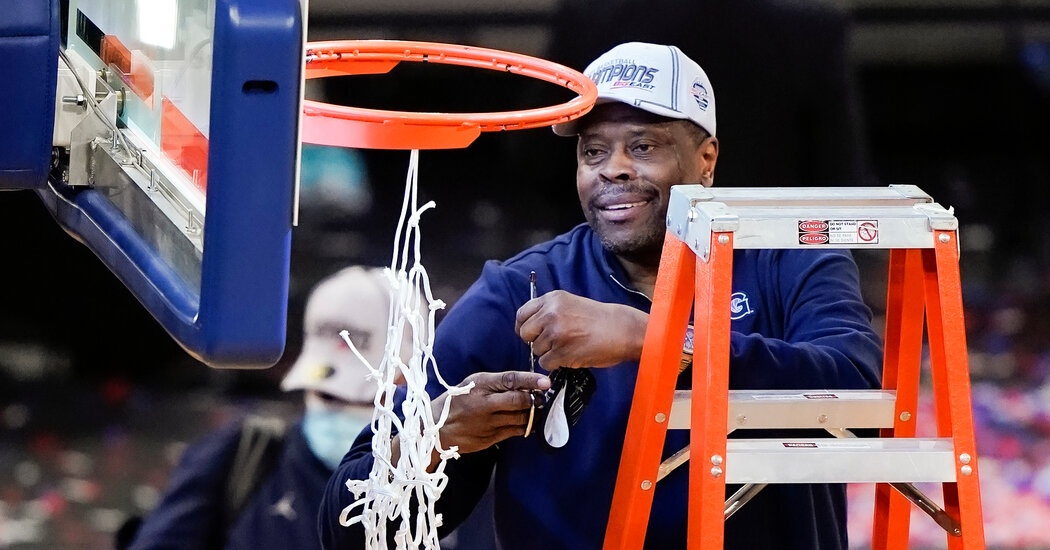 Patrick Ewing was upset last week when unwitting security staff at Madison Square Garden asked him for identification in the hallways of a building he called home for 15 years. They were unaware, apparently, that the former star of the Knicks, whose No. 33 hangs in tribute inside the famed arena, was the same man coaching the Georgetown men’s basketball team at the Big East Tournament there.

As a Hall of Fame player, Ewing was always easy to identify: He was the man in the middle, a force at both ends of the court who carved out one of the best careers — if not the best — of any Knick.

But Ewing the coach has often been overlooked.

It has taken Ewing almost 20 years, much of that time spent toiling at the margins of the game, to gain even a modicum of appreciation as a coach — at least from the outside world.

Some of that acclaim finally came showering down last week when Ewing’s Georgetown Hoyas completed their stunning rise from the bottom of the Big East standings to its conference champions. For the first time since 2015, the program returns to the N.C.A.A. men’s tournament, where it will face Colorado on Saturday.

“Vindication? Not yet,” Ewing said. “We still have a lot of work to do. But I have shut a lot of people up.”

As Ewing walked triumphantly into the Georgetown locker room after the final win at the Garden last week, he yelled out, “Started from the bottom, now we’re here,” the lyrics to a Drake song that Ewing turned into a theme for the team’s stirring drive to a title. But the words could also reflect Ewing’s 15-year odyssey as an assistant coach in the N.B.A., a lengthy prelude to Georgetown finally giving him the chance, in 2017, to prove his ability as a head coach.

When he was hired, some fans of the program complained. After all, he had no head coaching experience and no experience on a college bench.

He had gazed out on more than 1,200 N.B.A. games, registering almost every imaginable play, mismatch and defensive scheme. And yet no one gave him the chance to be a head coach in the N.B.A., a slight that stings Ewing but never stopped him.

“His sacrifice to be an assistant coach for 15 years, as great a player as he was, was never given the credit that it was due,” said Jeff Van Gundy, Ewing’s coach and boss with the Knicks and Houston Rockets. “No great player ever did that, and he didn’t just do it, he embraced it. Could anyone imagine Hakeem Olajuwon doing that, or David Robinson?”

Van Gundy agrees that Ewing suffered what many, including Ewing and John Thompson, Ewing’s coach and mentor at Georgetown, have described as a size bias that favors guards over big men for coaching jobs. Historically, Black candidates have also been vastly underrepresented in the coaching ranks. But Ewing and his supporters have been more apt to publicly discuss the height issue, a prejudice that especially applies to centers, the position the 7-foot Ewing played so expertly. 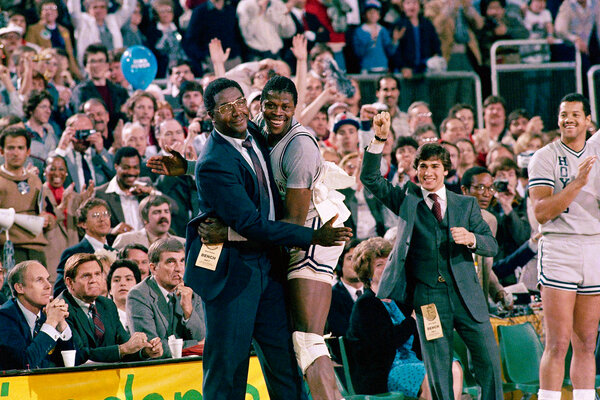 “It’s almost comical when you look back at one of the best players to ever play the game, who spent all that time studying his craft, and he wouldn’t be hired,” said Ronny Thompson, John Thompson’s son and the self-described chief of staff for the Georgetown coaches. “My father always said, ‘People in this world discriminate not just because of color, they discriminate because of size.’”

That may explain why former guards like Steve Nash, Jason Kidd, Derek Fisher, Mark Jackson, Doc Rivers and Steve Kerr — to name only a few — were given head coaching jobs without any previous experience. They could not point to even one day as an assistant, breaking down opposing teams on videotape, formulating game plans and meeting with fellow staff members, as Ewing did for a decade and a half.

He dove into coaching immediately upon retiring as a player, joining the Washington Wizards as an assistant coach to Doug Collins in 2002. Ewing said he fell in love with the job and went on to serve as an assistant to Van Gundy on the Rockets, then Jeff’s brother, Stan Van Gundy, with the Orlando Magic and finally as Steve Clifford’s assistant and an associate head coach with the Charlotte Hornets.

Clifford recalled a meeting where the staff spent 45 minutes lamenting how one of their players had developed a poor attitude. When the meeting ended and Clifford left, Ewing went to the other coaches and insisted they reconvene immediately, even without Clifford.

Ewing told the group that they had wasted the meeting grousing and had not properly prepared for that day’s practice. He said their job was to help Clifford make each player and the team better, and they must now get back to work.

“He never mentioned to me that he had done that,” Clifford said. “The other guys told me about it, and they still talk about it to this day.”

Van Gundy watched as Ewing flourished in the three years he was in Houston, and said it was obvious that Ewing was ready to be a head coach. But the offer never came, not even from the Knicks, who had a revolving door of coaches during the time that Ewing was an assistant.

“You’re going to have doors shut in your face,” Ewing said after the Big East championship. “I didn’t pout. I just tried to get better, get better at my interviewing skills, get better at the craft, learn from all those people that I worked with, and try to be the best coach I can be.”

Coaching in the N.B.A. was the dream, but Ewing made an exception for Georgetown because of his history there, and because John Thompson, who died in August, had urged him to do it.

Ewing, 58, embraces the opportunity to coach in Thompson’s tradition. Occasionally, he will gesture to a courtside chair with a towel draped over it — the same chair where Thompson sat for practices with his signature towel slung over his shoulder — and tell his players, “You think I’m being hard on you? The guy that sat in that chair was twice as hard on me. But it was because he believed in us, and I believe in you guys, too.”

Ewing recognizes that his job is about more than just winning tournaments. It is also about serving as mentor and guiding light, and speaking up — as he did last week at Madison Square Garden — when he perceives an injustice. It is the enduring legacy that the outspoken Thompson left for him.

Ewing was quick to use his megaphone during the social unrest after the killing of George Floyd, and Georgetown is one of the schools whose uniforms bear words of protest.

Of course, winning helps raise the volume on the megaphone, and Thompson had an advantage that Ewing doesn’t — a player like Ewing. The Hoyas went into this season predicted to finish in last place in the Big East after the loss of three players. They had to rely on a team with eight new faces, including five freshmen. After a 3-8 start, they shut down in January because of coronavirus issues and went three weeks without playing a game.

When they returned, Ewing reconfigured the lineup and went with bigger players to beef up the defense and rebounding. The Hoyas finished by winning 10 of their last 14 games. Van Gundy, who says he records all of Georgetown’s games and watches them only after he knows the score (he is too nervous to watch live, he said), called Ewing’s adjustment one of the more “astute” tactical decisions he has seen this season, critical to the team’s recent success.

Colorado (22-8) presents a challenge, but whatever happens in the N.C.A.A. tournament, Georgetown has an intriguing future. Ewing has amassed an elite class of incoming freshmen, including Aminu Mohammed, a McDonald’s all-American forward, and Ryan Mutombo, the 6-foot-11 son of former Georgetown and N.B.A. star Dikembe Mutombo.

In a year when many doubted that Georgetown had the talent to compete, Ewing pushed his team from bottom to top, and along the way, his recognition as a coach has soared, even at Madison Square Garden.

“It allows people to see what those of us who have worked with him already knew,” Van Gundy said, “that the guy can coach basketball.”