Mitchell Starc has fired another broadside at long-time critic Shane Warne, declaring he pays no attention to the leg-spin great, as he closes in on joining Australia's 200 club.

Australia's players returned to their home ports on Wednesday for a few days off before re-convening in Melbourne this weekend to prepare for an eagerly awaited Boxing Day Test. 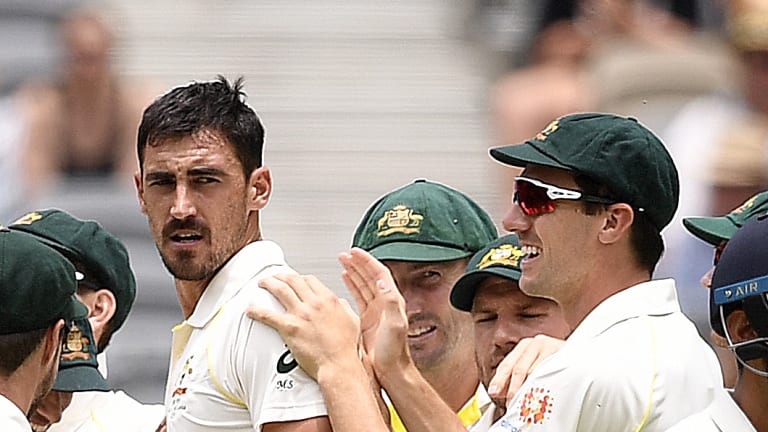 Milestone: Mitchell Starc is on the verge of taking his 200th Test wicket.Credit:AAP

The emphatic win in Perth, Australia's first in seven Tests, has eased the pressure on Tim Paine's men but selectors are not without issues.

Aaron Finch insists he will be fit to play in his home Test but revealed he needed painkillers to resume his innings after retiring hurt with a finger injury. He did not take to the field in India's run chase.

Peter Handscomb, who is facing a challenge from all-rounder Mitchell Marsh for his position after four low scores, says he has had enough of the talk over his unorthodox technique.

In a sign of Starc's growing confidence after being strongly criticised leading into the second Test, the left-arm paceman took aim again at Warne, who claimed the paceman was playing for his place in the XI in Perth.

Starc claimed match figures of 5-125 from 41 overs and is now just only wickets shy of becoming only the second left-armer, and 17th player, to take 200 Test wickets for Australia. He is poised to join the exclusive club in Melbourne.

"He's been on my back since I made my debut, so I don't really care what Shane says," Starc said.

"I'm not going to pay attention to him. As long as the coach, the captain, the team and the staff are happy with the role I'm playing and I'm doing that job for the team, that's what matters to me.

"People outside can say what they want. They've been on my back for eight years, it's not going to hurt me if they keep going for the next few years anyway."

Paine's removal of Starc from the attack after only two overs with the second new ball in Adelaide was seen as a sign of the captain's wavering faith, but the pace ace bowled more than any of the big three quicks in Perth.

He's been on my back since I made my debut, so I don't really care what Shane says.

Starc had played only one first-class game leading into the series but with two Tests, and 82 overs, now under his belt he should be approaching peak condition.

Starc insists he is not being hampered by the foot and leg injuries which cut short his tours of India (2017) and South Africa (2018) but said the footmarks in his delivery stride created issues.

"The Indian bowlers bowled a lot around the wicket so the surface was really uneven on my side of the wicket for the left-handers, so it was trying to flatten those out with the groundsmen," Starc said.

"Here [in Perth] there was a nice big plate crack through the middle of the crease there and it was pretty uneven again so I was bowling into a little bit of a hole. It does get a bit uncomfortable but there's no problem with my foot or my ankle."

Finch feared he had broken his right index finger after the Mohammed Shami hit, which he said was his third in a month.

"This time it was a solid hit and blew up as big as it has before," Finch said. "I couldn't bend it, struggled to hold the bat without a few jabs in there."

Finch described not fielding was a precautionary move, and was confident he would prove his fitness in the nets.

"None [no doubt] in my mind at all," Finch said. "I'm sure we'll have to wait and see what the selectors say, though."

Handscomb defended batting so deep in his crease after being trapped plumb in front.

"Sick of it? Pretty much. It's my technique, I've had it now for five years," Handscomb said.

"Little things here and there that I'll do with it but people have to talk about something, I understand that, but it's getting a bit much."