Emerging batting rock Travis Head has vowed to learn from the temptations of Perth, declaring he cannot jeopardise his team in key moments by falling into an opposition trap.

Head, who debuted against Pakistan in October and impressed with his tenacity in Dubai, has a pair of half-centuries in two Tests against India, the second coming in the first innings of the breakthrough victory of Perth. 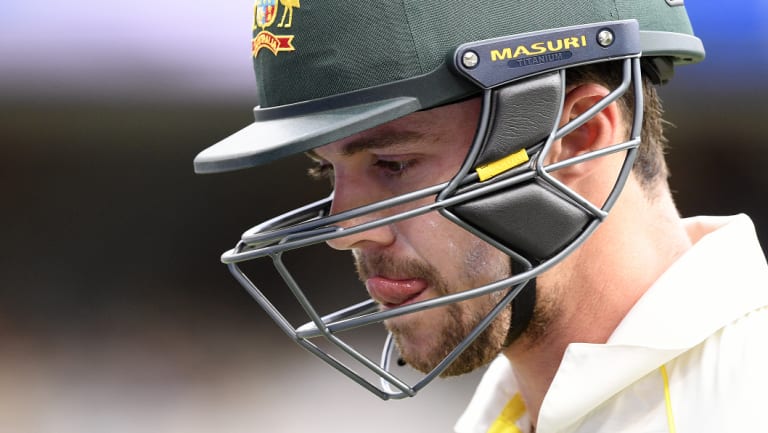 Travis Head has made several strong starts against India.Credit:AAP

The South Australian strokemaker had been well on his way to a maiden Test century when on 58 he was caught at third man by Mohammed Shami, slashing at Indian spearhead Ishant Sharma. He had been scoring at an excellent clip of 72.5 runs per 100 balls, with six boundaries to that point.

In Australia's second innings, the No. 6 was snapped up for 19 in similar circumstances, this time with Shami the bowler and Sharma completing the catch. His dismissal left the home side vulnerable at 4-120 before a fighting performance by skipper Tim Paine and the tail eased any concerns.

Head, the Redbacks skipper and touted for national leadership honours, said he would learn from his downfall heading into the Boxing Day Test at the MCG.

"[It was] very disappointing in the second innings. I think the first innings, yes, disappointing, to get out the way I did but I thought we changed the momentum of the game, leading up to that [second] new ball," he said.

"But very disappointed in the second innings, to get out that way. I have to learn from that. You can't get out that way, you can't be doing that, especially in the moment of the game.

"The wicket [in Perth] was a bit different, obviously the pace of the wicket, I thought I could take on the game a little bit more. [I will] learn from that. We are going to Melbourne which is, obviously, a good batting wicket – back to how I batted in Adelaide."

At Adelaide Oval, Head was the middle-order talisman the home side craved. His 72 was the only half-century of a team total of 235.

The tourists learned a thing or two and, in the second innings, he was dismissed by a brute of bouncer from Sharma which could well have split him in two had had the delivery not popped off the shoulder of the bat and ballooned to gully where an easy catch was taken.

The tourists did use the short ball on Head in Perth but not as often as he had expected on a fast deck, for the tourists had been guilty of – and criticised for – pitching too short early in Australia's first innings.

"They bounced me after Adelaide and they used a couple of different tactics in the innings. I have experienced that in the past in Shield cricket but, again in Melbourne, it will probably be a slower wicket than Perth was," Head said.

While they knotted the four-Test series with a 146-run win, the Australians have several issues to debate heading into the biggest day on the cricketing calendar.

Aaron Finch will need to prove in the nets his sore right index finger can negotiate a full match while fellow Victorian Peter Handscomb is under pressure to retain his spot.

All-rounder Mitch Marsh, his career at a crossroads, has declared he is ready to return should the selectors feel more bowling help is required.

As the home team prepares to head into camp on Saturday, Head – who will turn 25 on the fourth day of the Melbourne Test – said energy would continue to be a key.

"We will try to continue that on Boxing Day."