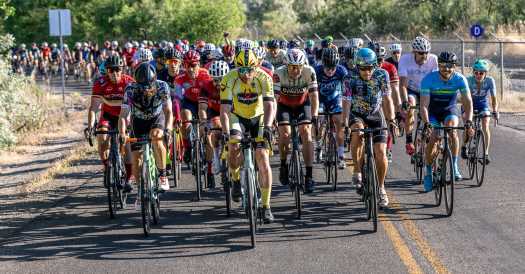 LINDON, Utah — James Lawrence slipped into a public pool in the Rocky Mountains before dawn this month, just as he had for the past 98 days. He was dressed in a sleeveless wet suit, a swim cap and tinted goggles.

His powerful strokes were slow and easy. And Lawrence, 45, did not swim solo. He had pacers, the other lanes packed with Lawrence’s fans and followers. Whenever he stopped swimming to take a sip from his water bottle, they all froze and stared in his direction. When he started up again, they did too.

They were mesmerized by Lawrence, the triathlete known as the Iron Cowboy, who had traveled 140.6 self-propelled miles every day since March 1, starting at 5:30 each morning and ending at around 8:45 p.m. It was a daily regimen of 2.4 miles of swimming, 112 miles of cycling and a marathon on foot, or the equivalent of a full-distance triathlon, the type made famous by the Ironman brand. 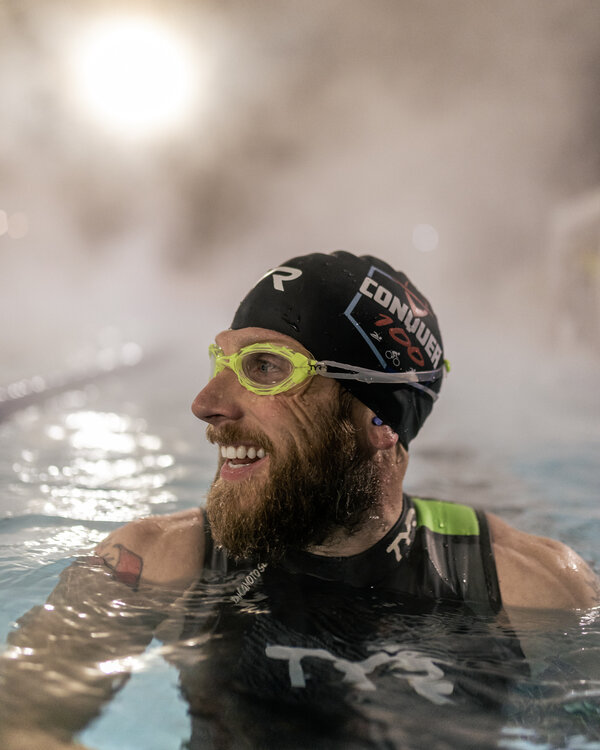 Lawrence titled his personal experiment in human endurance and pain tolerance Conquer 100, an attempt to show the capabilities of the human body and mind. “I’ll show you the example by being the example,” he said.

One man followed by completing 18 full-distance triathlons. Another lost 35 pounds while joining in dozens of swims, bikes and runs. A Ph.D. student in Dallas moved to Utah and did nearly 20 marathons with Lawrence.

What many of his followers may not have known was that Lawrence had a second purpose, one that has come under scrutiny. According to his website, Conquer 100 “aims to promote the work” of a Utah-based nonprofit organization, Operation Underground Railroad, which claims to travel the world rescuing child-trafficking victims. He said he has raised $250,000 for the group.

“We support the cause and think they do a lot of good,” Lawrence said. His wife, Sunny, added they were not aware of the investigation or the controversy around the group and chose it in part because it was a local charity.

But critics and media reports portray the organization as an outfit that overstates its accomplishments. Even its name draws criticism as it invokes the network of safe houses and secret passages used by Black people to escape slavery.

O.U.R. is run by Tim Ballard, who in 2019 was appointed by Donald J. Trump to an advisory council focused on ending human trafficking.

An investigation in The New York Times Magazine found that in February 2016, according to a court filing, a Justice Department official cautioned law-enforcement agencies against “being involved in, assisting or supporting operations with” Ballard’s group. More recently, Troy Rawlings, the prosecutor in nearby Davis County, Utah, confirmed to The Times that he has an open criminal investigation into Ballard and his nonprofit. No charges have been filed.

“O.U.R. has complied with all laws that regulate nonprofits and intends to cooperate fully with any official inquiry, if asked,” O.U.R. said in a statement that addressed the Davis County investigation, and other allegations.

There was no sign the athletes joining Lawrence knew of his support of the group, and he played down the charity, saying the challenge was about inspiring people, including himself, to go beyond their limits at a time of pandemic-induced limitations.

Hailey Ingram Jones, who participated after giving birth to her first child in January and had never done a triathlon, said she had heard of Operation Underground Railroad before, but she wasn’t drawn to Conquer 100 by Lawrence’s choice in charity. “I didn’t feel like anyone really ever talked about them,” Ingram Jones said. “I don’t think most people even knew that was a thing.”

In the first weeks of Conquer 100, Lawrence navigated icy late-winter roads, howling wind, snow flurries and freezing rain. By June, temperatures had soared above 90 degrees and the crowds had swelled. So had Lawrence’s lower lip. The sun and dry air had scorched it puffy, yellow and scabbed.

By then, Lawrence had come to think of the swimming portions as active recovery after his requisite five hours of fitful sleep. On June 7, Day 99 of Conquer 100, he inhaled blueberry pancakes in the shower at the local aquatics center. That day, he would also devour a Costco muffin, two breakfast burritos, two açai bowls, a ham sandwich, multiple fried chicken sandwiches, a turkey sandwich and piles of Chinese food from Panda Express.

The excruciating physical toll of the challenge had come earlier than Lawrence had hoped. On the fifth day, his left ankle pain radiated into his shin, forcing him to speed walk the marathons, finishing them in roughly seven hours.

Lawrence’s perseverance through his daily ordeal, which was documented on Instagram, inspired his Utah neighbor Takashi Inzunza, 39. In January, Inzunza was 60 pounds overweight and unable to play basketball with his son or volleyball with his daughter. He had never swam 25 yards in a pool before, but he joined the swim anyway. By Day 98, he had either swam, biked or run over 70 days with Lawrence and lost 35 pounds. That day, he completed the full distance.

Ingram Jones was adapting to a radically different life with a newborn. “I’d never swum laps in my life,” she said. “I had never even ridden a road bike before. And I was just feeling bad for myself. I kept saying, ‘I can’t, I can’t.’ And then one day, I just was like, ‘What the heck.’”

She borrowed a bike from her father and watched YouTube videos to develop a workable swimming stroke. Then months after giving birth, she completed the full distance, nursing her son during each transition.

Jacob Limburg, 18, and his brother Sam, 14, joined the effort to channel their grief. Their mother, Nancy, also a triathlete, died in August of breast cancer. Jacob did two full-distance triathlons and completed several marathons alongside Sam.

“I mean, you just get out there and you can’t sit around and worry about whatever’s going on,” Jacob said. “You just try to keep yourself entertained and push through the pain. Everyone else there is in pain, too. It’s like you’re all working together.”

The unexpected, galvanizing force of Conquer 100 is that it somehow made completing a full-distance triathlon feel doable. Lawrence never imagined that kind of ripple effect when he hatched his masochistic dream in October 2020. “It was the coolest byproduct,” he said.

By the end, on Day 100, the pool overflowed with swimmers, and more than 200 cyclists joined the ride. For the first time since his injury on Day 5, Lawrence was able to run — not speed walk — the marathon.

All was going well until the 19th mile, when he became jelly-legged. Lawrence described it as “total muscle failure.” Over 100 runners paused behind him as he was caught more than a dozen times in the last seven miles.

At around 5:30 p.m. on June 8, Lawrence descended from the local bike trail and ran through the gates onto the track at Timpanogos High School, where more than 1,000 spectators packed the grandstand. Among them were his wife and five children, friends, sponsors and representatives of O.U.R. Lawrence rounded the oval four times and covered the last half-mile at a pace below a seven-minute mile.

He crossed the finish line in tears.