Nakia Cockatoo will return to training ahead of teammates in the new year as he continues a steady build towards full fitness, but the Cats are not prepared to put a date on when they expect him to play.

Bedevilled by injury since being the No.10 pick in the 2014 national draft, the talented 22-year-old has played just 34 games in four seasons with the Cats. 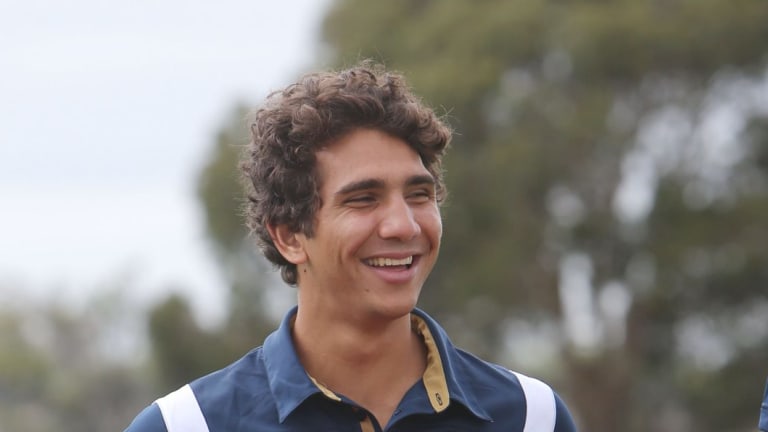 The Cats are not putting a time frame on Nakia Cockatoo’s return. Credit:Angela Milne

He played just two games, in rounds two and three, in 2018 before being sidelined with a knee injury. He eventually required surgery on his PCL after his attempted mid-season comeback via the VFL was aborted after 10 minutes of action.

Football manager Simon Lloyd confirmed at the club's AGM that Cockatoo, who had hamstring problems in 2017, had been recovering from his knee injury this pre-season and, apart from two weeks on the sidelines after a tonsillectomy, he is tracking reasonably well.

"He is now starting to do more. He has had a good week. His volume of running has increased," Lloyd said.

No date has been earmarked for his possible return with the Cats well aware of Cockatoo's injury history.

"We'll just wait and see as we go. It's one of those things where we try not to look into a crystal ball with Nakia," Lloyd said.

"We all know how great his best can be and we are just being patient to to try to get everything absolutely right."

Lloyd confirmed that Tom Hawkins suffered a lateral sprain to his ankle at training on Wednesday but he said he will be right to go when training resumes after the Christmas break while Sam Menegola is making good progress from post-season knee surgery. Zach Tuohy has also been spotted running laps at training in recent weeks as he overcomes a minor knee operation.

The Cats have adopted a hard-edged approach in the pre-Christmas period training for longer than this time last season and are ensuring they get drills right before moving on to the next phase of training.

Assistant coach Matthew Scarlett said the Cats had been stung by their eighth-placed finish in 2018.

"We have to work harder and smarter than the best teams of the competition because they have put a bit of gap on us," Scarlett said.

"The guys are highly motivated and they need to be because as we sit right now we're a mediocre team."