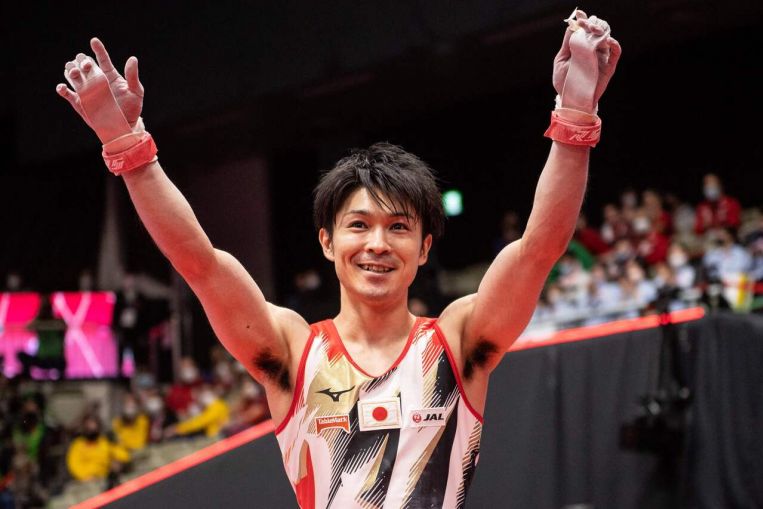 KITAKYUSHU, JAPAN (AFP) – Japanese gymnastics legend Kohei Uchimura said he would consider his future after finishing the world championships empty-handed on Sunday (Oct 24), but hinted his love for the sport may lure him back.

The 32-year-old finished sixth in the horizontal bar final – the only competition he entered this week to save wear and tear on his ailing shoulders.

The world championships were being held in his home town of Kitakyushu in western Japan, and some had speculated that he would call time on his storied career afterwards.

But he shrugged off talk of retirement, saying the competition had refuelled his fire.

“I can’t say anything about retirement at the moment – I need to take a rest and think about it,” said Uchimura, widely considered to be the best male gymnast in history.

“I was reminded tonight just how much I like gymnastics. I’m not feeling right now that I don’t want to do it any more. I was reminded how interesting it is.”

Uchimura dominated gymnastics for most of the previous decade, winning successive all-around Olympic titles in 2012 and 2016 and claiming 10 world championship golds.

But injuries have slowed him down in recent years, and he chose not to defend his all-around Olympic title in Tokyo this summer to focus on the horizontal bar.

Uchimura said he was “still confident” he could return to his former heights, but no longer felt he had to be gymnastics’ poster boy.

He pointed to the emergence of Japan’s Olympic all-around champion Hashimoto, and said gymnastics now has a “higher status” in the world.

“I always feel like if I’m going to compete, I need to aim to be the best in the world,” he said.

“But I got the slight feeling tonight that maybe I don’t have to play that role anymore, from watching Daiki and the others on the horizontal bar. There’s a new generation emerging from all different countries.”

Uchimura made some mistakes in his routine but pulled off a textbook landing, drawing wild cheers from his hometown crowd.

But he said his performances had not been up to scratch in training, and he was “reminded that practice is everything”.

“Just because it was being held in my home town or because it might be my last competition – that alone is not going to give me the strength to win at this level,” he said.

Elsewhere on the final day of the world championships, Carlos Yulo of the Philippines took the men’s vault title but lost out to Hu in the parallel bars.

Her compatriot Urara Ashikawa won in the balance beam.

Several top gymnasts, including American superstar Simone Biles, were absent from the world championships, which were being held in the same year as the Olympics for the first time in 25 years.