Crowd trouble marred Qatar's dominant 4-0 win against the United Arab Emirates on Tuesday (Wednesday AEDT) as a bitter political rift between the Gulf neighbours spilled onto the football pitch. 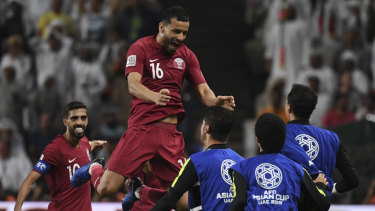 Those tensions of the dispute boiled over as Qatar, hosts of the 2022 World Cup, convincingly beat the UAE to book an Asian Cup final against Japan.

The noisy crowd of 38,646 at the Mohammed Bin Zayed Stadium in Abu Dhabi, the capital of the UAE, was, as expected, hostile to the Qatar side.

Emirati supporters threw sandals and plastic water bottles at Qatar players celebrating goals in each half, rare in what had traditionally been a hard-fought but respectful derby fixture until the start of the dispute.

Throwing a shoe at someone is considered a major insult in the Arab world, where it is rude to sit with the sole of a shoe pointing at someone. 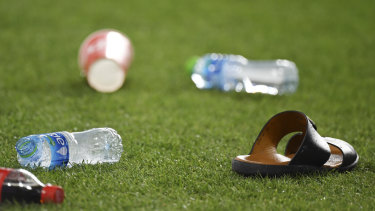 Statement: home fans threw shoes at the Qatari side, a major insult in the Arab world.Credit:AP

In other scenes rare for the Gulf game, the fans jeered throughout the Qatar national anthem with dozens of Emiratis sitting for its duration before standing for the UAE anthem.

UAE supporters had been bussed in from around the country with thousands of tickets given away to local fans but many started to head for the exits after Hassan al-Haydos put Qatar 3-0 up in the 80th minute.

Qatari nationals, who previously travelled freely in the Gulf, are banned from entering the UAE unless they receive a special permit.

As in their previous matches, the Qataris did have some support from a couple of dozen fans, including sympathetic Omanis whose country has taken a neutral stand in the diplomatic row. 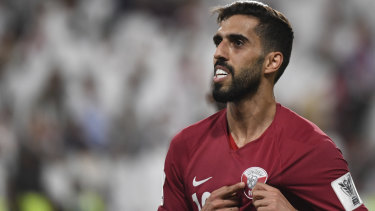 The small but happy band of away fans were held back in the stadium after the match for apparent safety reasons.

In the lead-up to the game, Abu Dhabi police had urged supporters to behave in a sportsmanlike and civilised manner without specifically mentioning the match.

Supporters, however, cheered Emirati defender Ismail Ahmed when he was sent off in stoppage time at the end of the match for an off-the-ball elbow to the face of a Qatari player.

It has been a jailable offence to "show sympathy" towards Qatar in the UAE since the start of the dispute, which government officials say is with the leaders of the neighbouring country and not its people.