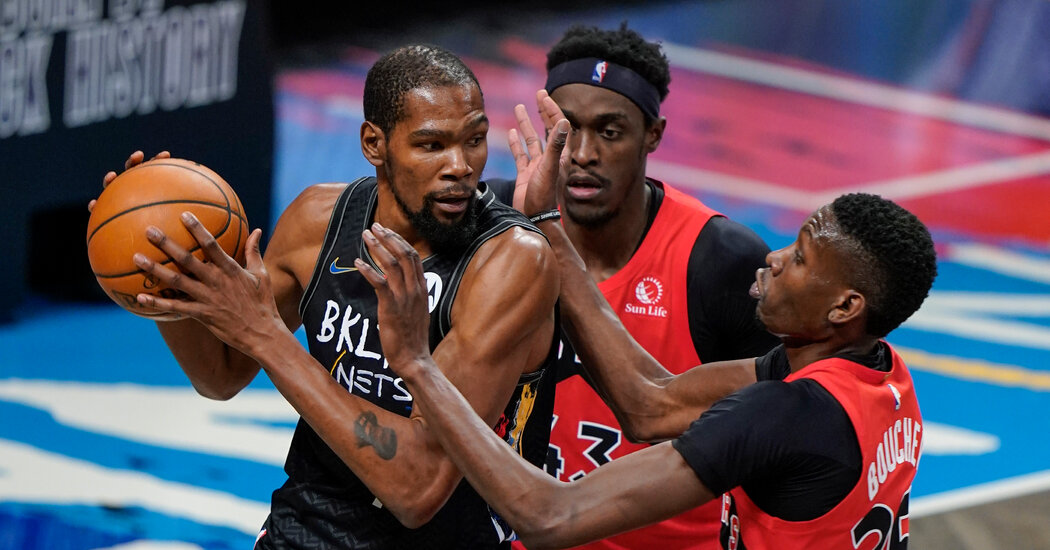 Multiple N.B.A. stars, including Giannis Antetokounmpo, Kawhi Leonard and Kevin Durant, added their voices to the growing chorus of players criticizing the league’s handling of the coronavirus pandemic, particularly plans to hold the All-Star Game in Atlanta on March 7.

“We’ve got to all follow the big dog,” Antetokounmpo told reporters on Friday night, referring to LeBron James, who this week said that holding the game would be “a slap in the face” for players. Echoing James, Antetokounmpo, the reigning Most Valuable Player Award winner, said he had “zero excitement, zero energy” for the game.

Following Antetokounmpo’s comments, Leonard, the Los Angeles Clippers forward, said he was not surprised by the league’s plans, but that it was “just putting money over health right now, pretty much.”

“We all know why we’re playing it,” said Leonard, a four-time All-Star. “It’s money on the line. There’s the opportunity to make more money.”

The All-Star events are a chance to showcase the N.B.A.’s top talent. There is also a financial benefit, although how much is unclear. This year, the league, in conjunction with the players’ union, is planning to hold the 3-point contest and the skills competition on the same day as the game to condense an affair that typically lasts days. The N.B.A.’s collective bargaining agreement requires those selected for the All-Star Game to play if they are healthy.

Nonetheless, a condensed schedule does not eliminate the added health risks of an event bringing together the game’s best players from across the country for an exhibition — and presents a sharp contrast to rules that bar players from sharing hugs and handshakes after games to help reduce the chances of infection spread.

The league’s protocols appear to be wearing on some players, including Durant of the Nets, who was pulled from a game on Friday night in a strange spectacle that played out on TV and social media. About 20 minutes before the Nets were to tip off against the Toronto Raptors, the Nets announced that Durant would not start the game because of the league’s virus protocols. Just after the game started, the Nets announced that Durant had been cleared to play. But then, after Durant played a little more than 19 minutes, he was pulled from the game and ruled out because of the protocols.

Shortly after leaving the game, Durant posted on Twitter, “Free me.” He had appeared frustrated on the TV broadcast as he walked out of the arena after being removed from the game, tossing a water bottle to the side as he walked into the tunnel.

The N.B.A. then released a statement to The Athletic, saying that Durant had tested negative for the coronavirus three times in the past 24 hours but had “interacted” with someone who first had an inconclusive test result before the game on Friday, then a positive result during the game. An inconclusive test, according to the N.B.A.’s protocols, does not necessarily require quarantine, so Durant was allowed to play. But when the positive result came in, the league pulled Durant “out of an abundance of caution.”

In response to the statement, Durant tweeted: “Yo @nba, your fans aren’t dumb!!!! You can’t fool em with your Wack ass PR tactics.”

Mike Bass, a spokesman for the N.B.A., told The New York Times that the All-Star Game “has been an important tradition throughout the history of the league and remains one of our top events for global fan interest and engagement. The health and safety of everyone involved is at the forefront of our discussions with the Players Association.”

The players’ union declined to comment, but Chris Paul, the Phoenix Suns guard and president of the players’ union, told reporters on Friday: “Guys are entitled to their feelings, their decisions, everything. I think the job for the union has been to try to make sure our players are healthy and safe.

Paul also said that he had previously spoken to James about the topic.

The league has struggled to contain virus outbreaks this season. The N.B.A. has postponed 23 games in connection with infections and contact tracing, and has stationed security guards on the court before and after games to discourage players from socializing. Only five of the league’s 30 teams have not had a virus-related postponement.

On Jan. 12, the league and the players’ union announced new health protocols to deal with a rash of game postponements. Among the new rules, players and staff have been directed to remain at their homes or hotels when on the road except for team activities and essential tasks. After a recent game between the Miami Heat and the Nets, a security official interrupted Nets guard Kyrie Irving’s attempt to exchange jerseys with the Heat’s Bam Adebayo — much to the bafflement of Irving. (Irving slipped a jersey to Adebayo after their next game two days later.)

Others players have weighed in on the All-Star game as well. On Friday, Jayson Tatum of the Boston Celtics, who was selected to his first All-Star team last season, said: “I feel like, for the most part, they have done a great job of trying to keep us safe,” referring to the league, “though you can’t control everything. But I do understand the concerns about it, especially in Atlanta.”

His teammate Kemba Walker, a four-time All Star, told reporters on Friday that he agreed with James.

“He’s a smart man,” Walker said. “He’s been around. He’s a leader. A lot of things he says are correct. He feels the way he feels. I’m probably going to be on vacation.”

Earlier in the week, De’Aaron Fox, the top guard on the Sacramento Kings, said holding the game would be “stupid.”

“If we have to wear masks and do all this for a regular game, then what’s the point of bringing the All-Star game back?” Fox told reporters. “Obviously, money makes the world go ’round so it is what it is.”

For the moment, the N.B.A.’s virus-related game postponements have died down. The most recent one was on Monday, when the Detroit Pistons and Denver Nuggets were supposed to play in Denver. Two days later, the league said in its weekly report that no new players had tested positive for the coronavirus. The week before there had been one case, a sharp reduction from the 27 reported over the two weeks prior. In January, several teams were missing multiple players because of infections and contact tracing, but now most teams are no longer missing anyone for that reason.

N.B.A. players — like much of the country — are under enormous mental strain, as Draymond Green of the Golden State Warriors said in a podcast interview that was posted on Friday. He said this season has been particularly difficult with longer days as a result of daily testing and restrictions in the league’s protocols.

“Even on off days, you have to go to the facility and test,” Green said. “And so even just seeing that facility that day, although you may not even go in and work out, but you drive into that facility every day. Mentally, it’s exhausting and so it’s been a very tough season to say the least, and I think a lot of guys are struggling with it.”

Want the most up-to-date celebrity exclusives sent straight to your inbox every day? Sign up now and join the club!...