LANDOVER, Md. — Saquon Barkley was so upset at himself about dropping a pass he apologized to the rest of the Giants’ offense.

“I went to line, quarterback, wide receivers and I said: ‘That series is on me. I’m going to make up for it. I promise you guys,’ ” Barkley said. “And we were able to do that.”

Barkley more than made up for that early mistake, rushing for 170 yards, including a 78-yard touchdown, to surpass 1,000 for the season to lead the Giants to a 40-16 rout of the Redskins on Sunday to effectively end Washington’s slim playoff hopes.

Barkley gashed the Redskins’ defense for 12.1 yards a carry to become the first Giants rookie to break 1,000 and set a single-season franchise rookie record with his 13th touchdown. The second overall pick also had four catches for 27 yards against a Washington defense that is a shell of the unit that led the league early in the season.

“We’re starting to figure out that kind of this offense runs through him,” said quarterback Eli Manning, who threw for three touchdowns. “When we’re running the ball well, it just sets up everything else. It sets up the play action and it sets up so much.”

Manning, with the star receiver Odell Beckham Jr. out with an injury, was 14 of 22 for 197 yards in helping the Giants take a 34-0 halftime lead before giving way to the rookie Kyle Lauletta early in the fourth quarter. Lauletta, the Giants’ fourth-round pick out of Richmond, was 0 of 5 with an interception in his N.F.L. regular-season debut.

Sterling Shepard, Bernie Fowler and Russell Shepard caught touchdown passes from Manning as the Giants (5-8) put up 40 points in a game for the first time since Nov. 1, 2015, and won for the fourth time in five games.

The Giants intercepted the new Redskins quarterback Mark Sanchez twice, with Curtis Riley returning one 9 yards for a touchdown in the first quarter. It was Sanchez’s ninth career interception returned for a score. 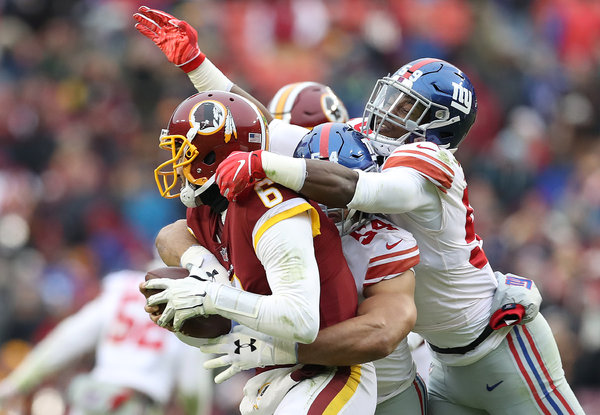 Sanchez, a former Jets quarterback making his first N.F.L. start since 2015, was 6 of 14 for 38 yards. His passer rating was 10 yards, and he did not have a completion longer than 10 yards. He was sacked five times behind a patchwork offensive line as the Redskins (6-7) lost their fourth in a row.

“It was tough sledding, for sure,” Sanchez said.

Coach Jay Gruden pulled the plug on his appearance with five and a half minutes remaining in the third quarter. After the game, a reporter wanted to know what Gruden thought “went wrong” for Sanchez.

“What did work?” Gruden responded. “There was nothing that worked. Nothing worked. So everything did not work.”

In came the newly signed Josh Johnson, the Redskins’ fourth quarterback this season. Johnson had not appeared in an N.F.L. game since 2013 or thrown a pass since 2011.

Signed after Alex Smith and Colt McCoy each broke a leg and because of his familiarity with Gruden’s offense, Johnson completed 11 of 16 passes for 195 yards, a touchdown and an interception and ran for 45 yards and his first career rushing touchdown.

Gruden said Johnson would start the next game, at Jacksonville.

“We’ll get Josh ready to go,” Gruden said. “I think the element that he brings is a little bit of knowing the system.”

The quarterback situation is far from the only pressure on Gruden. There were frequent boos from a FedEx crowd listed at 57,347 — about 25,000 under capacity — and all the blue Giants jerseys in the stands, linebacker Alec Ogletree said, made it “feel like we’re at home.”

There was the penalties: The Redskins committed two of them on the first punt of the game by the Giants, and were flagged 15 times for 135 yards over all.

The offensive line struggled against a team that entered the game with only 19 sacks. And the defense gave up the 34 first-half points to the Giants, which were only four less than their high for an entire game this season.

Asked whether he was concerned about his job, Gruden replied: “My job’s in jeopardy every week. So I’ve just got to go about and do the best I can, get these guys ready to go.”