With all 20 Premier League clubs playing twice in the space of the past four days, it is was another hectic – and entertaining – Christmas period.

Liverpool thrashed second-placed Leicester and then edged past Wolves to move 13 points clear at the top of the table.

Meanwhile, Manchester United and Everton – the latter under the guidance of new boss Carlo Ancelotti – also earned back-to-back wins, while Southampton and Watford picked up four-point hauls to help their battles against relegation.

With that in mind, I have considered players for my team of the week who performed well in each of their two games, but who were exceptional in at least one of them.

Here’s my team – have a read and then select your own below. 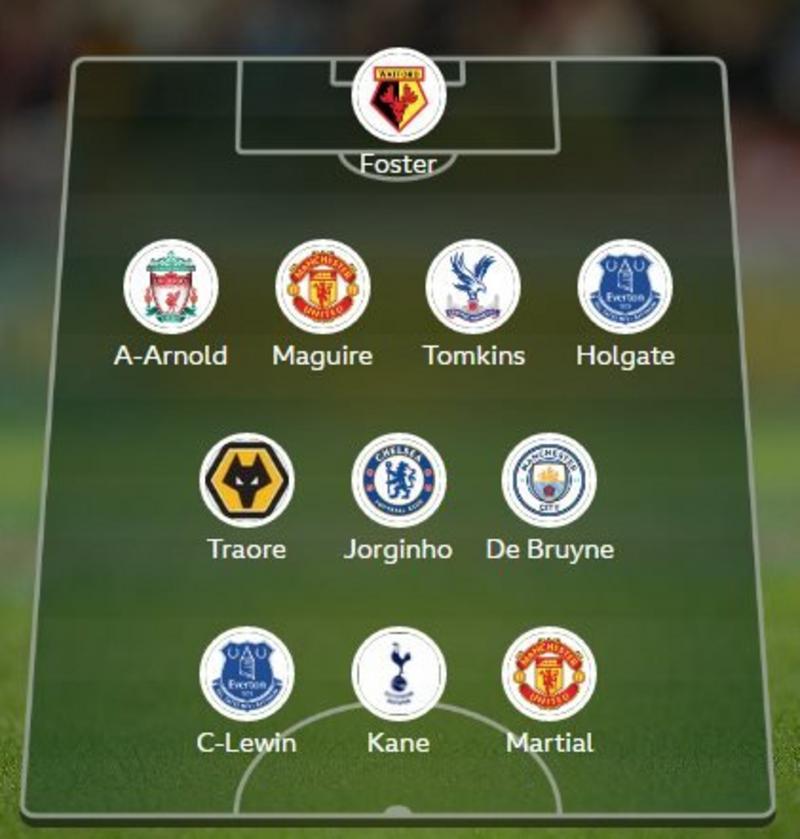 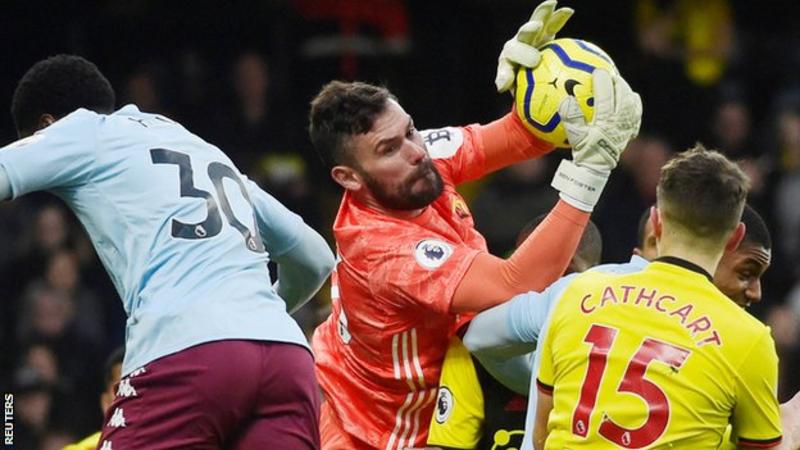 Foster: Two fantastic saves by the 36-year-old former England goalkeeper from David McGoldrick and Oli McBurnie in the first half against Sheffield United not only kept Watford in the game but were tantamount to getting them a valuable point. Foster then continued his form against a rather spiteful Aston Villa with a superb save from Wesley in the opening exchanges and a clean sheet. Seven points from three games is the sort of form that will keep the Hornets in the Premier League and new manager Nigel Pearson in a job. 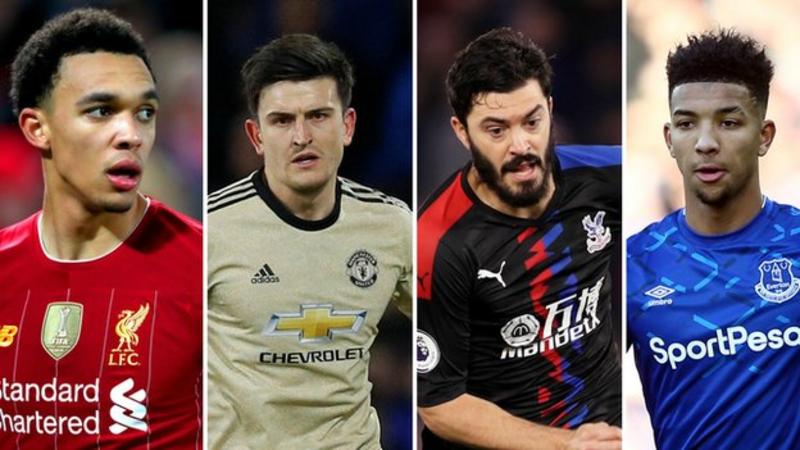 Alexander-Arnold: After his performance against Leicester I was in no doubt that this rather precocious talent had to be in my TOTW regardless of what took place against Wolves. Two assists and a sumptuous goal did it for me. Liverpool came back from a long roundtrip to Qatar where they won the World Club Championship, only to return to the Premier League and demolish Leicester City. Alexander-Arnold was the main cause of the hosts’ downfall. In fact it was that bad, Leicester were practically chased out of their own town.

Did you know? Alexander-Arnold has created more chances than any other defender in the Premier League this season (57).

Maguire: This was a return to something like the form we’ve come to expect from Harry Maguire. The Manchester United defender, who was captain for the fixture against Newcastle, looked comfortable once his side took control of the game. The armband is a further indication of how quickly Maguire has found his feet at Old Trafford and a hint of what Solskjaer actually thinks of him. Against Burnley the England international was at the heart of an excellent clean sheet, limiting the hosts to only a handful of chances.

Did you know? Maguire has made 55 headed clearances in the Premier League this season, only Burnley’s James Tarkowski has made more (60).

Tomkins: This is a player who quietly gets on with the business of defending and seldom gets the limelight or the credit his performances often deserve. The Crystal Palace defender played every minute of the four points gained by his side over the festive period. He was a tremendous influence in their victory over West Ham and scored a brilliant headed goal to earn the Eagles a point away at Southampton.

Did you know? Tomkins has made more clearances than any other Crystal Palace player in the Premier League this term (73).

Holgate: The Everton youngster is looking like the real deal these days. The defender was part of a superb defensive display against Burnley and was inspirational away at Newcastle. This young man can play anywhere across the back four and did so brilliantly twice in a matter of 48 hours. He also kept Andy Carroll quiet for 90 minutes. Six points for the Toffees over the Christmas period and Everton now sit five points away from a top six spot. I told Arsenal they should have gone for Carlo Ancelotti. Too late now.

Did you know? Everton have won 46% of their Premier League games this season when Holgate has featured, compared to just 14% when he hasn’t played a part. 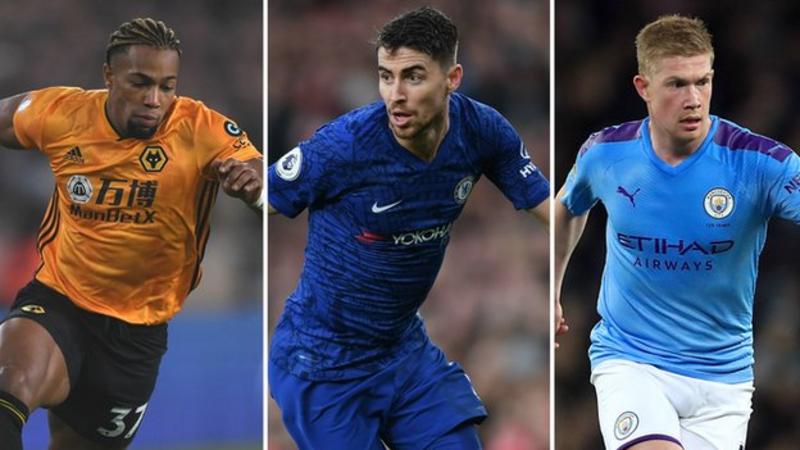 Traore: This fella completely turned the 3-2 win over Manchester City on its head. Traore not only got Wolves back into a match that was quickly drifting away from them but set up the equaliser having caught Benjamin Mendy sleeping on the job. What then took place was quite unbelievable. How did City, having been two goals up with a man sent off and after scoring from the rebound of a retaken penalty, manage to lose the game? And why? All because Pep Guardiola brought off a furious Kevin de Bruyne, the one man who could have saved them the match. Even great managers get it wrong sometimes.

Jorginho: The debate will centre around whether Jorginho should have remained on the pitch after he appeared to pull the shirt of Lucas Torreira which could have resulted in a second yellow card. Referee Craig Pawson refused to send Jorginho off and gave a free-kick, much to the annoyance of Alexandre Lacazette. To see a player trying to get another professional sent off is a shameful spectacle and Pawson did well to book the Arsenal player for getting involved. Jorginho went on to dominate the midfield and score the goal that was the turning point in the game. Read more about what I have to say about the role of the referee in The Crooks of the Matter below.

Did you know? Jorginho has completed more passes than any other Chelsea midfielder in the Premier League this term (1,105).

De Bruyne: I think it only fitting that my final team selection of the 2019-20 season includes the Manchester City midfielder who is, without a doubt for me, currently the best player in the country. The game against Sheffield United was almost as controversial as the fixture against Wolves for various reasons but De Bruyne seems above all that. He is a consummate professional. However, as Liverpool’s grip on the Premier League title gets tighter with each game, City must treat this footballing genius with great care. Players like De Bruyne need to be winning trophies on a regular basis – receiving awards at the Ballon d’Or, and not being dragged off on a manager’s tactical whim. And certainly, not when the likes of Real Madrid and Barcelona are watching every move.

Did you know? De Bruyne has been directly involved in 19 goals in the Premier League this season (seven goals and 12 assists) – only Jamie Vardy has had a hand in more (20). 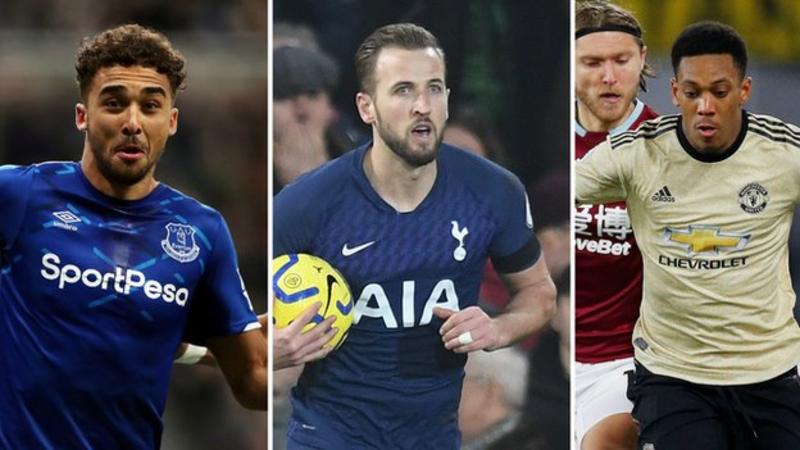 Calvert-Lewin: The Everton forward couldn’t hit a barn door six months ago and now he can’t stop scoring. To be fair to Calvert-Lewin it took fired-up caretaker boss Duncan Ferguson to really inspire this kid. Since Ferguson occupied the hot seat the young striker has not looked back. Five goals in five league games tell its own story. Carlo Ancelotti’s arrival can only be good for Everton and Calvert-Lewin. He’s put Burnley and Newcastle to the sword in a matter of days. I also think it was an inspired decision by Ancelotti to play Moise Kean alongside Calvert-Lewin. This could develop into quite a partnership.

Did you know? Calvert-Lewin is Everton’s top Premier League goalscorer this season with eight goals – it’s also the most the Englishman has ever scored in a single top-flight campaign.

Kane: Unlike Dele Alli you do know what you’re going to get from Tottenham striker Kane – total commitment, no sulking and a regular return of goals, and the England captain didn’t disappoint against Brighton. What looked like a routine finish was anything but. The same was true when he saved the day for Tottenham at Carrow Road. Once Kane stepped up to take the penalty you knew Spurs were assured of a point. Kane to the rescue once again.

Did you know? Only Alan Shearer (145) and Sergio Aguero (138) have scored more Premier League goals in their first 200 appearances in the competition than Harry Kane (136).

Martial: I think I saw Anthony Martial smile over the Christmas period. This lad only seems happy when he’s scoring goals. Against Newcastle he bagged two and his second was gorgeous. I was beginning to have my doubts that Martial was the right man to lead the line for Manchester United. However, I must admit the France international has handled both United’s festive fixtures with a certain authority. Watching the way he collected the ball from Andreas Pereira and slotted the pass into the Burnley net with such confidence, I may have to review my position.

Did you know? Martial has scored more Premier League goals (41) and had more goal involvements (61) than any other Manchester United player since his debut in September 2015.

You’ve seen my selections this week. But who would you go for?

The Crooks of the Matter

The festive period has once again produced some extraordinary results. It is also the most demanding period in our domestic calendar.

As we enter the second phase of the season it’s important to assess one of its most significant changes. VAR has been by far and away the most important development in our game’s history.

Has it worked? Well, I will leave that thought with you but what I can tell you is, it’s here to stay. I wish it wasn’t, well, not in its current form. Referees must take back control of the game and not leave the most important decisions to some faceless bureaucrat in some far and distant outpost.

That VAR should interfere with a referee’s ‘opinion’ is monstrous. Clear and obvious mistakes yes, but his ‘opinion’ is a gift the game affords the referee only. To try and take it away from him is an outrage.

The most the game should ask the referee to do is to look at the incident again to see if his ‘opinion’ has changed or did he miss something in real time that has now become clear and obvious in the replay.

The incident involving Son Heung-min, for example, when he lashed out at Antonio Rudiger is a classic example. The referee in real time thought, in his opinion, that the offence didn’t warrant a red card. Some might have disagreed with him, including those in Stockley Park, but that’s the referee’s opinion.

Another referee might see the same incident totally differently and he would be entitled to that also. We were told that VAR was there to ‘assist’ the referee, not overturn his decision. What has taken place, by those pressing the buttons, is bordering on a coup d’etat and Fifa should stop it.