LOS ANGELES — They were just five players among the many who arrived for the N.B.A.’s “rookie transition program” in 2003, with no way of knowing they would have such successful careers or outlast their peers.

Zaza Pachulia, a center from Georgia who had been drafted by the Orlando Magic, was just getting to know the others — LeBron James, Dwyane Wade, Kyle Korver and Carmelo Anthony — a little bit, at least. They were weeks from entering the league together, along with about 40 other young men. But before then, they had to acquire some life skills, courtesy of the N.B.A. program.

“It was shocking to me how many new things I learned there,” Pachulia said in a recent interview.

Those five players would emerge as key members of one of the most celebrated draft classes in league history — a class that would produce nine All-Stars — and they are the only five who remain from a fraternity that has thinned with each passing season.

“There’s a bit of pride, especially as the years go on, that, ‘Hey, we’re still doing this thing,’ ” said Korver, a 37-year-old forward with the Utah Jazz.

The spotlight simultaneously encompassed two of them recently when Wade, who has announced that he will retire at the end of the season, made the trip to Los Angeles with the Miami Heat to face James and the Lakers at Staples Center. Barring an unlikely matchup in the finals — the Heat are struggling — the Lakers’ win was the final meeting between James, a four-time Most Valuable Player, and Wade, a 12-time All-Star.

Their legacies are intertwined, of course: As Heat teammates, they won two titles with a third star, Chris Bosh, who was the fourth pick in the same draft. (Bosh, who has said that he hopes to make a return, has not played since 2016 because of a lung ailment.)

“The N.B.A. was in a good place when we came in, but it wasn’t in a great place,” Wade said. “So I think we gave the league a little bit of a jolt.” 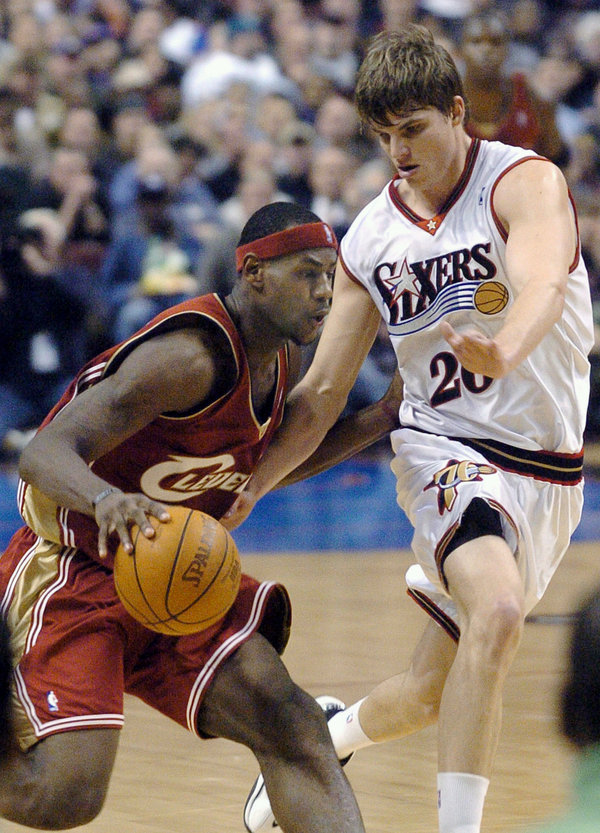 The 2003 draft, which took place just months after Michael Jordan played his final game, was extraordinary. James, the No. 1 pick, went to the Cleveland Cavaliers, while Darko Milicic, one of the great busts of all-time, went second to the Detroit Pistons. Anthony was picked third by the Denver Nuggets, and Wade fifth by the Heat.

Though Pachulia and Korver slipped to the second round, they have had high-level careers, and they share a unique bond with the other players from their class who continue to plug along — for now, if not forever.

“I have so much respect for those guys,” Pachulia said. “I’m not as close to what they’ve done with the numbers or the stats. But as far as love of the game, I’m sure I can still definitely compete. There’s a reason why I’m still here.”

Back when it all began, Wade heard James before he actually met him. It was the spring of 2003, and Wade was waiting to be examined by doctors in a small room at the N.B.A. pre-draft camp in Chicago. Everyone knew about James, who had been a high school phenom. But Wade, who was coming off two seasons at Marquette, was still curious about him.

“So I’m just in this room by myself, and in comes this loud kid with a bunch of people following him — and he’s loud,” Wade, 36, recalled in an interview. “So we eventually introduced ourselves, and then it was just me and him in there waiting, you know? Getting to know each other a little bit.”

Wade said he could sense an instant connection, though their conversation was cut short when James was summoned for his exam first, leaving Wade to wait even longer. It was an indication, perhaps, of James’s precocious grip on the league.

Pachulia, who had been playing in Turkey, arrived for the draft at Madison Square Garden in a new suit. He did not receive an invitation to sit in the “green room,” which is typically reserved for lottery picks, so he sat in the bleachers. But he was still expecting to go in the first round after his agent had advised against his entering the 2002 draft.

“Just wait another year,” Pachulia recalled his agent telling him. “It’ll be an easier draft in 2003.”

Now, as he settled in for a night that would surely change his life, Pachulia watched as the draft played out. The names kept coming: Chris Kaman, Kirk Hinrich, Nick Collison, David West. And coming: Boris Diaw, Kendrick Perkins, Leandro Barbosa, Josh Howard. And coming, deep into the second round: Luke Walton, Steve Blake, Willie Green.

Pachulia came to the realization that it was not, in fact, an easier draft.

When Orlando finally made him the 42nd pick, Pachulia was greeted by Adam Silver, then the deputy commissioner. Silver asked Pachulia if he was excited about visiting Disney World. Pachulia forced himself to smile.

“I thought not getting picked in the first round was the end of the world,” he says now.

All these years later, as he contributes for the Pistons in his 16th N.B.A. season, Pachulia, 34, knows better. He has made a career out of being a fierce competitor — “He will mess you up,” Wade said, using a more colorful verb — and a consummate professional, winning two championships with the Golden State Warriors.

“There’s just not a better teammate than Zaza,” said Korver, who played with Pachulia for a season in Atlanta.

Korver’s draft night experience was similarly precarious — and so were his workouts before the draft. He recalled getting filleted by elite prospects like Wade.

“Teams kept putting me against the best athletes available to see if I could guard them,” Korver said. “By the end, my confidence was just — I don’t know, man.”

Korver watched the draft on television with friends in his dorm room at Creighton. A crew from a local television station also showed up. The night dragged on as players like Matt Bonner (No. 45 to the Chicago Bulls) and Mo Williams (No. 47 to the Jazz) were selected in the second round.

“I think everyone was like, ‘What do we do if he doesn’t get picked?’ ” Korver recalled.

He eventually went 51st to the New Jersey Nets during a commercial break, which meant that he only got the news when the broadcast resumed and he saw his name crawl across the bottom of the screen. But even the pick itself was a misdirection. The Nets sold his rights to the Philadelphia 76ers, who were led by Allen Iverson.

“It ended up being a beautiful thing for me,” Korver said.

Iverson’s ability to draw multiple defenders often created space for Korver on the perimeter, and he emerged as one of the best long-range technicians of his generation.

“The longer I’ve been in the league, the more I realize it’s not so much what number you get picked at but the situation you get drafted into,” Korver said. “Are you a good fit? Do get you that chance? I always tell guys, ‘You have to get that chance, and you have to take advantage of it. Once you do, be on time, work hard, be a good person and don’t do drugs. If you do those things, you can play for a while in this league.’ ”

Most players’ skills decline after 16 seasons, and often years before. Wade, for example, is on his way out, and contenders have not lined up to acquire Anthony from the Houston Rockets after his failed 10-game experiment with them. James, who will turn 34 this month, remains the outlier, a basketball cyborg who is somehow maximizing his physical gifts in N.B.A. middle age.

While it is easy to dismiss James as a genetic freak — “And he is,” said Korver, who played with James in Cleveland — few players are more regimented: all the daily stretching and weight lifting and core work, along with the single-minded focus on diet.

“His diligence with those things is amazing,” Korver said, “and he’s done them every day for a really long time.”

James was not always so committed. He recalled how he could roll out of his bed in his early 20s and play without stretching or warming up. But he has figured out how to ward off the corrosive effects of his profession.

“I can’t afford to take a day off when I’m not doing something with my body,” James told reporters recently.

He is a marvel to his peers, including Pachulia, who — like so many others — has read reports about how much James invests in his body every year.

“Like, over a million dollars? It pays off, you know?” Pachulia said. “I’ve got to be honest: I don’t spend that much on myself.”

But Pachulia is no less committed to the game, and he says he still has a passion for the work.

“I keep it very simple, because there’s no secret: It’s love,” Pachulia said. “If you don’t love something, it’s impossible to be in this situation for such a long time.”

One of Pachulia’s more enjoyable rituals is sipping a double espresso before every game. Before he appeared in his 1,000th game, he did the math.

“I thought, ‘Wow, that’s a lot of coffee,’ ” said Pachulia, who has now played in more than 1,100 games, including the playoffs. “We have another game coming up, and I’m telling you: I can’t wait. I can’t wait to push the button and for the espresso to come out.”