A ray of light has emerged for swimmer Shayna Jack as she fights to save her career after testing positive to the banned anabolic agent Ligandrol.

The 20-year-old was sent home from a training camp in Japan ahead of last month's FINA World Championships in Korea and could face as long as four years out of the sport if ASADA hit her with the maximum penalty. 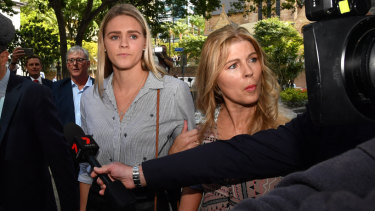 Swimmer Shayna Jack (left) and her mother Pauline leave the briefing with ASADA earlier this month.Credit:AAP

Anti-doping agencies have had little inclination to show leniency to those caught with the selective androgen receptor modulator, known as LGD-4033, in their system. Most have been given four-year bans, while Japanese swimmer Junya Koga recently had his suspension reduced to two years after appealing to the Court of Arbitration for Sport.

Even that length of time would represent a huge setback for Jack, but a new case from the United States will give her legal team more than a glimmer of hope should they adopt a similar defence when they present their case to ASADA over the coming weeks or months.

On Monday, USADA, the American anti-doping body, announced that Olympic karate hopeful Joane Orbon had been banned for nine months following her positive test for di-hydroxy-LGD-4033, which is a metabolite of LGD-4033 – the same substance that has landed Jack in hot water.

The 24-year-old was able to convince USADA that the adverse outcome to her in-competition test in January was the result of a contaminated dietary supplement. Orbon was able to provide USADA with details of the supplement in question, which she said she had been using when she provided a urine sample.

A lab accredited by WADA (World Anti-Doping Agency) was able to find evidence of LGD-4033 in some contaminated batches of the product in question. It had not been listed on the label and the contamination was taken into account when USADA handed down their final sanction.

Jack has suggested that a supplement may have been a factor in her tests, which were taken during a training camp in Cairns before she left with the Australian team for Japan. Her lawyer, Melbourne anti-doping specialist Paul Horvath, has not disclosed their defence publicly.

Like Orbon, they would need to provide detailed information about potential sources of contamination and hope any investigations would unearth evidence that Jack had ingested the substance, which is reputed to build muscle mass and shred fat, unwittingly.

Jack has maintained her innocence from the moment the positive test was made public and vowed to leave no stone unturned as she embarks on a fight to save her career after it had barely begun.

Four years out of the sport would almost certainly put an end to any serious aspirations of returning to the elite echelons of the sport but anything under 12 months would represent a dream result for the swimmer and her team of supporters.

It would mean she would miss the Tokyo Olympic Games but could reset as a 21-year-old and plot a path towards a pair of World Championships, a Commonwealth Games and the next Olympics in Paris in 2024.

How closely Jack's case replicates that of Orbon remains to be seen. But should investigations suggest there had been some contaminated supplements involved in the adverse finding, Horvath could show a precendent that would suggest the hardline sanctions around LGD-4033 were starting to soften.