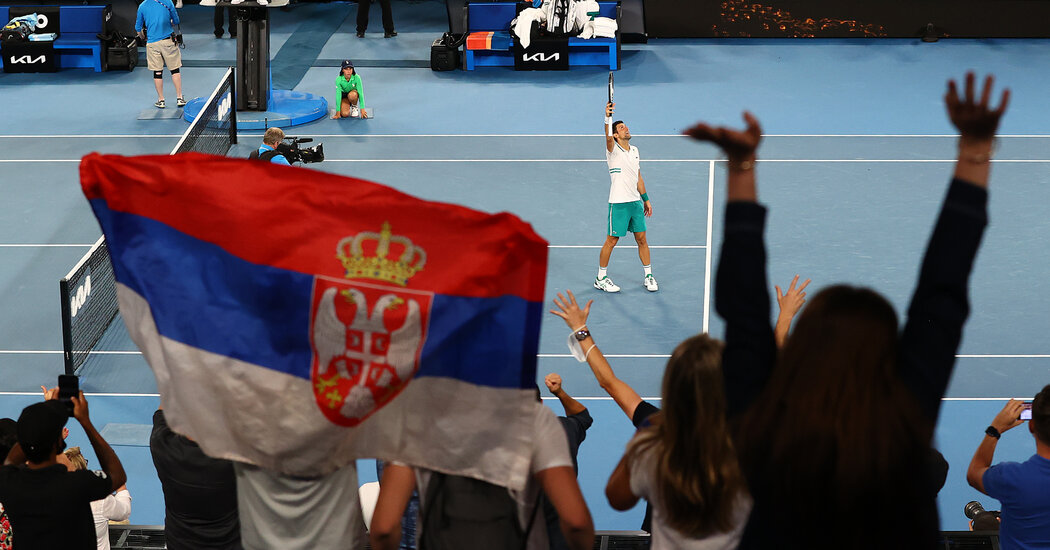 MELBOURNE, Australia — Everything changed for Novak Djokovic in a split-second explosion during the third set of his Australian Open quarterfinal this week.

With the match tied at a set apiece, Alexander Zverev of Germany, one of the top young players in the world, was serving with a 3-2 lead. Djokovic could not convert his chances to tie the set, failing on a key point to get one of Zverev’s signature 135-mile-an-hour serves back over the net.

There was no shame in that. But Djokovic thought otherwise and took the frustration out on his racket. He slammed his Head Pro Stock to the ground with three violent whacks, smashing the frame and spraying shards across the back of the court. The sound of the destruction, like a bone snapping, echoed through the empty stadium.

It was the sort of outburst that usually signals the beginning of the end for most players. For Djokovic though — this time, at least — there was a rebirth, as he seemed to release all the tension that had been building for weeks.

First, quarantine restrictions wreaked havoc on preparations for the Open, the year’s first Grand Slam event. Then an injured abdominal muscle nearly forced Djokovic out of the tournament. And at that moment on Tuesday, one of the game’s most dangerous players had him in a high-octane fight.

Yet Djokovic, the top-ranked player in the world, grabbed a replacement racket, won four straight games to take that third set, then pushed through a tooth-and-nail fourth to advance.

“I wouldn’t recommend this kind of relief channeling,” Djokovic said a few hours after the match.

He said he wasn’t proud of his behavior. But tennis forces a journey through many different emotions, and Djokovic has demons to fight, he explained, the tension building with every lost point and game. Eventually the pressure has to find a release.

Every tennis player who assumes the top ranking in tennis endures special pressures. The ones who survive over the long term generally work hard to minimize their stress by avoiding anything that might distract them from the pursuit of continued success.

Perhaps more than any of his predecessors, though, Djokovic, 33, goes toward the heat. He knows the hazards that may bring. But he is willing to manage the consequences of his behavior, which could involve trying to stage a tennis event in the first months of the pandemic; on-court outbursts, including one that led to his disqualification at the U.S. Open; or pressuring the Australian Open tournament organizers on behalf of 72 players who ended up confined to their hotel rooms for 14 days after arrival in Melbourne because on their flights they had been exposed to people with the coronavirus. His recommendation for an early end to their lockdown and access to tennis courts at private homes, among other impossible-to-meet demands, garnered widespread ridicule.

“I think Novak feels an obligation as the top-ranked player in the world to be a voice for the players,” said Craig Tiley, who is the chief executive of Tennis Australia, which runs the Open, and who fielded those demands, rejected nearly all of them, then did his best to carry out Djokovic damage control.

In spite of it all, this tournament has given Djokovic what he so often finds when he plays in Melbourne — the chance to right his ship and jump start his tennis year.

In the final on Sunday, he will play Daniil Medvedev of Russia, who has not lost a singles match since October. “He’s the man to beat,” Djokovic said of Medvedev. A victory then would give Djokovic a third consecutive Australian Open singles championship and a record ninth over all. He has never lost in a final here.

The script this year has hardly followed its traditional form.

Djokovic angered local residents with his pretournament demands, and the rowdy support he often receives from fans here nearly disappeared, except from pockets of native Serbians who faithfully show up each year to watch their compatriot. He injured an abdominal muscle during his third-round match and appeared on the edge of elimination before he prevailed in five sets.

Djokovic has used the injury and those of other players to ignite another controversy, citing them in his criticism of the people who run professional tennis and insisting that special arrangements are going to have to be made for the tours to continue amid all the travel restrictions and fears related to the spread of the virus. He raised the possibility of a series of bubbles, like the one the N.B.A. created last year in Florida, arguing that travel-related quarantines would compromise players’ safety because they would have to compete after getting limited training time.

“There’s too many injuries,” Djokovic said. “A majority of the players just don’t want to go ahead with the season if we are going to have to quarantine before most of the tournaments.”

That may or may not be true, and plenty of players cannot afford to forgo a season. Djokovic, who has collected nearly $150 million in prize money plus many lucrative endorsements, has no such worries.

Rafael Nadal, Djokovic’s (usually) friendly rival, has taken a different tack, arguing that the first priority is for everyday people to be safe and that there are bigger problems in the world right now than where and how he can compete.

“We need to be grateful to life that we can keep doing what we are doing,” Nadal said after his heartbreaking, five-set loss in the quarterfinals to Tsitsipas. 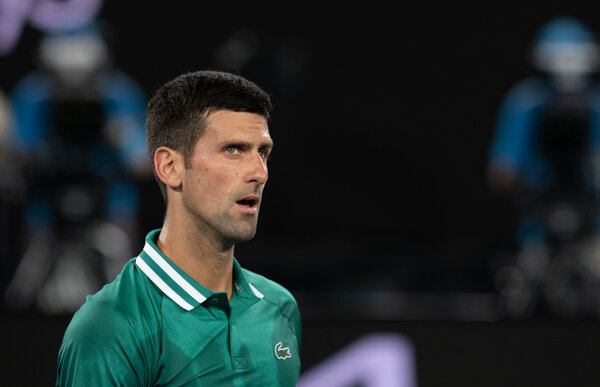 Amid it all, on the court Djokovic is rounding into form at the perfect time, pressuring his opponents on their serve as no one else can.

“It’s one of the most difficult things in our sport, holding your serve against Novak,” Zverev said.

In the semifinals, Djokovic mostly had his way with little-known Aslan Karatsev of Russia. No surprise there: Karatsev, who had to go through qualifying rounds, is the world’s 114th-ranked player. But he pushed Djokovic to within a point of coughing up a 5-2 lead in the second set and had the crowd pulling for him throughout.

On his magical run to the final four, Karatsev knocked off the eighth-seeded Diego Schwartzman; Felix Auger-Aliassime of Canada, a rising star and the No. 20 seed; and Grigor Dimitrov, the No. 18 seed, who had back spasms after winning the first set. Djokovic, Karatsev said, was on another level entirely.

“A huge difference,” Karatsev said. “He does not give you any points, even on my serve, long rallies.”

Whatever frustration Djokovic felt during the match, and it appeared he had little, he expressed it during his usual one-way discussion in Serbian with his support team.

When it was over, he pointed to the sky and to all four sides of the arena, performing his ritual gesture of giving his heart to everyone in the crowd.

Another win would give him an 18th Grand Slam singles title, pulling him within two of Roger Federer and Nadal, who share the men’s record. It would also be sweet vindication after this long, turbulent journey.

“It took a lot out of me,” Djokovic said of this Australian Open. “I was exhausted, especially after Zverev’s match, but I was thrilled to overcome those huge challenges. I knew that once I triumphed over Zverev that things will be better, will get better for me. I just had that kind of inner feeling and proved to be right.”

In Australia, he often is.