LAS VEGAS — The Mets may have faded from relevance after a hot start last season, but the arrival of the off-season has placed them in the middle of the major-league rumor mill — especially at the annual Winter Meetings this week.

Some rumblings are true, like the Mets’ interest in trading for the Miami Marlins’ All-Star catcher, J.T. Realmuto. Some ideas are simply that, like discussions with the Yankees about the Mets’ star pitcher Noah Syndergaard as part of a three-way trade — which caused a major stir when it circulated around social media on Monday night.

This is all a result of the hyperactive nature of the Mets’ new general manager, Brodie Van Wagenen. Leading into his first Winter Meetings as a G.M. after a career as a player agent, Van Wagenen said Omar Minaya, a special assistant with the Mets and a former general manager, gave him some advice.

“He told me to pace myself,” Van Wagenen said Monday evening. “I didn’t listen to him. I don’t sleep very much and I probably talk to too many people too often. But that’s part of my personality. That’s the fun part.”

Fun, perhaps, if you are a Mets fan without an emotional attachment to any particular players.

Not that the Mets hired Van Wagenen, 44, to tear down the team and rebuild. They, and he, want to compete for a playoff spot now: His blockbuster trade for second baseman Robinson Cano and closer Edwin Diaz earlier this month showed he was serious about that goal. And Van Wagenen hasn’t showed any signs of slowing down.

First, let’s tackle the Syndergaard possibility. The Yankees, who were outbid for the free agent pitcher Patrick Corbin, have said they want to improve their pitching staff. While Syndergaard could fulfill that goal, the image of their young star wearing pinstripes would be hard for Mets executives, let alone fans, to stomach.

But that has not stopped Van Wagenen, aggressive and seemingly unconcerned by any past Yankees-Mets trade tension, from at least kicking around a scenario, among many others, in which the Yankees would get Syndergaard and the Mets would receive Realmuto from the Marlins.

Realmuto would instantly solve multiple issues for the Mets. As one of the better catchers in baseball, he would bolster their pitching and defense — a top concern for Van Wagenen — while also adding a potent right-handed batter to a lineup full of left-handers. Syndergaard, 26, had a 3.03 E.R.A. in nearly 154 innings last season and is three seasons away from free agency. Realmuto, 27, hit .277 with 21 home runs and is two years away from becoming a free agent. 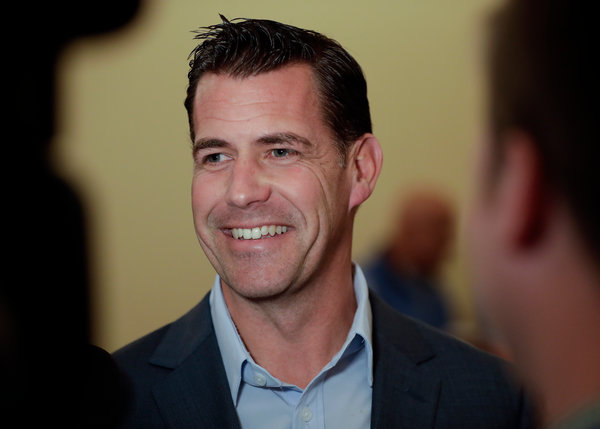 But it wouldn’t be simple. Aside from the typical complications of a three-way deal and the politics of a trade with the Yankees (the Mets and Yankees had some prickly trade discussions over Jay Bruce and Neil Walker in 2017), dealing away Syndergaard would seem to conflict with their goal of building around their primary strength: the starting rotation.

There could be other routes to acquiring Realmuto, however.

The rebuilding Marlins possess leverage because many teams covet Realmuto, but they are also motivated to trade him sooner rather than later to maximize their return. The Marlins are seeking young major-league players in return for Realmuto, and shortstop Amed Rosario or outfielder Brandon Nimmo fit that bill.

Fair, but could the Mets, in turn, fill any holes created by a trade with a trade or a free agent signing, like a defensive-minded shortstop or right-handed outfielder?

The Mets have been operating on many fronts at once; Van Wagenen, for example, has already stated his interest in the free agent A.J. Pollock, a talented but oft-injured former Arizona Diamondbacks outfielder.

Although Van Wagenen said he believed Realmuto’s trade market would pick up this week, he was looking at other plans, too. The Mets have checked in on, among others, the following free-agent catchers: Martin Maldonado, Yasmani Grandal and Wilson Ramos. The Mets met with Ramos in person here in Las Vegas on Tuesday.

And to cap their to-do list, the Mets have also made acquiring more bullpen help a priority this winter.

Now, it’s time to wait for the pieces to fall where they may.

Perhaps something will happen this week, since the Mets’ full contingent of decision makers is in Las Vegas. Jeff Wilpon, the Mets’ chief operating officer and part of the family that owns the team, does not regularly attend the Winter Meetings, but Van Wagenen asked him to come this time.

Van Wagenen said that was because the Mets have many balls in the air, and if a trade or signing suddenly evolved, he wanted Wilpon to be on hand to assist or sign off.