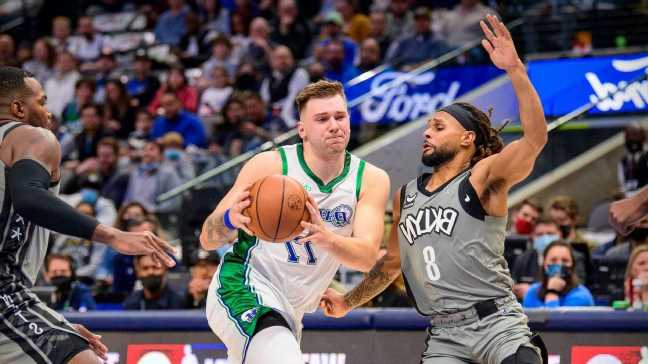 The ESPN fantasy and betting cheat sheet is your pregame destination for our best intel and data to help you make smart fantasy and wagering decisions. NBA game odds are provided by Caesars Sportsbook, and fantasy advice is based on ESPN 10-team leagues.

Jump ahead: Game of the night | Picks and props | Analytics edge

What you need to know for Wednesday night’s NBA slate

By Jim McCormick and Kyle Soppe

Nothing but net: The Nets have had a player eclipse 50 points in consecutive games, and while it’s unlikely that you can find a player to do that off the wire, Bruce Brown (80% available) has been productive when given the opportunity. Brown has averaged 16.3 PPG on 50% shooting to go along with 6.5 RPG and 3.5 APG when playing at home. The Mavs’ elite defense figures to key on Kevin Durant tonight, so look for the extended usage to continue for Brown at Barclays Center.

Thunder up: Darius Bazley (83% available) has averaged 22.7 PPG, 6.3 RPG, 3 assists and 3 3-pointers over his past three games. The Thunder face a Spurs team that sits 27th in defensive rating over the past 10 games and Bazley should play heavy minutes in a plus matchup.

Blazing values: Portland’s injury report lists seven players ruled out for tonight’s matchup in Madison Square Garden against the Knicks. Jusuf Nurkic and Anfernee Simons join Damian Lillard in street clothes for this one, which means Josh Hart (44% available), Trendon Watford (84%) and Drew Eubanks (97%) are positioned for a big game. Hart has become a league-winning waiver addition in recent weeks, while Watford has posted at least 22 points in three straight and can deliver on scoring and rebounding props. Meanwhile, Eubanks has averaged 36 points and 22 rebounds across his past two games.

Gold rush: The Nuggets face a Wizards team that has allowed 119.7 points per 100 possessions to opponents over the past 10 games, the third-most points in the league during that time frame. With Aaron Gordon questionable, Will Barton (43% available) is thriving as a complementary scorer and should help fantasy managers in all formats.

Getting Garland: Evan Mobley faces a stiff challenge against Joel Embiid with Jarrett Allen still sidelined, but Darius Garland is poised to be a DFS building block against a 76ers team that couldn’t keep him out of the paint earlier this month. Even at $9,000, there’s room for value with Garland. He posted 66.5 DraftKings points in the loss at Wells Fargo Center a few weeks back. It’s also a good spot for Kevin Love to fire from beyond the arc, as the 76ers lack size at forward.

Game of the Night

Notable: That’s now four straight unders in Dallas games (unders are 11-5 over their past 16).

Fantasy Streamer: Dorian Finney-Smith. Finney-Smith is an excellent streamer against the Nets with Reggie Bullock out. He has scored 10 points or more in six of the Mavs past seven games and from a betting perspective, you should consider taking his over at 11.5 points. — Eric Moody

Best bet: Kevin Durant over 29.5 points. Kyrie Irving led the way offensively for the Nets against the Magic last night and Durant will fill that role against the Mavericks tonight. Dallas allow opponents to take a lot of midrange shots. Durant’s midrange jumpers are a high percentage of his field goal attempts. He’s made 54% of them this year. — Moody

Notable: The Celtics defense gets a lot of attention and it’s been great, but the offense is making up for it in the betting market: overs are 8-3 in Boston’s past 11 games.

Notable: The Hawks enter this game having failed to cover the spread in each of their past six games.

Best bet: De’Andre Hunter over 14.5 points. Hunter has averaged 17.6 PPG and 33.2 MPG over the past seven games. Hunter is also available in 87.6% of ESPN leagues, so fantasy managers can stream him. Small forwards have had success against the Hawks this season. This position has averaged 22 points per game against Atlanta. — Moody

Best bet: Trae Young over 43.5 points + assists + rebounds. Young has averaged 33 PPG, 10.2 APG, and 4.2 RPG over the past five games. The statistical fun should continue against a Hornets team that ranks 19th in points allowed per 100 possessions, allows lots of offensive rebounds and opponents to shoot a high effective field goal percentage. — Moody

Fantasy Streamer: Brandon Goodwin. With Rajon Rondo out, fantasy managers should consider streaming Goodwin. While it was disappointing that Goodwin (99.8% available) played only 12 minutes on Monday night against the Clippers, he will continue to serve as the Cavaliers’ backup point guard. — Moody

Best bet: Tobias Harris over 21.5 points + rebounds Harris has averaged 15 PPG, 6 RPG, and 36 MPG over his past seven games. He has been relegated to a secondary offensive role due to James Harden’s arrival and Tyrese Maxey’s excellent play but should succeed against the Cavaliers considering the matchups he will face. — Moody

Notable: Seven straight Washington games have gone over the total and the Wizards have failed to cover each of their past four.

Notable: Houston is evaluated as a struggling team, and yet, they continue to struggle ATS. The Rockets have covered just five of their past 17 (5-11-1).

Fantasy Streamer: Cameron Payne is still available in more than 60 percent of leagues, and he shouldn’t be. In his last seven games, he has averaged 16.6 PPG, 9.9 APG, 4.1 RPG, 2.1 3PG and 1.3 SPG. He should be a nightly starter in every league. — Snellings

Best bet: Nuggets (-5.5). The Wizards have lost four straight games by an average of 10.5 PPG. Three of those losses were to struggling teams that are a combined 1-15 in their recent games. Meanwhile, the Nuggets are hot (winners of 11 of their last 14 games) and desperately trying to catch the Jazz at the top of the division. Denver also will enter into tonight’s game with an optimistic mindset after receiving news that Jamal Murray is close to a return. — Snellings

Notable: Both teams had a player recently crack the 50-point plateau, but it’s been the Timberwolves that have been the more profitable team to back recently, as they’ve covered eight over their past nine games.

Best bet: Timberwolves (-8.5). The Timberwolves have won eight of their last nine games and each of their last seven victories have been by at least nine points (average 22.6 points margin in those seven wins). Some of those wins have been against very strong teams like the Heat and Warriors. The Lakers are going in the opposite direction, losers of eight of their last 10 games with five of their losses being by more than nine points (average 14.2 points margin in those eight losses). — Snellings

Best bet: Jakob Poeltl over 25.5 points + rebounds. Poeltl has averaged 17 PPG, 9.4 RPG, and 31.5 MPG over his past 10 games. Oklahoma City presents a good matchup for him. Centers have averaged 21 PPG and 18 RPG against Oklahoma City this season. — Moody

Notable: Five straight, and eight of nine, Chicago games have gone under the projected total.

Notable: The Kings aren’t perfect, but they are 4-1-1 ATS over their past six games and are getting plenty of points tonight.

Best bet: Grayson Allen over 9.5 points. Allen has been a solid contributor on the Bucks and has averaged 11.2 PPG this season. The Kings have allowed the most points to shooting guards (24.6 per game), so Allen is likely to succeed. He is a viable streamer in deeper formats as well. — Moody

Notable: The Raptors have followed four straight ATS losses with four straight covers. Over that eight game sample, six under tickets have cashed.