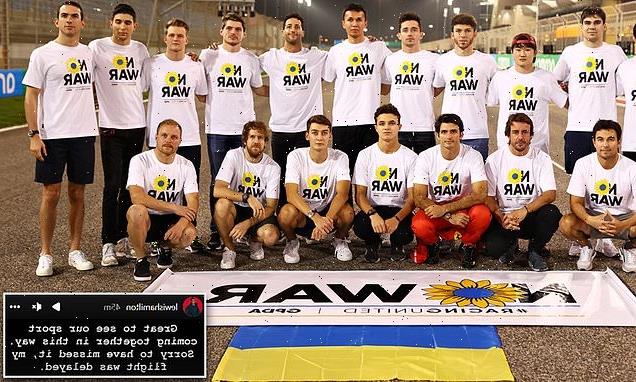 ‘No War’: Formula One drivers gather for photo ahead of pre-season testing in Bahrain to show their support for Ukraine after the invasion of Russia… though Lewis Hamilton is unable to take part after his flight was delayed

Formula One drivers sent a strong message in support for the people of Ukraine after the invasion of Russia as they gathered on the eve of pre-season testing in Bahrain to plead for peace.

Drivers lined up in two rows wearing shirts with the caption ‘No War,’ while a banner saying the same thing was lined out on the track in front of them – behind a Ukraine flag.

The Mercedes driver in his most recent Instagram story confirmed the reason why he was unable to be there with his fellow drivers.

Sharing a picture of the drivers, he said: ‘Great to see our sport coming together in this way.

‘Sorry to have missed it, my flight was delayed.’

Despite missing out on the show of support, Hamilton should be ready for the start of testing in Bahrain – which gets underway on Thursday. 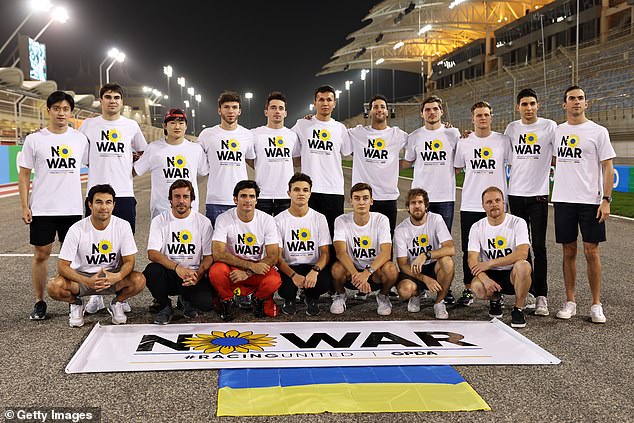 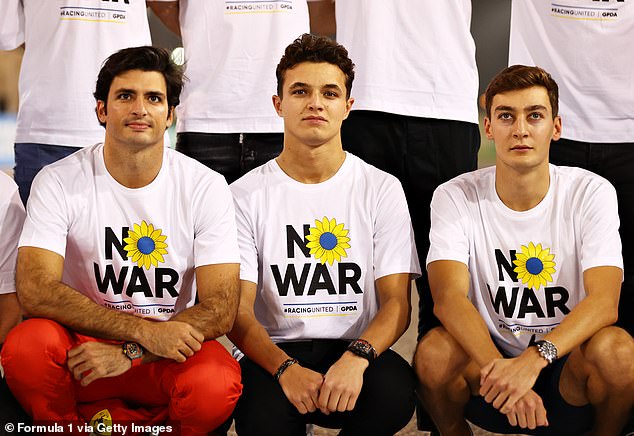 The drivers including Carlos Sainz, Lando Norris and George Russell all wore t-shirts with the caption ‘No War’

Hamilton has regularly posted on social media since Russia’s invasion of Ukraine, today commenting: ‘My heart is with the couragous people of Ukraine who are standing firmly with their values of freedom and peace.

‘I’m certain I’m not alone in feeling our day to day feels heavier, and sometimes trivial, knowing this crisis is happening in our world.’

Another driver who was absent was new Haas signing Kevin Magnussen.

The Danish driver who had been replaced at the team for the 2021 season, has returned after the US based outfit parted ways with Nikita Mazepin and Russian sponsor Uralkali. 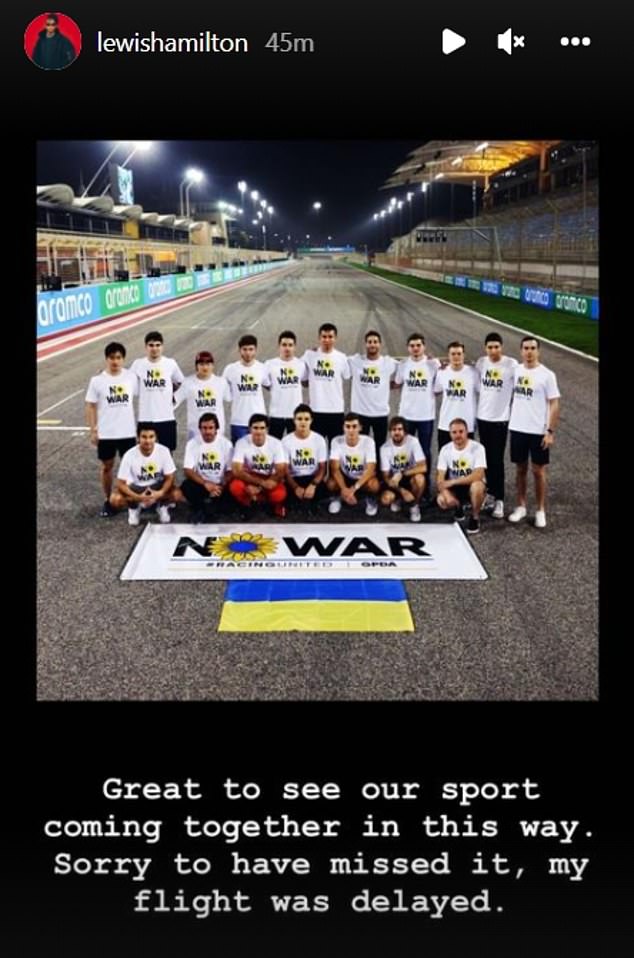 Announcement of Magnussen’s signing was not made until after the photo had already been taken.

Speaking at a press conference on Wednesday, Mazepin revealed his fury over the way he was dismissed, claiming he felt safe in the team after the first pre-season test in Barcelona until he was suddenly fired.

According to journalist CezaryGutowski, he said: ‘First of all, I want to say that I understand that the world is not like it was two weeks ago. It was an extremely painful time for both you and me. People who are not here see it from a different angle. We in Russia and Ukraine see it’s on many other levels.

‘I was planning to start as a neutral athlete. The FIA allowed it. I had no problem with that, but the night before my contract was terminated, additional directives came out and as we started to analyse them, I got a message the next morning that the contract was cancelled. I was fired.

‘I deserved more support from the team. I was relieved to see that the FIA allowed us to start in neutral colours. I was hoping to drive. Then everything changed and I lost the dream I had been working for for 18 years.

‘I heard about my Haas sacking, like everyone else, from the press. I didn’t deserve it. 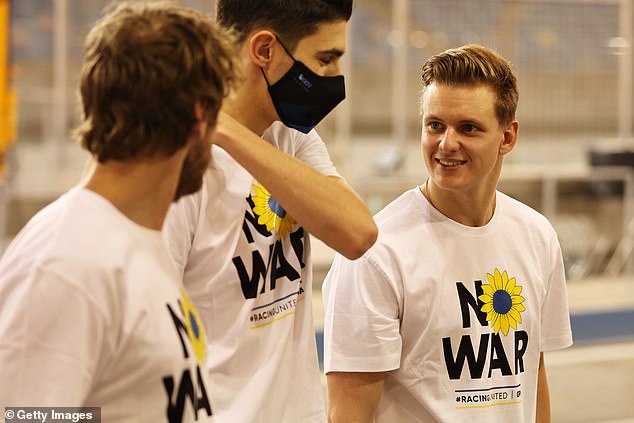 The drivers will take to the track on Thursday for the final few days of pre-season testing (Sebastian Vettel, Esteban Ocon and Mick Schumacher pictured) 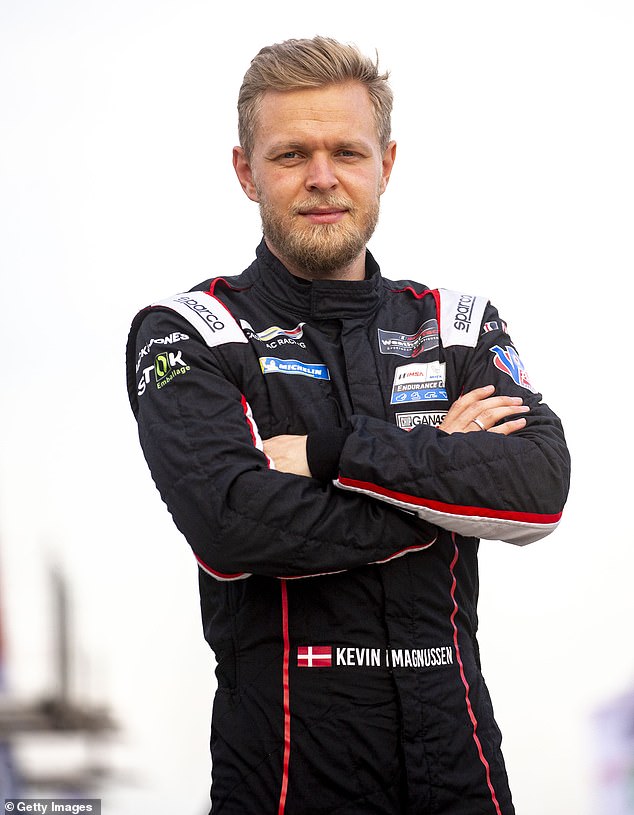 ‘I was very disappointed with how it played out. I hadn’t been worried since I left Barcelona.

‘Formula One is not a closed chapter for me. I will be ready to race in case there is an opportunity to return. I wish all the best to the drivers who will replace me. They have nothing to do with the existing situation.’

The contract of the Russian Grand Prix has also been cancelled after drivers including four-time champion Sebastian Vettel and 2021 champion Max Verstappen had called for the race to not take place this season.

As reported by ESPN, Ferrari confirmed on Tuesday meanwhile that they will donate €1 million to Ukraine amid Russia’s ongoing invasion of the country.